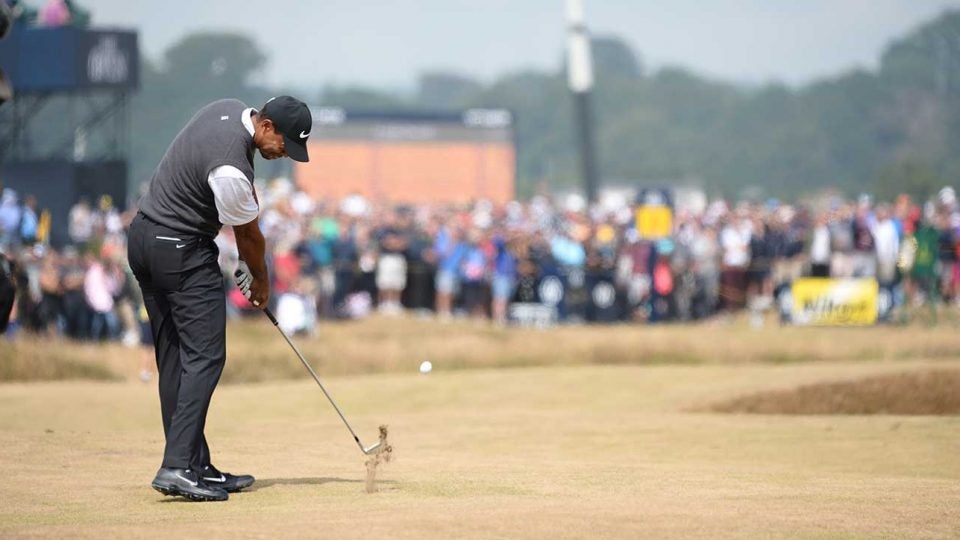 Tiger Woods hits a shot during the third round of the British Open.
Angus Murray

Tiger Woods opened the third round of the British Open six shots off the lead but went on a tear to put himself in contention to win his 15th career major title come Sunday.

Woods, who was even after 36 holes, shot a five-under 66 on Saturday at Carnoustie and finished just two strokes off the lead with the leaders still on the course. Hours later the stage was set for Sunday: Woods is five under, four behind 54-hole co-leaders Jordan Spieth, Xander Schauffele and Kevin Kisner. Kevin Chappell is at seven under and Francesco Molinari is at six under. Woods headlines a group of seven players tied at five under.

Woods’s 66 was his lowest major round since he shot 66 in the second round of the 2011 Masters.

The 14-time major champ made six birdies and just one bogey on the day as he took advantage of his most accurate driving round of the week. He rolled in a 10-footer on 4 for his first birdie of the day and knocked in a six-footer for birdie on the 6th.

He closed his front nine with a 40-foot birdie bomb on the 9th, which was the first of three straight birdies.

Another birdie on 14 was erased with a bogey on 16, but Woods ended his round with back-to-back pars through Carnoustie’s difficult closing stretch. His drive on 18 barely missed the burn, but he hacked out, wedged on and saved par.