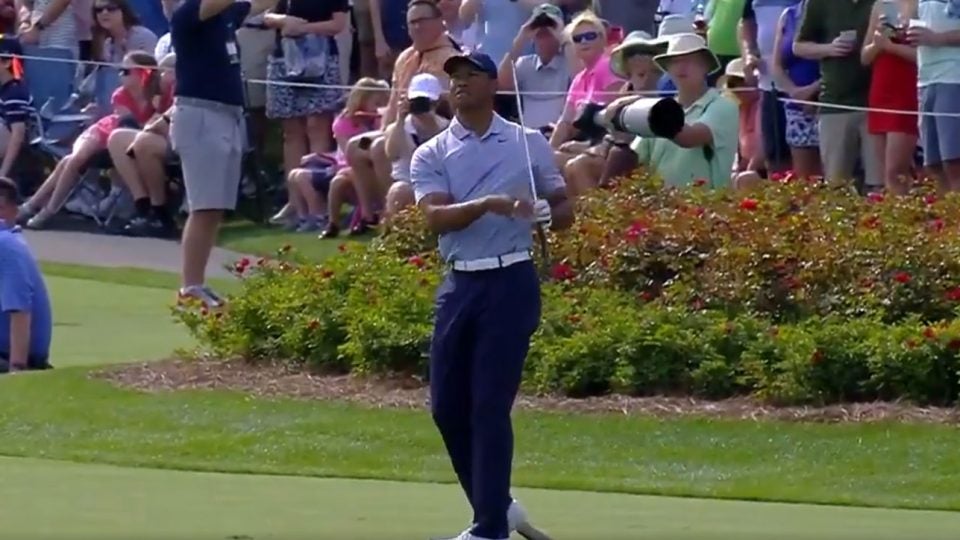 Tiger Woods a second shot into the water at the par-3 17th hole at TPC Sawgrass on Friday.
@PGATOUR on Twitter

Tiger Woods’ second round at the Players Championship was off to a perfect start through his first seven holes. But Tiger’s day was completely derailed at the iconic island-green 17th hole, where he hit two shots in the water and plummeted down the leaderboard.

Woods opened his round on Friday with two easy pars, and then got things going with back-to-back birdies at holes 12 and 13 (his fourth and fifth holes of the day). Another birdie followed at the par-5 16th, where Tiger just missed a chip-in for eagle.

Then disaster struck where it so often does at TPC Sawgrass: the par-3 17th.

With the hole playing 146 yards for Round 2, Tiger sent his tee shot soaring onto the green and watched helplessly as it bounced a few times before trickling into the water.

He then chose to hit his third shot from the drop area to the left of tee box, just 90 yards away from the hole. Despite the shorter length, the pond was still in the way, and Tiger sent his third shot long and splashing into the water once again.

He had no choice but to hit it from the same spot again, this time sitting 4. The ensuing shot finally found the green. After a two-putt, Woods walked briskly off the green with a devastating quadruple-bogey 7.

Tiger’s 7 at 17 wasn’t troubling just because it was six shots more than Ryan Moore made on the hole yesterday. The unfortunate double water-ball dropped Woods from five under and a tie for 8th, all the way down to one under and T54. One under also represents the projected cut line, so Tiger will need to get his act together on his second nine to stick around for the weekend.