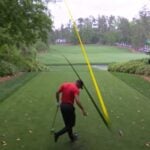 Tiger Woods' tee shot on the 13th hole in the final round of the 2019 Masters.

AUGUSTA, Ga. — Tiger used to say this a lot: “To win, you gotta get a little lucky.”

You could say the luckiest thing that happened to Tiger, on Masters Sunday three years ago, was that the play was in threesomes, which got him in the last group. He watched as the 54-hole leader, Francesco Molinari, hit his tee shot on 12, and his third shot on 15, into the water. Molinari was trying to win his first green jacket. Woods was trying to win his fifth. Which of course he did.

But the luckiest piece of good fortune for Woods that day, in my humble opinion, happened on the tee at 13, the most exquisite par-5 in golf. I have wanted to ask Woods about that tee shot for three years now. (You know, time and place, time and place.) On Tuesday, I got the chance.

Join me as we turn back the hands of time to that incredible day, months before anybody was talking about Covid-19. Woods’ mother and son and daughter flew up from South Florida that Sunday, on the chance they might see Tiger win his first major since the 2008 U.S. Open at Torrey Pines. Because afternoon rain was in the forecast, the Sunday tee times were moved up, play was off two tees and the groups went out in threesomes.

When Woods made a superb, safety-first two-putt par on 12, heavy raindrops were just starting to fall. I was standing there, and you could see the plops in still Rae’s Creek. Woods and Molinari and their third, Tony Finau, headed to the privacy of the 13th tee. Woods had the honor.

Woods was wearing, as he often did in that period, black Nike golf shoes with round spikes — no old-timey nails — about the size of a quarter. With a driver, he swung as hard as you will ever see Woods swing, which is plenty hard.

With his ball in the air he said, “Ahhh, I f—ing slipped.” If you like sports — if you liked watching Ali or Jordan or Jeter or anybody at the height of their powers — you had to love the intensity of the moment. Tiger took the blue gum in his mouth with his right hand and threw it into an azalea.

You can see all this plain-as-day on the CBS feed. The Masters website had then and has a feature called “Every Shot, Every Hole.” I watched the shot more than once. His ball — after slipping — finished in the middle of the fairway, 160 yards from the hole. From there: 8-iron, two putts, birdie. The game was completely on.

But how did that ball wind up where it did? I asked Tiger if he was ever able to see what his ball did.

“No, I didn’t,” Woods said. “Jeff [Knox] sets it up every year, and he moves that tee over maybe another step. There’s nowhere else to go. So everyone who has played there has teed off virtually from the same spot. It’s like digging into a batter’s box. And it’s sandy there. There’s really very little light that gets back in that area.

“So the grass is never as pristine as it is anywhere else on the golf course, and we’re all hitting from the same spot. It’s not uncommon to see guys slip there, and I did. I slipped, and I hit it off the toe and hit a toe draw right around the corner.”

Now that is a spectacular and detailed answer. Woods even used a baseball analogy, as he likes to do.

I slipped, and hit a toe draw right around the corner.

Once, for an interview he gave to Augusta National about how to play Amen Corner, Woods said of 13, “Man, it’s a good par-5, but it’s the length of a par-4, in the modern game. It just happens to turn a little bit too much, I think, for a par-4. From the tee, you hit 3-wood or driver to the corner or around the corner. I’ve seen guys just pull out driver, tee it up a little higher and bomb it over the treetops. It can be done but it’s a risky tee shot. Once you have that ball in position, you’re presented with a hanging lie. It feels like I’m in Little League, hitting some high inside fastball that I have to turn on.”

I love his use of the present tense in that description, just as he used present tense (for the most part) as he described his tee shot in 13 on Sunday in 2019 when I asked him about it. It’s as if he is reliving it.

Finau was standing about four yards from Woods when he played that tee shot on 13 three years ago. He was slightly right of the right tee marker. He had a perfect view of it. He told me, while we sat in a quiet dining room at Liberty National about five months after it, that Woods hit a toe hook that started left and went over the tall trees that are left of the fairway. How that shot ended up in the 13th fairway was a mystery to Finau.

I have watched the tape, shared it with friends, interviewed the CBS camera operator who filmed it. How did a toe-hook tee shot that started left suddenly curve right and finish in the fairway?

The camera operator, Paul Padelsky, reached the same conclusion that I did: Woods’ ball likely ticked a branch and that ticking somehow changed its flight pattern. Padelsky noted the abrupt swivel he had to make with his camera to keep the ball in his viewfinder.

The repetition here is for emphasis:

I hit it off the toe and hit a toe draw right around the corner.

As they say in baseball, hitter knows.

To me, the mystery is only deeper now.

This year, Woods is playing with actual spikes in his golf shoes.