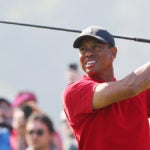 Thomas and the persimmon finally met.

As a birthday present, Woods brought out the wooden club for a round with Thomas, Rickie Fowler and Bud Cauley. One provision. It had to be used on all 14 the drivable holes.

“It’s fun to see those guys try and hit something that small. They’re young enough where they really didn’t have an opportunity to play it,” Woods said on GolfTV this week of Thomas; Fowler, 31; and Cauley, 30.

There apparently was some love at first strike. Four days later, Thomas and Fowler found their own persimmons, along with older balata balls, for a round at Medalist Golf Club in Florida, site of Woods’ charity event with Phil Mickelson, Tom Brady and Peyton Manning next weekend. The feel of the club was one thing. The sound was another. “The audio on some of the shots today were niiiiiice,” Thomas wrote on Instagram.

His last high school round was in 1994. His first victory, in 1996, saw persimmon from the player he defeated in the playoff at the Las Vegas Invitational, Davis Love III. Woods, along with pretty much everyone else in golf, eventually exchanged their wooden woods for metal woods.

During the Thomas birthday round, he told GolfTV, the old Cleveland went about as far as his current 3-wood.

Distance wasn’t the only difference.

“That was fun to see those guys try and figure it out.”