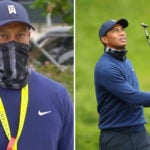 There’s a reason that companies pay good money for Tiger Woods to sport their logo. Any golf fan could close his or her eyes and picture the outfit: “TW” on his hat. “Monster” on his black-and-neon golf bag. Nike swooshes everywhere else.

And now — an SA Fishing mask?

At first, Clarke Bowman couldn’t believe his eyes. The brand manager thought he recognized one of his company’s star-spangled Face Shields (they’ve trademarked ’em!) around the neck of the world’s most famous golfer.

“We’ve seen our products worn by some football players and basketball players before, but this is definitely the biggest ‘celebrity’ we’ve ever had,” Bowman said. “It definitely was a ‘holy cow’ moment. Of, ‘Oh my God, Tiger Woods is wearing our face shield!'”

His only remaining concern was that it was too good to be true.

Bowman was the first at his company to spot the shield.  He sent it over to the marketing team, checked different photos, double-checked the design. The key was the etched look and feel — SA has the only blacked-out American flag design on the market with that particular treatment. Confirmed!

The thing is, Woods wasn’t just wearing it to satisfy the PGA Tour’s basic bubble requirements of face coverings. He was rocking it. Walking in from the parking lot. Warming up on the range. Practice rounds, too. When he teed off on Thursday, the mask, or neck-warmer, or gaiter, or Face Shield, or whatever you’d want to call it — it stayed on.

(Sidenote — if you’re just looking to buy one, check ’em out here!)

Woods’ preferred mask thus far appears to be “Blackout American Flag.” It’s not immediately clear whether he went for the full variety pack in the buy-1-get-4-free deal.

Has the company seen an uptick in sales since Woods started sporting them on national television? Bowman played it cool, saying it was too early to tell — but acknowledged that they were optimistic about the extra exposure.

Plenty of companies have pivoted to making face coverings in recent months, but SA has been making these for more than five years. Here’s how Bowman described them:

“They are a tubular bandana made of microfiber material and are lightweight and breathable. They are mainly worn by outdoorsmen like hunters and fisherman as they provide excellent sun protection, but also help to stay warm in the cold, they help to keep your skin cooler in the hot sun, and they can also help to protect against bugs and dust, so traditional blue-collar workers like construction workers and landscapers also love to wear them while on the job.”

A blue collar is exactly what Woods might have been wearing on Thursday — but there was no way to tell beneath his covering.

To be clear, the company had no real connection to Woods before this. They’d heard, like the rest of us, that Woods is an avid fisherman, but that was the extent of the connection. No sponsorship. No ad deal. As best we can tell, Woods bought them on his own. He could afford them.

From Bowman’s perspective, the unpaid endorsement is worth extra. “It really shows to us and potential customers that our product is the real deal and works great for its intended use,” he said. “I’m sure Tiger has the ability to wear whatever he would like in the world, and also has to follow apparel contracts that I’m sure he has — and yet he chose to wear an SA Face Shield. Words can’t describe how awesome of a feeling that is for our brand.”

As a point of reference, in 2018 Forbes ranked Tiger Woods as the world’s 16th highest-paid athlete at $43.3 million, with $42 million coming from endorsements.

SA Company is a self-described small business based out of Boca Raton, Fla., that dates back to 2013. As the coronavirus spread intensified in March, they were eager to use their supply to help — so SA donated 15,000 to frontline workers including police officers, firefighters, medical workers, staffers at assisted living facilities and more.

After the initial donations went off successfully, SA set up a giveaway for the general public in their local community. “We set up a drive-thru at our HQ and gave around 10,000 away to the public completely for free,” Bowman said. A video highlighting the efforts has received nearly 2 million views on YouTube. Plans for another giveaway are in the works.

SA insists that by cutting out the middle man and selling direct to consumer, they can keep costs low while maintaining quality.

“Our Face Shields are buy 1, get 4 free for $20,” he said. Competitors, he pointed out, might cost more than that for a single gaiter.

You can snag an SA Face Shield (or five!) here.