10 things we learned from Tiger, Koepka, D.J. and Harold Varner’s star-studded practice round

JERSEY CITY, N.J. — On Tuesday afternoon at Liberty National, Tiger Woods and Harold Varner III were slated to play a practice round. Brooks Koepka and Dustin Johnson, who share a coach, also planned to play together. A weather delay stunted tee times, and the four arrived at the first tee together for what was suddenly a high-powered practice-round foursome. The first-, second-, fifth- and 185th-ranked players in the world played nine holes, most of them in order. To answer your two most pressing questions, Woods looked healthy but wasn’t terribly sharp. Because it’s a Tuesday, only the first part of that really matters. But here were 10 other observations — insights, if you’re feeling generous — about their time on the course.

The group inside the ropes with Tuesday’s fearsome foursome ran right around 20 deep — and that didn’t even include media. There were no fans allowed on property Tuesday, which meant the group strolling the fairways dwarfed the number of stray onlookers. There was nary a wife or girlfriend in sight, but between caddies, coaches, managers, agents and others, these guys roll deep. And the Masters this ain’t. 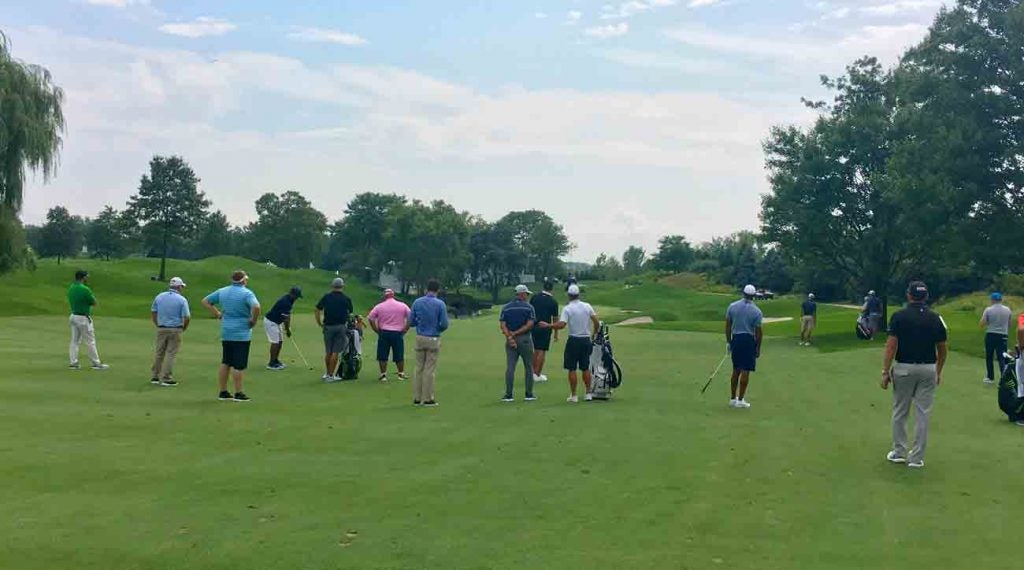 ESPN’s Michael Collins lobbed a football question in Tiger’s direction coming off the first green, asking if Woods’ Oakland Raiders would make the playoffs. “Well, we’re guaranteed to be in the top four in our division,” Woods deadpanned.

Remember the kid in school who would finish the problem annoyingly fast, then look around bored while everyone else battled their way through it? That’s Brooks Koepka in a practice round. Over and over, Koepka was the first one to finish chipping and putting around the green, strolling off to the next hole, not a visible care in the world. He says he doesn’t particularly like to practice. That doesn’t appear to be a front. He also appears to practice an appropriate amount. 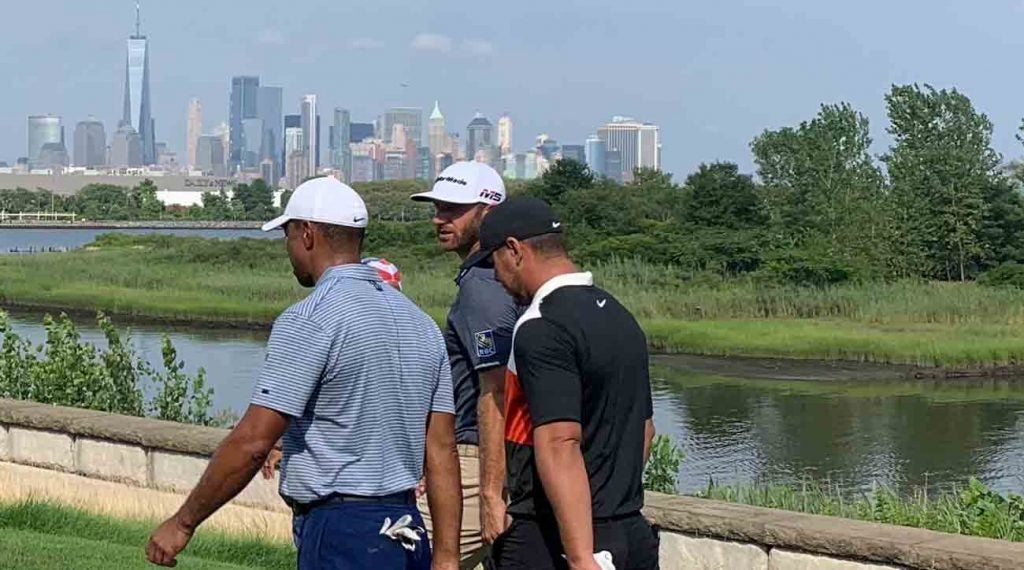 Never have I seen a practice round group hit so many shots in such a short period of time. Forget “ready golf” — this was far beyond that. Koepka’s impatience, Johnson’s indifference, Woods’ preparation, Varner’s enthusiasm — all combined for a rapid-fire style of play off the tee and on the approach. Guys were teeing it up alongside one another, grabbing second balls, launching practice shots, talking all the while. Golf has a slow play problem, but this group certainly didn’t. The Tour grabbed a video of the group’s three headliners teeing off one after the next after the next, and it looked like a bit. It wasn’t. That’s just how the pace of the day went.

Remember the 1st hole at the Presidents Cup two years ago? That’s No. 5 now, and it is wildly different. The hole is penal off the tee: water left, nastiness right, narrow further up. But it seemed wickedly hard at the Presidents Cup, where there were chanting fans and a set of bleachers that hid the wind direction and it was a player’s first swing of a match play round. It’s hardly easy — with today’s wind, the preferred shot was a 3-wood that started over the left water — but Varner and Woods striped it down the middle, back to back. In golf, details matter.

On that very 5th tee shot, Dustin Johnson pulled driver and mauled it down the left side, where it drifted on the wind back into play and landed on the edge of the fairway, a full scream past Woods’ and Varner’s drives (Koepka was wide right). The group fell momentarily quiet — the only time this happened all day — before Woods broke the silence.

“That’s just like your cut, Joey,” he said to his caddie, then cracked a grin as he strode off the tee.

As Johnson and Woods lofted bunker shot after bunker shot toward various pretend holes on the 6th green, Claude Harmon III recounted a moment from over the weekend where Austin Johnson, Dustin’s brother and caddie, was practicing his short game. He skulled the first chip, Harmon said. He clipped the second one so perfectly it rolled into the hole with dying speed. And then he laid the sod right over the third.

“That thing must have gone two feet,” Dustin said, cracking up. Austin played it cool. (These guys all play it cool.)

“Some guys got all the shots, boys,” he said with a shrug.

Koepka threw down a couple balls in a collection area to the left of the 7th green, short-sided to a front pin. He flopped the first ball short of his landing area, it caught the slope and rolled back toward him in the wrong direction. He hit another which caught the other side of the slope and released too hard, rolling past the pin. Johnson was watching.

“Nasty down there, huh?”

Tiger Woods doesn’t have a coach, but he sort of has a coach. Matt Killen, who more officially works with guys like Justin Thomas and J.B. Holmes, seems to spend a fair amount of time alongside Woods, checking in on his short game and increasingly his long game. He walked all nine holes Tuesday, chatting casually with Woods some of the time, consulting phone video footage with Woods other times. Killen doesn’t talk about his work with Woods, which is a smart business move. But he — along with manager/right-hand man Rob McNamara — are trusted ears and eyes. 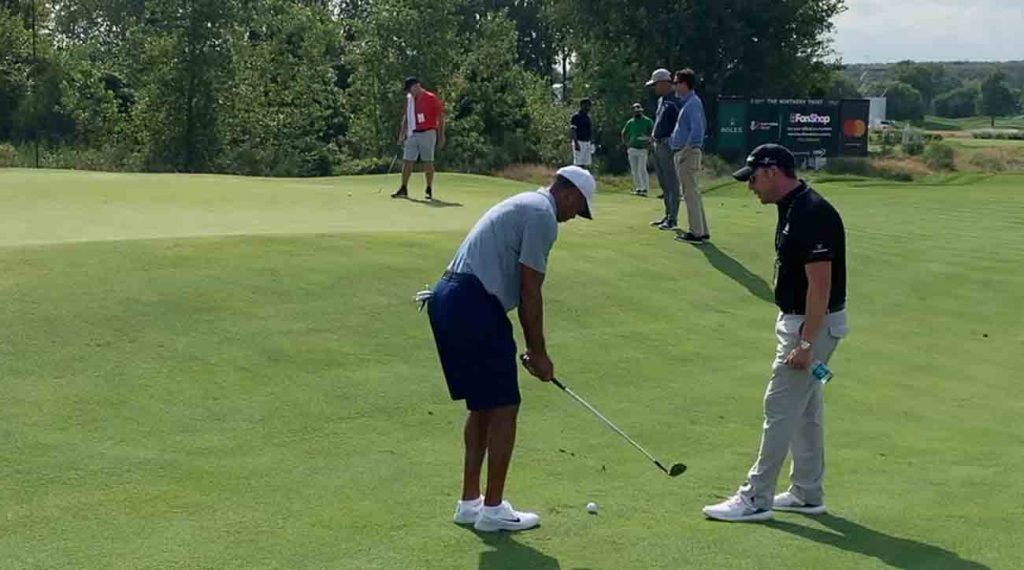 On 18, Woods flared his first tee shot into a bunker down the right. He re-teed before the first ball had hit the ground and pummeled one down the center with a baby fade, but pointed out to Varner that he “didn’t quite catch it.” Varner striped one down the center — but didn’t quite catch Woods. Johnson torpedoed a high cut past ‘em both. And Koepka dropped the hammer, swinging hardest and last and his flew the farthest but snuck into the left rough. If this was an official long drive competition, Johnson would have taken the crown. But this wasn’t an official anything. It was just a Tuesday.