After finishing off his opening round at the Northern Trust Open, it didn’t take long for Tiger Woods to get asked about his upcoming pay-per-view match with Phil Mickelson. Woods had remaining largely silent on the topic for weeks before teasing the event on Twitter Wednesday night. Thursday, he entertained several questions about the match and talked about how this would be a fresh opportunity for golf.

He was also queried about the pay-per-view aspect of the contest and argued it wouldn’t be prohibitively expensive.

“You know, how many times have we all purchased fights, whether it’s MMA or it’s boxing, whatever it may be? We all purchase those fights.” 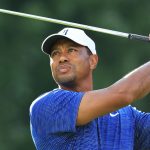 Woods compared the novel nature of the showdown — which is expected to include mid-round prop bets — to his battle against David Duval under the lights at Sherwood Country Club. “We never had golf under the lights before. That was a first,” he said.

As for the banner photo posted to Twitter showing Woods holding a left-handed driver? Woods confirmed that he will not be taking on Lefty while playing lefty. “That was a mistake in the advertising,” Woods said, though he pointed out he’s got some lefty skills on course nonetheless. “I can hit tee shots left-handed. That’s not a problem. I would have a hard time getting the ball in the air left-handed but hitting a tee shot, I don’t have a problem with that.”

But his real delivery came at his presser’s final question. When asked if he had any smack-talk to add to Wednesday’s Twitter back-and-forth, Woods made it clear: he knows he’s the favorite. “I think I’m minus 180 right now. That’s all I’ve got to say,” he finished.