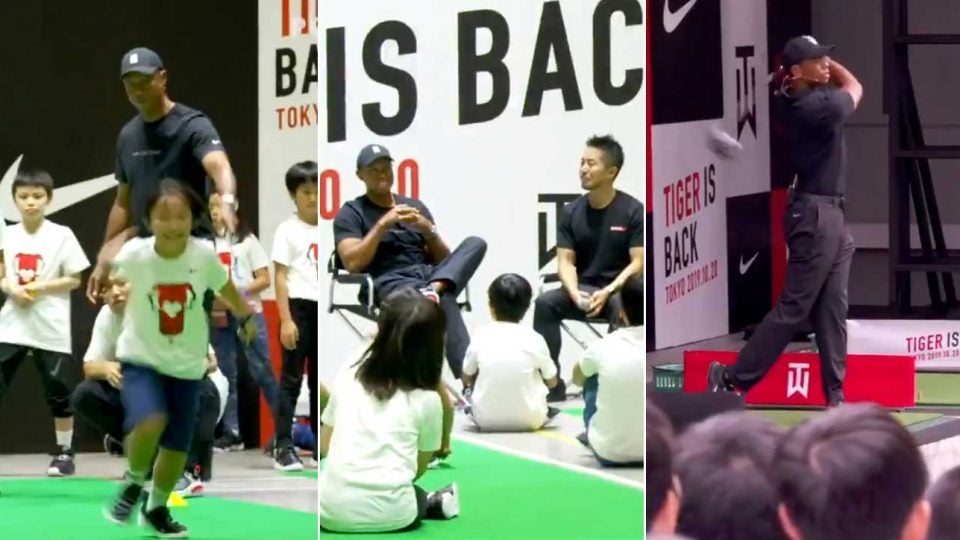 Tiger Woods participates in an exhibition for school children in Japan ahead of the Zozo Championship.
@PGATour on Twitter

Tiger Woods is in Japan this week for the inaugural Zozo Championship, and while he was there he spent time with some Japanese school children, playing gym games, hitting balls… and making fun of his own game.

Hundreds of children, young golfers and their parents gathered at a local Japanese school ahead of the Zozo for an event they won’t soon forget. The kids gave Woods a warm welcome when he arrived at the auditorium decked out with posters featuring Tiger’s mug and the message, “TIGER IS BACK, TOKYO 2019/10/20.”

Tournaments
Will Tiger Woods pick himself for the U.S. Presidents Cup team? He isn’t saying no

In a video released by the PGA Tour, Woods begins by playing gym games with the adoring children. He showed he’s still a kid at heart running around the gym and laughing with the kids as he played a gym ball relay game with a giant golf club, and participated in rocks-paper-scissors-shoot, among other activities.

After all that action, which Tiger appeared to genuinely enjoy, he sat down and fielded questions directly from the kids, which featured a few hilarious moments. First, Tiger was asked what he would be doing if he wasn’t a pro golfer.

“I think if I didn’t play professional sports I would be in the military,” Tiger answered.

Then the young questioner followed up with, “What’s the military?” cracking up Tiger and setting off laughter throughout the room.

A smiling Tiger responded, “That’s a good question,” inviting more laughter, before answering, “They protect us.”

Soon after, another child begins asking a question in Japanese that makes Tiger laugh before she’s finished. His response revealed that the subject question was about his famous cartoon-Tiger headcover Frank (all of the kids at the exhibition donned Nike Frank tee-shirts).

“Frank is not my real pet,” Tiger said laughing. “It’s a headcover my mom gave me to wish me good luck in every tournament I play in.”

The next part of the event was an exhibition, which Tiger decided to start by hitting driver. After smacking a few shots, each of which inspired ooos and ahhhhs from the crowd, the funniest moment of the day occurred.

As Tiger bent over to tee up another ball, the adult moderator asked, “Is there any tip in controlling your driver?”

Tiger, who has famously struggled with driving accuracy throughout his career, responded with a fantastic self-own, “I’m still working on that.”

You can watch the full video below.

He spent the day playing games with kids and giving lessons to young golfers before @ZOZOChamp.

They laughed with him.
They learned from him.
They cried for him. ❤️#LiveUnderPar pic.twitter.com/KAJiPZRpwo