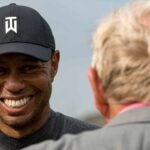 Tiger Woods and Jack Nicklaus have shared plenty of meaningful moments over the years.

Welcome back to the Monday Finish, where we’re not saying anything bad about Jordan Spieth’s pre-shot routine until next Easter, at least. Let’s get to it!

Scottie Scheffler got his new green coat more than a week ago, but stories are still trickling in from all corners of this year’s Masters. That includes an intriguing appearance from Jack Nicklaus on SiriusXM PGA Tour Radio’s Inside the Ropes last week, where he talked about the Champions Dinner and what he learned sitting next to Tiger Woods — though he acknowledged none of us can understand what Woods’ experience post-accident has been like.

“I couldn’t possibly give you any idea what he went through the last 14 months. I think only Tiger could do that,” Nicklaus said. “I’m sure that what he went through was very difficult. Tiger’s a very driven young man with a great work ethic and he’s got a great desire to do the best he can. That’s Tiger. It’s always been Tiger.”

The best nugget there is Nicklaus referring to Woods as a “young man.” The Tiger discourse these days is so focused on the effects of age, life and time — about his health and how he’s walking — this is more encouraging framing. He’s just 46 years old, after all! Nicklaus, who sits next to Woods every year at the Champions Dinner, also shed some light on Woods’ decision-making process heading into this year’s tournament.

“He said, ‘Well, why in the world would I wait a year to play if I know I’m gonna hurt both years? Why don’t I just get back and start playing and just suck it up?’

“Which is basically what he did. I thought his performance was quite good. I mean, I think he wore out on Saturday and Sunday, but I think it was great to have him back in the game.”

In other words, Woods knew he was going to hurt. He did hurt. And he knows that next time, whether at the PGA Championship or the U.S. Open or the J.P. McManus Pro-Am, he’ll likely hurt, too. He seems mentally prepared to deal with the consequences.

Jordan Spieth won on Easter Sunday for the second consecutive year. His RBC Heritage victory came with a tartan jacket and $1.44 million. Spieth’s win snuck up on us in a whole bunch of ways: He’d missed the cut at last week’s Masters, for one thing, and seemed to play his way in and out of contention a half-dozen times over the weekend. But on Sunday he birdied 18 and then watched his competitors crumble, one by one, until he was the only man left standing.

Hyo Joo Kim of South Korea won the LPGA Tour’s LOTTE Championship by two strokes over Hinako Shibuno. The victory was her fifth on Tour and elevated her to No. 6 in the world. Kim bogeyed No. 17 to cut her lead to just a single shot — but then slammed the door with a neat up-and-down for birdie at No. 18.

“I’m proud of that shot,” she said of her winning pitch. “Maybe I made a lot of people, like, sit on the edge of their chairs, so I felt great about it.”

It’s tough to remember a week in which so many pros will leave a PGA Tour event feeling like they should have won. Some even have reasonable cases! Seven golfers finished one shot out of the playoff, after all. Let’s buzz through ’em.

Patrick Cantlay made it to the playoff against Spieth but with his opponent in the bunker chose to go for the kill, misjudged the wind and left himself plugged near the lip of that same front bunker. It was an unfortunate miss that soured the ending of what had been another impressive week for the World No. 4, who has now finished fourth or better in six of his last 11 starts.

Harold Varner III may still be fuming about a strange situation that happened Friday involving a neighbor in slippers and an out-of-bounds line. The miss ended up costing him two strokes, which felt especially meaningful when he finished Sunday at 12 under par while Spieth was at 13.

Shane Lowry was in the solo lead and scrambling for pars left and right before his chip shot at the par-3 14th rolled past the hole and into the water beyond, leading to double bogey. He had a birdie try from eight feet at No. 17 but missed that, too, dooming him to T3.

Sepp Straka rallied to a share of the lead with a birdie at 17 but then missed the green at 18 and made bogey to join the group at 12 under. And Cameron Young missed a six-footer for par at 17 and finished at 12 under, too.

There were three others who finished at 12 under who were far happier to be there. Cameron Davis shot 63, the round of the day, to rally to T3. J.T. Poston had the next-best score with a 64 that included a birdie at No. 18. And Matt Kuchar finished his day in style with birdie at 18, too, securing his second consecutive top-three finish. Not all thirds are created equal.

There was a notable crop of pros who missed the cut at the RBC. Dustin Johnson, who’d contended at the Masters but has had an uneven season. Cameron Smith, who entered as the second-hottest golfer in the world. Matthew Fitzpatrick, who’s in the midst of a terrific season. Rickie Fowler, who hasn’t finished better than T40 in his last 10 starts. Harbour Town is a very specific test of skills, and I think we can dismiss most missed cuts here as one-offs. But interesting to see the MC list nonetheless.

One contributing factor to Jordan Spieth‘s victory was his aggression off the tee. Harbour Town is known to neutralize distance as much as any course on Tour, which is why you often see a mix of shorter hitters in contention. And while Spieth is probably a longer hitter than he gets credit for — he finished last season 66th on Tour in driving distance — he’s hardly a Bryson-style bomber. But he played aggressively at the RBC and finished second in the field in driving distance (where all drives were measured). That suggests he was pushing it up the fairway and feeling confident hitting the ball where he was looking. That contributed to him finishing fourth in the field in Strokes Gained: Off the Tee and first in Strokes Gained: Tee to Green.

“I would say tee to green, if you take my last three events, it’s as good as it’s ever been,” Spieth said.

He explained why he likes the feel of this course, too.

Spieth appreciates a cool punch shot as much as anyone. Maybe that’s why he could play so aggressively off the tee.

After Jordan missed a tap-in on the 18th hole on Saturday, he winced. He figured it might end up costing him big-time.

“I mentioned it to Michael [Greller, his caddie] and to Annie afterwards. Riding into the clubhouse to sign my card, I said I knew that 18 was going to cost me, and I hoped it did, in a way because, if it didn’t, it meant I just played a very average round [Sunday]. So I hoped I worked my way into contention in spite.”

Spieth said he was as upset post-round as he had ever been during a tournament.

“There’s just no excuse for those kind of brain farts as a professional to myself, but also to Michael, who’s working his butt off, to go out there and do that that could potentially affect the outcome of a tournament. And I’ve done that a number of times on this stretch in the last four weeks.”

“She never comments on my golf,” Jordan said by way of introduction. But she offered some counsel here:

“You need to take five seconds, if you miss a putt, before you hit your tap-in.”

Spieth said the message stuck with him all Sunday.

“There was a couple times I was just going to rake it, and I was like, ‘No, I’ve got to take five seconds.’ I’m just glad it didn’t end up affecting it all, to be honest. Just made it a little more exciting at the end.”

It’s unlikely Spieth was going to miss his seven-inch winning putt no matter how long he took to line it up. But it was reassuring to watch it hit the bottom of the cup nonetheless.

3 things to watch this week.

With Peyton Manning! This was a fun interview that you can hear in podcast form or on YouTube below:

Hancock Park, technically. But the DIO Implant L.A. Open brings the LPGA back to a star-studded city this week at Wilshire Country Club. Brooke Henderson is your defending champ.

The Zurich Classic has never quite lived up to its potential, but this may be the best year yet in terms of team talent. Patrick Cantlay is teaming up with Xander Schauffele. Viktor Hovland is teaming up with Collin Morikawa. And Marc Leishman is teaming up with Cameron Smith. Those three go off as tournament favorites, with others including the Masters champ (Scheffler has teamed up with Ryan Palmer) not far behind.