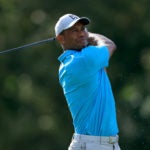 Woods put his tee in the ground, placed his ball on top of it and striped his tee shot 327 yards down the right side of the fairway. He hit his approach to within 10 feet. He rolled in the putt. Birdie. Woods hadn’t played since mid-February due to ailment and the PGA Tour’s three-month hiatus due to the coronavirus. At his last tournament, the Genesis Invitational, Woods had finished last among the players who made the cut. He was back, and he was back.

Woods added a birdie at 3. Two-under through three. He was 1-over from there and finished with a 1-under 71, five shots behind leader Tony Finau.

“Got off to almost an ideal start and got a feel for the round early,” Woods said. “I just didn’t make anything today. I had looks at birdies, but I really didn’t make much.”

In his four events since the Tour’s return, he had tied for 23rd, tied for 33rd, missed the cut and tied for 53rd. On Thursday, the world’s 13th-ranked player made nine birdies, including four of his last five holes, on his way to a 6-under 66 and a one-shot lead. Ryan Palmer was in second after a 67, and Gary Woodland and Brendan Steele were tied for third after 68s.

“I think this is a big step, just getting off to a better start than I have in most tournaments,” Finau said. “I’ve actually played some pretty solid golf through my first few events, just haven’t really put it all together for a whole tournament, and hopefully I can change that this week. Off to a great start already, and we’ve got three more rounds to go.”

Among the group at 3-under was world No. 2 Jon Rahm, and world No. 1 Rory McIlroy, defending champion Patrick Cantlay and Jordan Spieth were at 2-under.

Last week at the Workday, the winning score was 19-under. On Thursday, only 24 players broke par.

Among the players over par, Bryson DeChambeau shot a 1-over 73; last week’s runner-up, Justin Thomas, fired a 2-over 74; last week’s champion, Collin Morikawa, had a 4-over 76; Dustin Johnson shot an 8-over 80; and Rickie Fowler fired a 9-over 81.