Tiger Woods’s first competitive round of 2019 is in the books.

Woods opened with a two-under 70 in the first round of the Farmers Insurance Open at Torrey Pines on Thursday. Playing on the South course and in his first PGA Tour event since his Tour Championship victory, Woods finished with five birdies and three bogeys. He’s eight shots back of first-round leader Jon Rahm, who was among the players who went low on the North course.

“I think I could have shot something around 68 or 67 today, pretty easily,” Woods said. “I hit a lot of good putts that were around the hole that just didn’t fall in. Overall, shooting a couple under par on the South course, not so bad.”

Woods’s first blemish of the day came at the par-4 2nd hole, where he sent his tee shot into the rough. He followed it up with a poor approach shot that landed in the greenside bunker, leading to a two-putt bogey.

He recovered and got himself back to even par when he birdied the par-5 6th hole. His second shot went into the greenside bunker, but he blasted out and made a 10-footer for birdie from the fringe.

Woods closed his front nine with a 15-foot birdie on the par-5 9th hole to make the turn in one-under 35.

Woods moved to two under for the first time all day when he birdied the par-3 11th, but he took a step back with a bogey on 12.

Woods birdied his third straight par 5 when he got to the 13th, draining a 30-footer to move back to two under.

The patrons had a feeling this one had chance.#LiveUnderPar pic.twitter.com/FK5lACfFnU

Woods bogeyed 16, but he made his final birdie of the day on 18 (he made birdie on all four par 5s). After hitting his tee shot into the rough, Woods put his second shot back onto the fairway and then hit his approach to 12 feet. And, just like he did in the final round of the 2008 U.S. Open, his most recent major title, Woods sunk the birdie putt.

Wood’s first round also included him putting with the flagstick in twice. The first time came at the 8th hole when he missed a long birdie putt. The second opportunity came at 14 on another long birdie putt that he also missed. Earlier this week, the 14-time major champion hinted at leaving the flagstick in for longer putts after having practiced it at home.

Woods tees off on the North Course at 12:30 p.m. on Friday alongside Xander Schauffele and Tony Finau.

The play-by-play of Woods’s entire first round is below.

6:47 p.m.: Tiger closes out his first round with a birdie putt to finish the day at 2-under 70. He’ll play on the North Course on Friday.

6:41 p.m.: Tiger’s approach shot gets a friendly bounce off the fringe and onto the green, setting him up with a birdie putt opportunity to close out the day.

6:38 p.m.: Tiger’s second shot gets him out of the rough and onto the fairway, giving him a solid approach shot opportunity.

6:30 p.m.: Tiger’s birdie putt curls just past the hole and has to settle for par. He heads to the 18th and final hole at 1-under.

6:27 p.m.: Tiger’s second shot from the fairway lands on the green and sets him up with another chance for birdie to move back to 2-under.

5:56 p.m.: Tiger’s chip shot rolls just past the edge of the cup and lips out, missing out on a great opportunity for birdie. He’ll have to settle for par at 15. He heads to 16 at 2-under.

5:53 p.m.: After putting his tee shot off to the right in the rough again, Tiger’s second shot lands just short of the green.

5:33 p.m.: Tiger’s shot from the rough gets him on the green, but he’s on the completely other side from the pin. Going to be another long putt for birdie.

5:22 p.m.: Tiger nails a beautiful long birdie putt across the green to move back to 2-under for the day. That’s the old Tiger we’re used to seeing. He now heads to the par-4 14th hole.

5:20 p.m.: Tiger’s approach shot hits the fringe and rolls back onto the green. Going to be a long birdie putt here for Tiger. More likely than not that Tiger pars 13 after hitting his third shot a tad longer than he wanted to.

4:53 p.m.: Tiger does his best Hosung Choi impersonation with his legs on his second shot from the rough at 12. After spraying his tee shot, his second shot gets him up near the green.

4:48 p.m.: So the rules snafu is a bit confusing but we’ll do our best to try and explain. It looked as if Tiger thought his ball moved as he was going to take his putt. No penalty for Tiger. Nevertheless, it was got interesting for a couple minutes.

4:31 p.m.: Tiger hits a perfect tee shot on the long downhill par-3 11th. He sets himself up for a great opportunity for birdie to potentially move to 2-under on the day.

4:06 p.m.: Second birdie of the day for Tiger at the 9th hole! He closes out the front nine at 1-under and five shots back of the lead.

3:52 p.m.: Worth noting on Tiger’s birdie putt on 8 — he left the pin in. I believe that’s the first time he’s done that. Took it out for his short par putt though.

3:50 p.m.: Tiger, with a fast putt down the hill, leaves it out to the left. He’ll tap in for par and he’s still even though eight.

3:49 p.m.: Finau chips in for birdie from off the green and he’s down to three under.

3:39 p.m.: Woods pulls out a wedge and comes up a little short. Looked a little fat coming out. About 4 feet left to clean up his par.

3:34 p.m.: Tiger’s approach on 7 finds the fringe and he’ll have another birdie try.

3:26 p.m.: Tiger on the 7th tee and he rips that one down the middle. Hardly watches it. Driver is working well today.

3:19 p.m.: From the bunker Tiger runs it past the pin as the green runs away from him. Lands just a few inches onto the fringe and he’ll have about 10 feet for birdie.

3:15 p.m.: A five-wood from 250 and Tiger finds the greenside bunker. Lots of green to work with though so we will see what kind of look he has.

3:10 p.m.: Woods find the fairway on the par-5 6th. With a chance to get there in two you gotta think he needs a birdie on this one.

2:59 p.m.: Your new leader is Jon Rahm, seven under at the turn. He’s on the North course. He also won here two years ago for his first career PGA Tour victory.

2:55 p.m.: And another missed birdie putt from Tiger. Still one over after 5.

2:37 p.m.: Good approach here for Tiger. We will call that about 13 feet coming up for birdie.

2:28 p.m.: Meanwhile, C.T. Pan leads at five under after nine. He’s on the North course. Bunch of guys at four under, including World No. 1 Justin Rose.

2:25 p.m.: Tiger leaves it out to the left side and it’s a par. Didn’t look like he pulled it; just didn’t read it right. One over after three.

2:09 p.m.: Xander makes his birdie put Finau, who was a little closer, misses and takes par. On to the 3rd.

2:05 p.m.: Tiger from the bunker to about 14 feet past the hole. Par putt is… not good. Good roll but just didn’t fall in from the right side. Bogey at the 2nd.

2:05 p.m.: And while Tiger is in the bunker, Xander and Tony both stick it inside 10 feet. Birdie tries coming for them.

2:03 p.m.: Not a great approach from Tiger. He’s going to be short-sided in the greenside bunker.

2:01 p.m.: Finau and Xander both find the fairway on 2. Short wedges coming up for them.

1:54 p.m.: Tiger lags it up close and taps in for par. Finau and Schauffele also par and we are on to the 2nd hole.

1:49 p.m.: Woods is playing alongside Xander Schauffele and Tony Finau. One would assume that’s the most-followed group of the day. And they would assume right.

1:44 p.m.: Annnnnnnnd we are off! Tiger, who usually struggles to hit this fairway, slams it right down the middle. His 2019 season is officially underway. 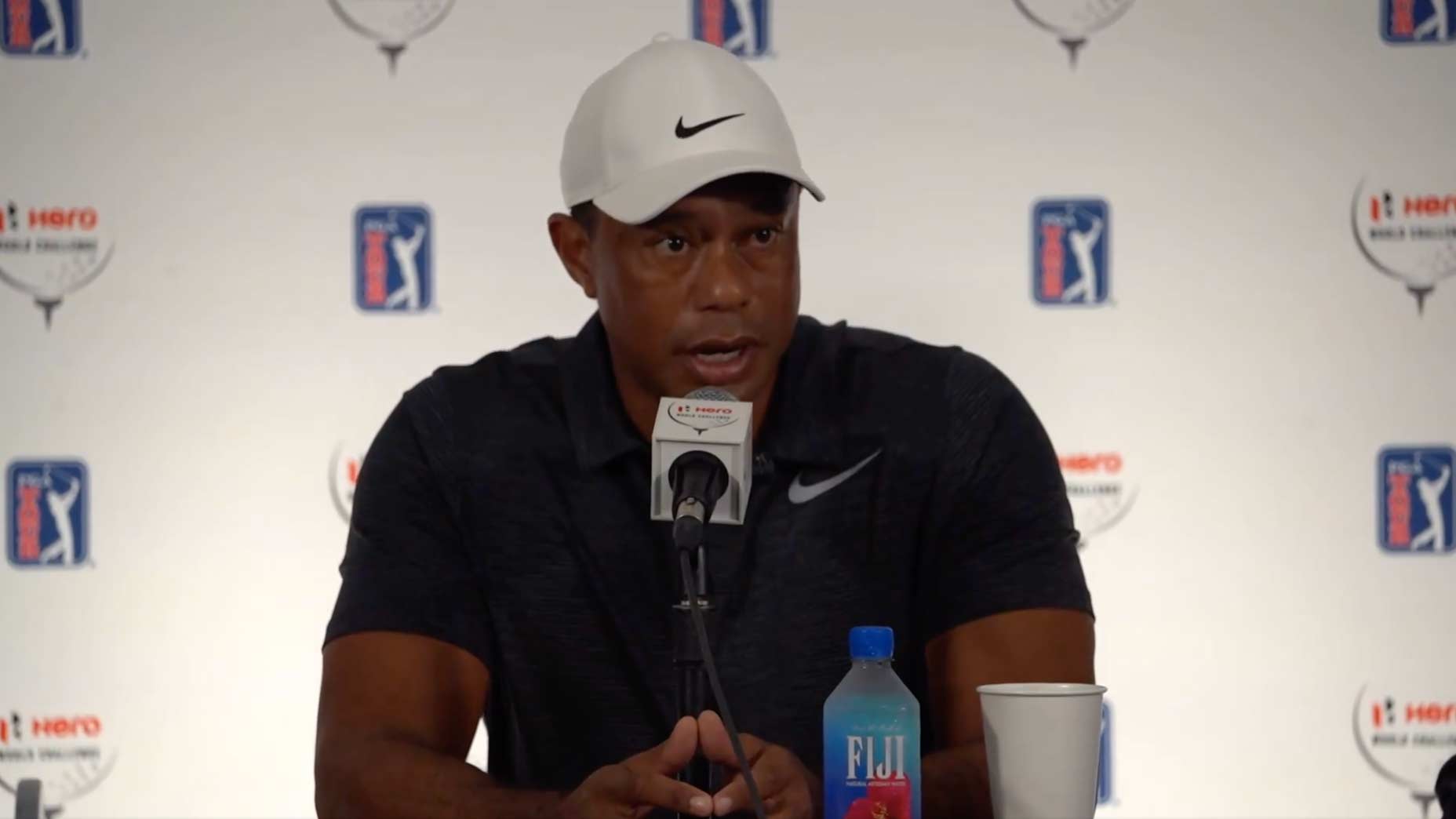 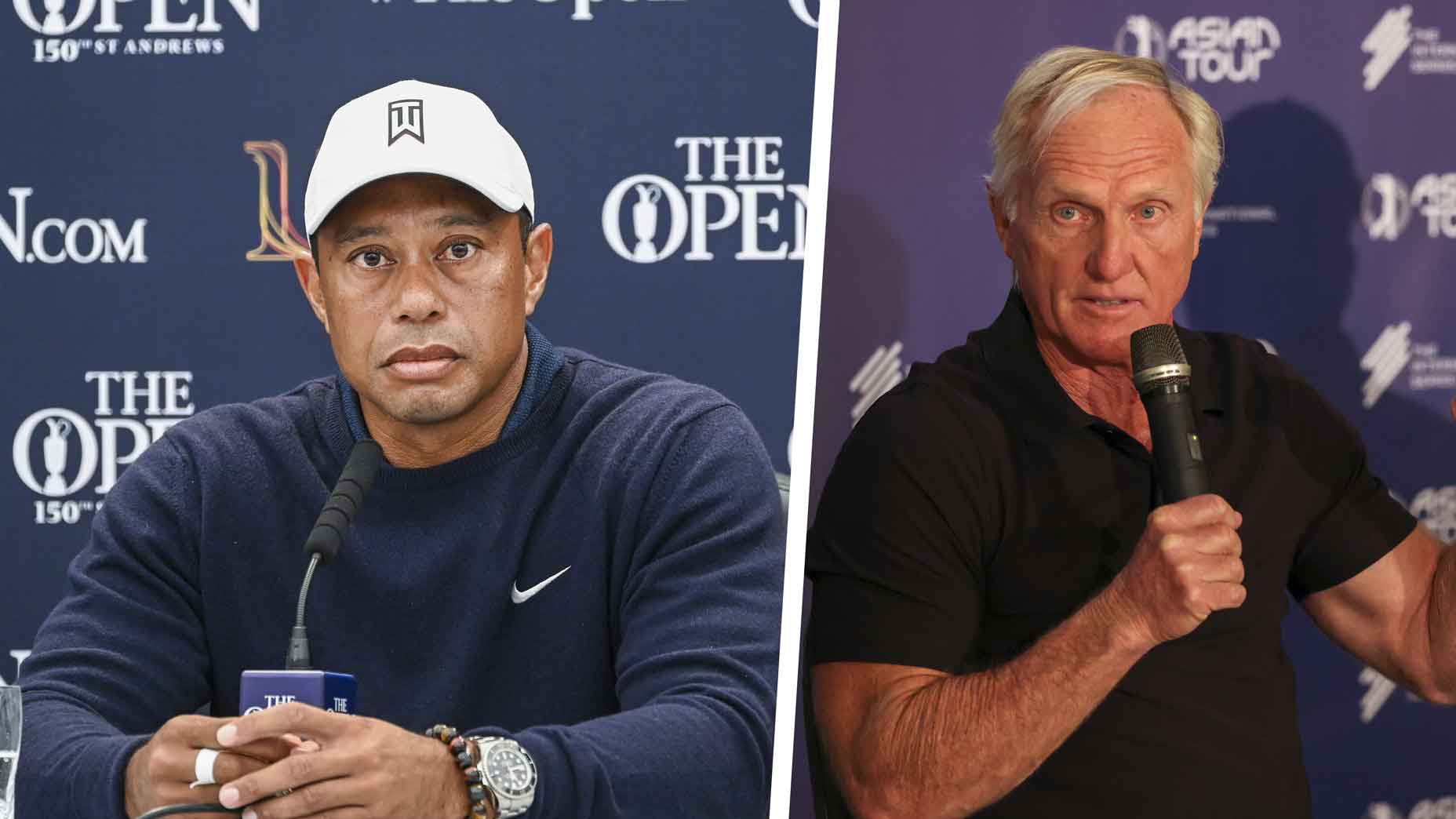 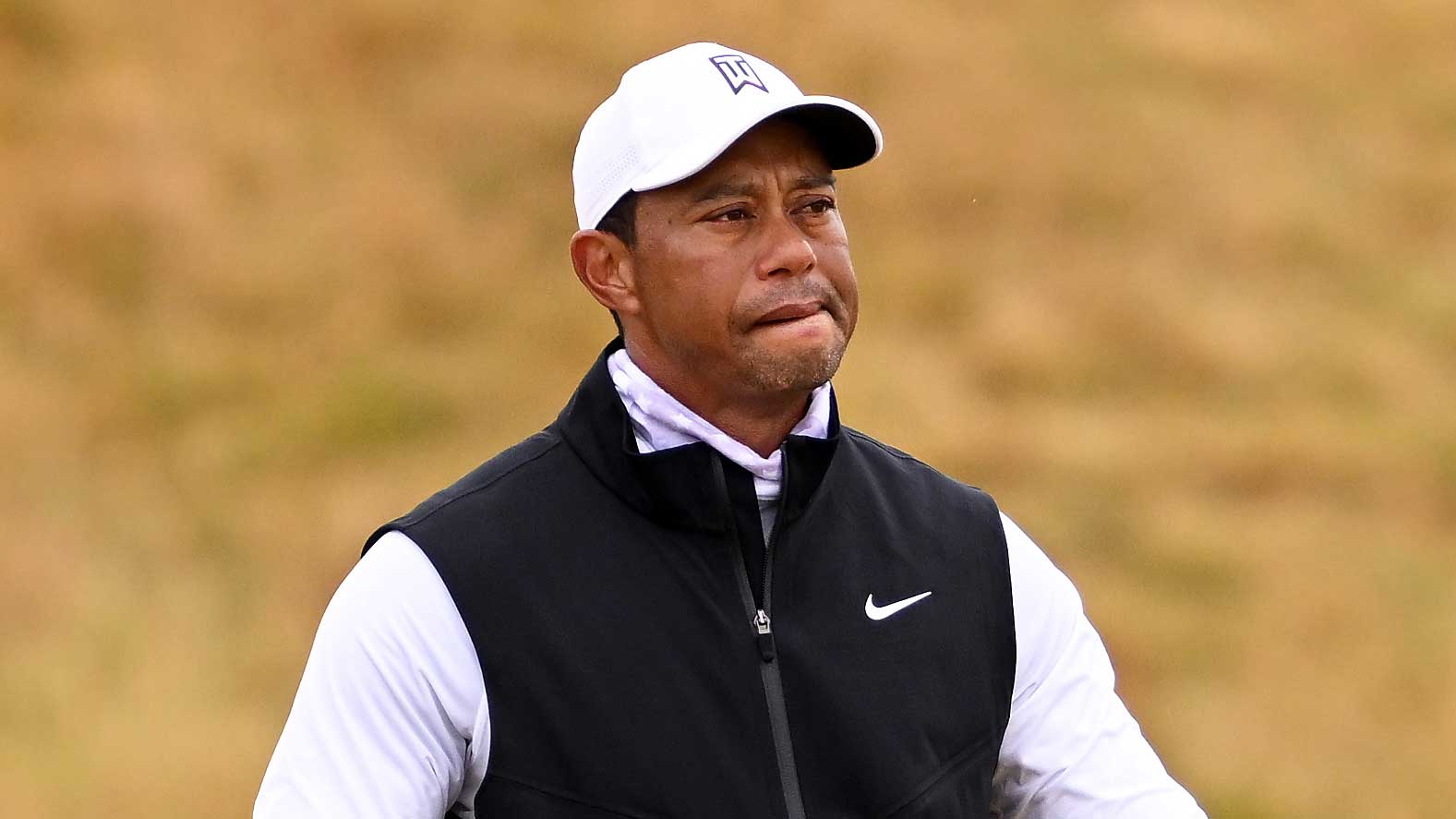 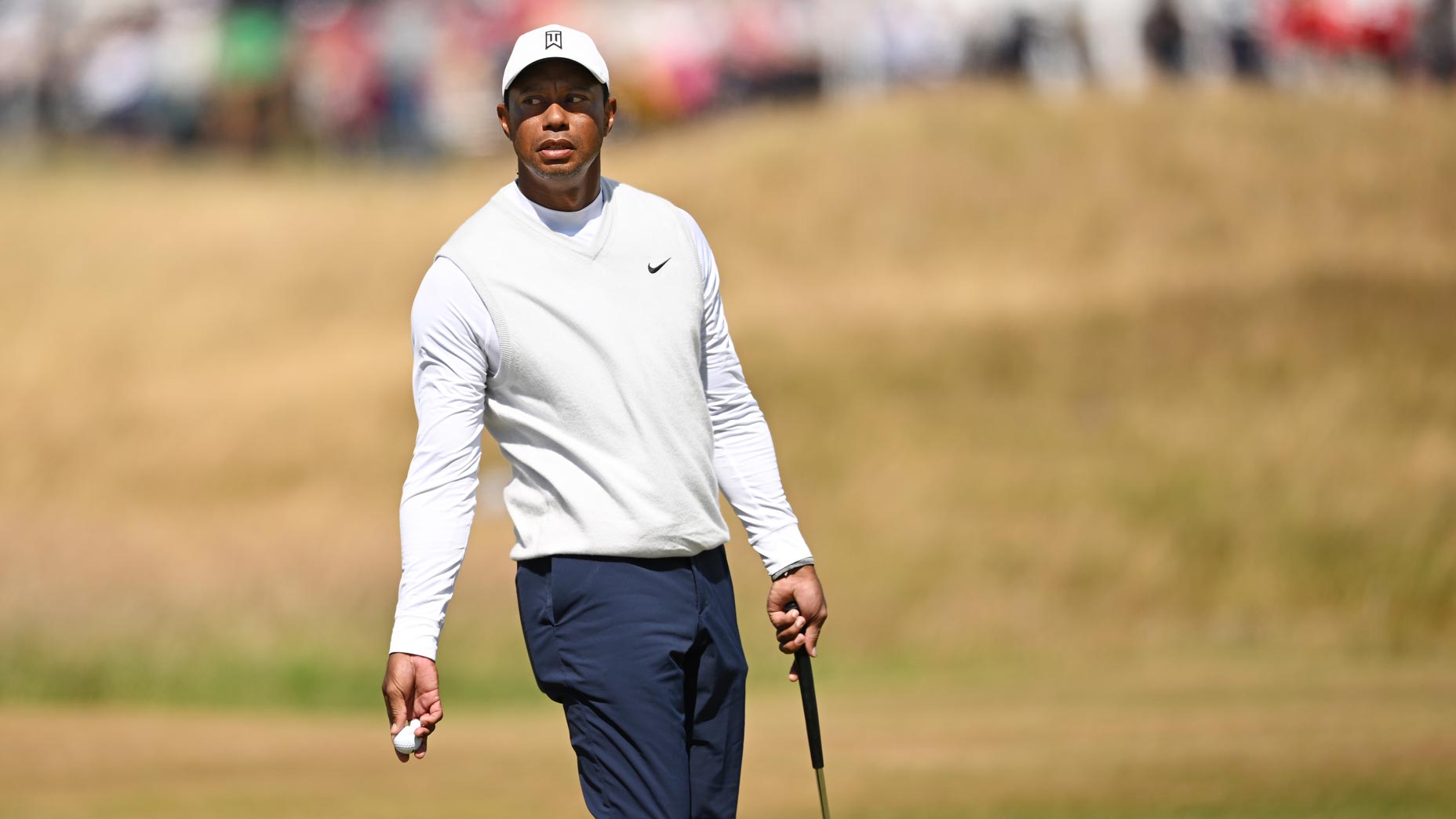