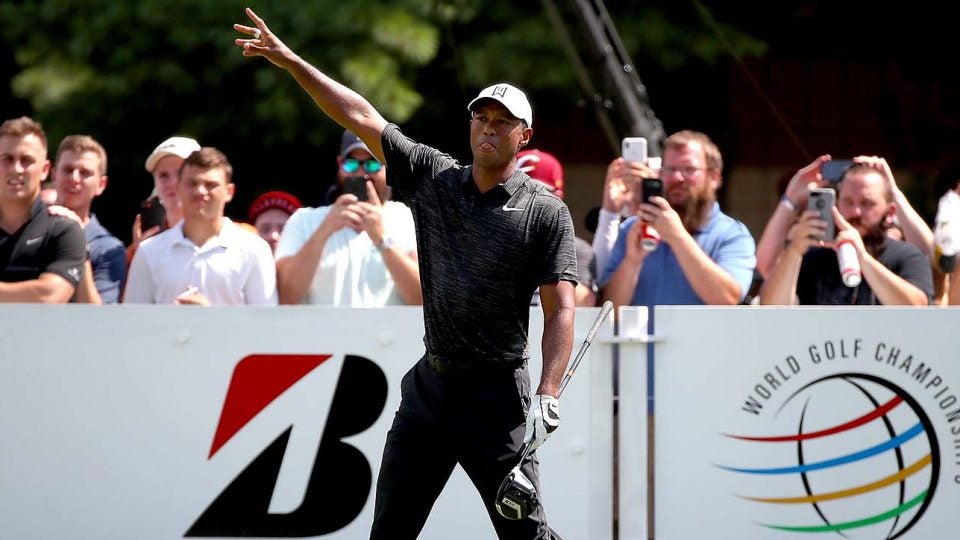 Woods hit eight of 16 fairways during a second-round 68.
Getty Images

Tiger Woods didn’t add much to his career highlight reel at Firestone during Friday’s second round at WGC-Bridgestone Invitational, but he remains in contention to win at one of his all-time favorite courses.

Woods fired a two-under 68 on a day where he struggled to find fairways with his driver and fought through a few tricky lies and uncomfortable shots. But thanks to some deft escapes from the trees, Woods has a chance at this no-cut event, as he’s tied for 10th place, five shots back. Tommy Fleetwood shot 63, the low round of the day, and he shares the lead with Ian Poulter and Justin Thomas.

Woods of course has won eight times in his career at Firestone, tied with Bay Hill and Torrey Pines as his most successful venue. This is his first trip to Firestone since 2014, and his last PGA Tour title came at this event in 2013.

So, there are plenty of good memories. But Friday was more of a grinding-type of round that never really got going, largely because Woods hit just eight of 16 fairways.

On the 1st hole, Woods went straight into defensive mode as he missed the fairway left and had a tricky lie in the deep rough near a bunker lip. As he followed through on the shot, Woods flashed some agility (and an apparently healthy back) while hopping into the sand trap. He stuck the landing, but couldn’t salvage a par and dropped to three under.

He recovered quickly, though. On the par-5 2nd, a hole he’s eagled five times in his career, he ripped a 2-iron to the center of the green and two-putted from 44 feet for a birdie. Then he dropped a birdie putt on 3 and it looked for a moment like he might be all-system’s go for a run at the leaders (Thomas, Fleetwood and Poulter were already in the clubhouse.)

No pars on the card thru 3.

Woods made another birdie on the par-3 5th when he knocked his tee shot to 12 feet and drained the putt. But wayward tee shots prevented him from sustaining any kind of run. On the 8th, Woods blocked his drive into the trees and had to rip an iron through a narrow chute. He pulled it off and saved a par.

Woods’s best shot of the day (non-escape edition) came on the tough par-3 12th, when he staked his tee shot and tapped in the birdie.

The hardest hole on the course Friday is no match for @TigerWoods.#LiveUnderPar pic.twitter.com/D0E0Xnl3LU

But he couldn’t keep a run going. On 13 he drove into the trees and got up-and-down to save par, but on 14 he missed another fairway, and his approach settled in the deep rough on the lip of a greenside bunker. He once again struggled with an awkward stance, never got comfortable over the shot, and chopped it through the green. It led to his second bogey of the day.

Woods had a good look at birdie on 17, but his putt hit the lip and stayed out. He two-putted for par on 18, and as players continue to fire rounds in the mid-60s, he’ll need to ramp up the pyrotechnics (and the fairways hit) to make a charge on the weekend.

“The golf course is playing very soft and very receptive. When you’re able to hit five-irons and they only roll out about a foot, the guys are going to put up good scores,” Woods said. “There are 40-plus guy that are under par, and that’s never the case here at Firestone.

“Tomorrow’s going to be a day where I have to go out and post a low one.”