Woods caught fire in his final nine of the Farmers Insurance Open and signed for a five-under 67 on Sunday on Torrey Pines’ South course.

Woods, who shot 70, 70 and 71 in his first three rounds, made five birdies over his final eight holes and finished 10 under overall. Woods tied for 20th and Justin Rose won. 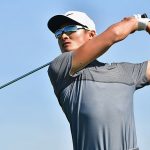 Starting on the back nine, Woods made the turn in even par (one birdie, one bogey) but got hot early on the front side. He sank birdie putts of 12 and 14 feet, respectively, on 2 and 3, and then moved to three under on his round by converting a three-foot birdie putt on 5.

He seemed destined for four birdies in a five-hole stretch, but he three-putted on the par-5 6th, missing his birdie try from 3 1/2 feet and settling for par.

After a par on 7, Woods stuck his tee shot on the par-3 8th to 11 feet and rolled in the putt to get to four under on the day. Closing his round on the par-5 9th, Woods hit his second shot to 37 feet and two-putted for birdie.

Woods made his season debut in the same event last year and finished three under overall and tied for 23rd. His next start is the Genesis Open at Riviera Country Club on Feb. 14. The Genesis is run by Woods’s foundation.