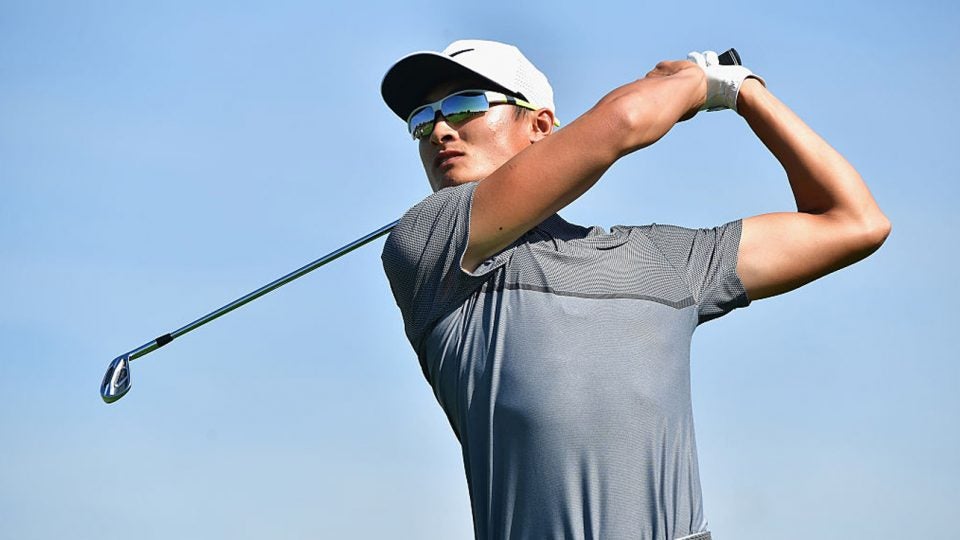 Haotong Li dropped from third to 12th after a rules violation on the final green cost him two shots.
Getty Images

Haotong Li was in position to finish third at the Omega Dubai Desert Classic this weekend at Emirates Golf Club and take home a nice paycheck. That was until he was penalized two shots on the final hole because his caddie was standing directly behind Li as he took his stance on the green.

Li, who won the event last year with a tournament record score of 23-under, made birdie on the last hole. However, the 23-year-old golfer from China was assessed a two-stroke penalty after officials determined that Li’s caddie was on a direct line behind the ball when Li took his stance on the green. Li would have avoided the penalty had he backed off and redid his putting stance. Here’s how it unfolded:

@EuropeanTour this is a marginal interpretation of the new Rule 10.2b @haotong_li good playing. pic.twitter.com/jNxT0aokxj

According to the USGA, one of the new Rules of Golf states that “the player’s caddie must not deliberately stand on or close to an extension of the line of play behind the ball for any reason” once the player begins taking a stance until the stroke is completed. However, no penalty is given out if the caddie does so by accident rather than as trying to help out the player.

The rule was changed in order to prevent caddies from helping their players with their stance. While a caddie is permitted to give advice on the line of play or how the shot should be played, the USGA argues that “the ability to line up one’s feet and body accurately to a target line is a fundamental skill of the game for which the player alone should be responsible.”

The USGA also says that allowing a caddie to stand behind a player and help he or she with their stance “undermines the player’s need to use his or her own alignment skills and judgment.”

Li finished the round at 1-over 73 and at 14-under for the entire tournament. To add insult to injury, his tournament record was shattered this weekend by Bryson DeChambeau. The No. 5 player in the world won the Omega Dubai Desert Classic with a score of 24-under 264 for his first European Tour title.

Below is a USGA graphic further explaining the rule Li violated.