Tiger Woods falters on Thursday at Liberty National, but will his season end this week? 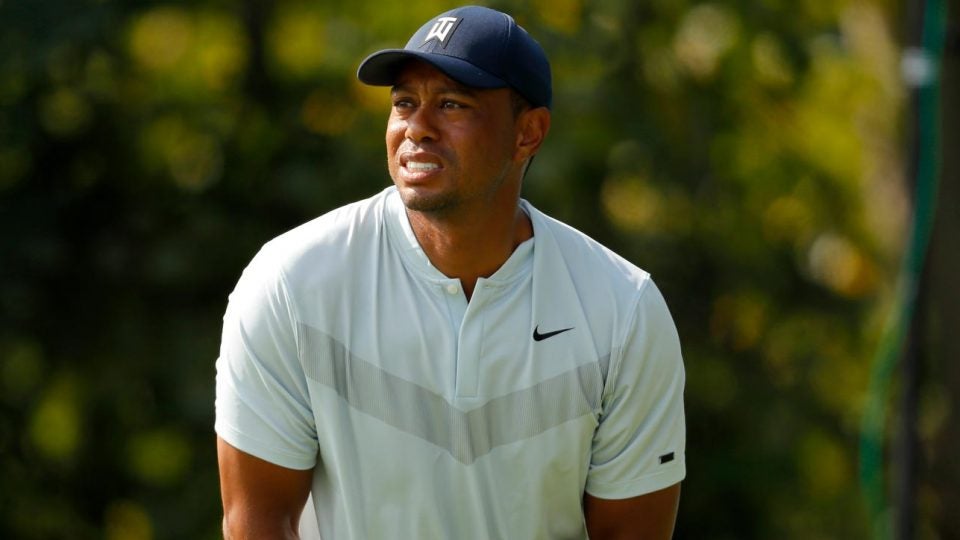 Tiger Woods during the first round of the 2019 Northern Trust at Liberty National.
Getty Images

Tiger Woods did not sound confident about his body and his game earlier this week, and it showed in the opening round of the 2019 Northern Trust. Woods faltered early and was unable to recover, finishing with a four-over 75. Now he’ll have to battle on Friday just to make the cut, and his presence in the remainder of the FedEx Cup Playoffs could be in doubt.

Woods, who admitted he was “feeling stiff” on Wednesday, opened the with two pars on Liberty National’s back nine. Then his scorecard got a lot more colorful. At 12, Tiger’s approach found a back left greenside bunker. From there, he proceeded to hit it over the green and into another bunker, though he got up-and-down to save bogey.

A routine birdie followed at the par-5 13th, which he reached in two, but Woods carded a double bogey at 14 when he airmailed the green with an iron off the tee. Two more bogeys came in quick succession at 15 and 17, dropping Tiger to four over at the turn.

But Woods received a much-needed break at the 1st hole at Liberty National. His tee shot just managed to stay out of the stream running down the right of the fairway, and he took advantage of it to record his second birdie of the day. However, a wild tee shot at the 3rd resulted in another bogey, dropping him back to four over, tied for the worst score on the course at the time.

Another bogey on his last hole of the day left Tiger signing for a 75 and a spot near the bottom of the leaderboard early on a day where birdies were dropping all across the property. Thanks to his tough start, Woods now faces the possibility of a second-straight missed cut.

But there are other concerns for Tiger beyond an MC. While he has already qualified for the second FedEx Cup Playoffs event next week at Medinah (he would stay inside the Top 70 in the FedEx Cup standings even if he finishes last this week), you have to wonder if his Playoffs run could come to an end sooner than that.

Woods mentioned his back stiffness again after Thursday’s round. “It’s a little bit stiff, yeah, but that’s just the way it’s going to be,” he said.

If he goes out tomorrow for the second round and struggles again with his body and game, it’s conceivable — though unlikely — that Woods could decide to shut it down completely to preserve his health. If Woods chooses that route, Friday could turn out to be his last round for a long time.