PORTRUSH, Northern Ireland — If Tiger Woods played any golf today, it wasn’t here. But by half past four he was on the practice tee in a spitting rain, the heavy stuff moving in. He was in no rush to go anywhere.

It wasn’t as if Woods’ bad shots were so alarming. Every top-10 player — Woods is ranked fifth in the world — has bad practice sessions. What was alarming was his disposition. Tiger Woods seemed to be having the time of his life out there.

There was a little entourage in close proximity. His designated wingman, Rob McNamara. Notah Begay, Golf Channel headphones strapped on his Stanford-educated head. Henni Zuel, Tiger’s good-humored GolfTV interlocutor. And of course Joe LaCava, Woods’s caddie. At 4:40 p.m., McNamara finally raised the mainsail — a black umbrella stamped TGR in white letters. There was some mildly ironic cheering among the 200 or so spectators in the bleachers, 100 or so yards away. The Open doesn’t like the crowds too near the players these days. Years ago, it was the complete opposite. 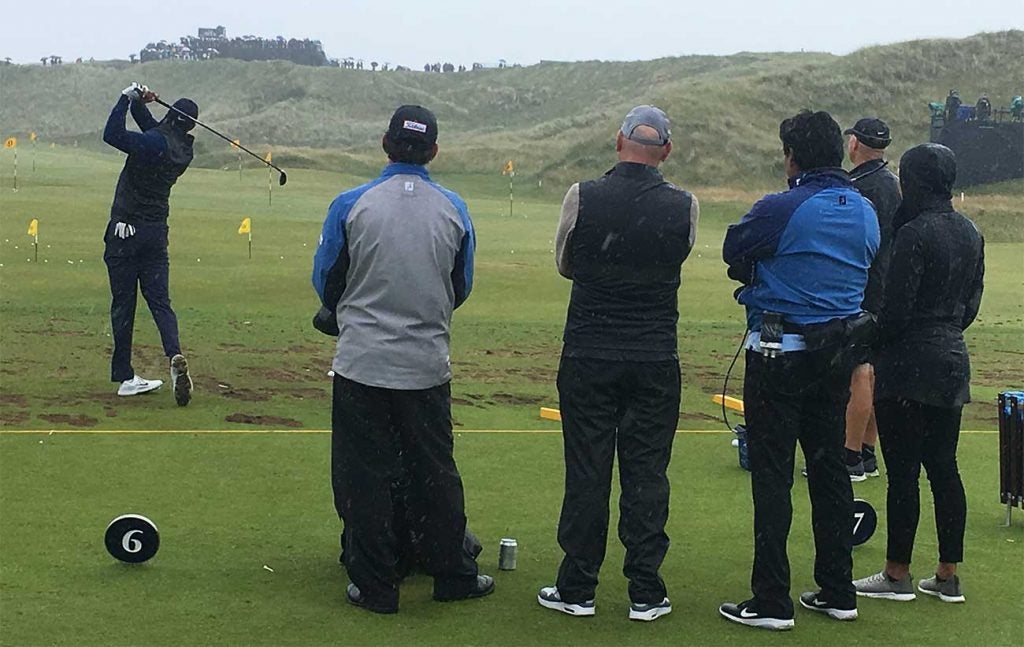 Tiger Woods hits shots on the range as his entourage watches behind him.
Michael Bamberger

Most of his shots were off a tee, with a dry ball tossed to him by LaCava. In the name of preservation, golfers of a certain age with fused backs don’t typically want to hit a long series of practice shots off hard turf. It was about 60 degrees but rain made it seem colder. The ground, amazing, stayed bone dry. All that porous sand, right underneath.

Maybe Woods’ form in the middle two majors (MC at the PGA; T21 at the U.S. Open) foretold nothing about what he will do here. Despite what he said at Pebble (can’t play in the cold) and what he said in his Tuesday press conference (game’s not sharp), maybe he will actually contend using a method nobody associates with him. The old let’s-lower-the-expectations trick.

The thing is, if links golf is about one thing — aside from irons on the face and making a series of good guesses about the ground game — it’s about mood. Bad things are going to happen in a round of links golf. How you handle them makes all the difference. Tom Weiskopf has been saying that for years. He was a golfing perfectionist, often hot-tempered, and everybody always said he should win multiple U.S. Opens and Masters. His only major victory came in the 1973 British Open, at bouncy Troon, and Weiskopf once explained that playing on the moonscape there helped him accept the bad stuff and move on. Mellow has never been Tiger’s thing, but he really is kind of different these days.

Now it was raining hard and Jason Day, along with every other golfer you ever heard of, decided to call it a day, his caddie, Steve Williams, leading the way. Williams, who was on Tiger’s bag for each of his three Open wins, hiked on by, nodding to the Tiger gang, taking a quick peak at his old boss, raindrops gathered on the brim of his black cap. Eventually Henni left and Notah left, amid a little round of bro hugs and palm shakes, likely signifying nothing except that it’s all good. Whatever that means. 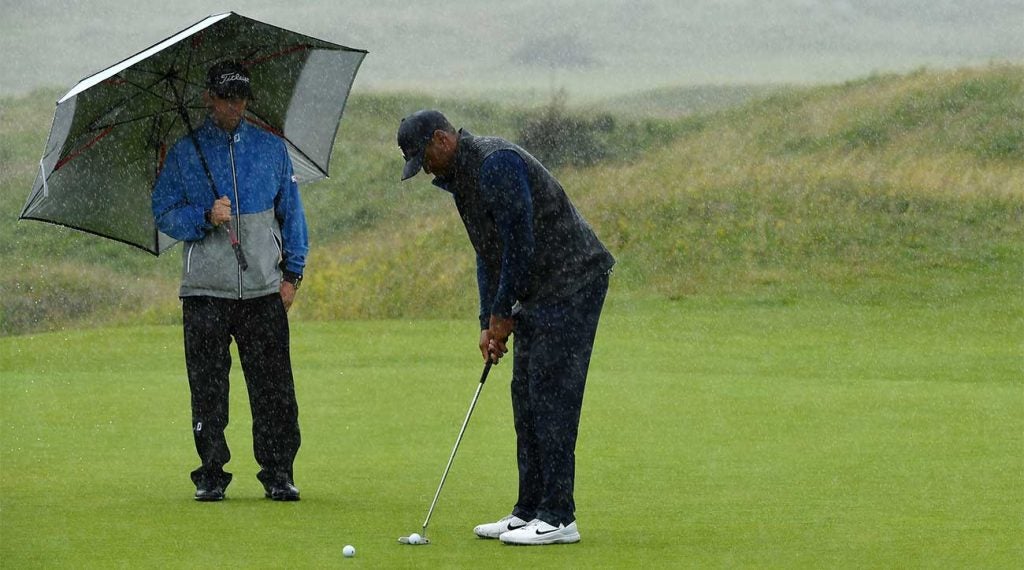 Tiger Woods lines up a few putts on the putting green on Wednesday at the British Open.
Getty Images

Woods picked up three balls, took a putter out of his bag, and headed to the nearby practice green, in no rush to go anywhere, despite the driving, soaking cold rain. There were no other players around at this point. Maybe this was just a smart practice session, preparing himself for the wind and rain that will likely visit his play at some point on Thursday or Friday. Maybe this was some sort of military-training exercise, in the name of mental toughness, the kind of thing he used to do with his father, Col. Earl Woods, and a Navy psychologist named Jay Brunza. One of Dr. Brunza’s current students, Dylan Frittelli, won in Quad Cities last week, using some of the mind-over-matter techniques that Woods first learned as a kid golfer winning amateur titles big and small. The practice green was slow and Woods worked on slugging long lag putts. Smart. Maybe 30 or 40 people were watching him, although it couldn’t be easy to see, amid all the raised umbrellas.

Finally, mercifully, Woods decided to call it a day. But he had one final act before the day was done. He tossed three balls to the front-row kids, so wet and cold they might have just emerged from the Irish Sea. Sometimes this act is done, by Woods and others, on a pro forma basis, but this was not that. This was playful and patient. He wanted to see where they went. The kids did not care that these Bridgestone balls were marked PRACTICE, and that Tiger had lifted them off the range. The fact is, they had seen Tiger Woods practice with them. They had been the property of The R&A. Now they were a piece of history, the balls Woods used for a practice putting session, in the rain, on the Wednesday before the first round of the 2019 Open Championship, the year Tiger Woods…