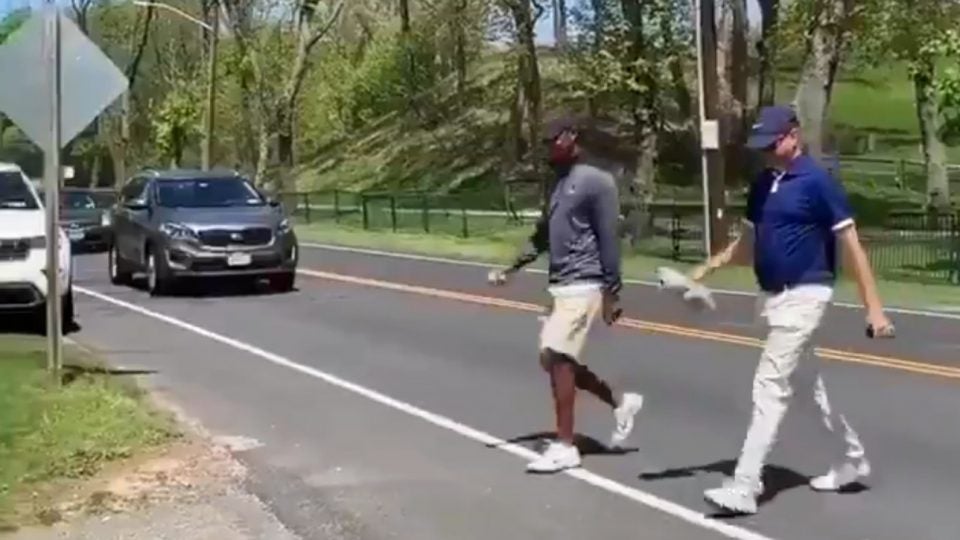 Tiger Woods crosses a street while playing a practice round at Bethpage Black on Wednesday.
@nimzack_mfd_2551 on Instagram

Imagine this scenario: you’re on your way home from work, driving past a golf course in your Long Island neighborhood, when you’re forced to stop your car to let a golfer cross the street. Now imagine that the golf course is Bethpage Black, and the golfer is Tiger Woods.

First, there’s the street-crossing video. Players are forced to cross a public street when making their way from the 14th green to the 15th tee at the Black Course. The amateur videographer caught Tiger, caddie Joe LaCava, and one other person as they waited at the side of the road to let a few passing vehicles stop, then threw a thank you wave at the motorists as they crossed.

Even if that doesn’t sound exciting to you, it’s well worth a view just to hear the fantastic Long Island accents of the few fans gathered on the roadside. (“Tigah, We love you, man! You’re da best evah!”)

🚨Tiger crossing the New York highway. What would you do ? pic.twitter.com/MPdo3uBeUF

The same fan, @nimzack_mfd_2551 on Instagram, stuck with Tiger to watch his tee shot on the 15th hole.

But Tiger wasn’t the only big-name pro out on Bethpage’s flagship course Wednesday afternoon. In a third video, Phil Mickelson can be seen putting on a green a few holes ahead as Tiger finishes up on 14.

#Phil #Tiger #tigerwoods #philmickelson #pga #bethpage #bethpageblack 2 of the GREATEST, just out for a Wednesday afternoon round of golf.

It’s a little taste of what’s in store for next week. In exactly seven days Tiger and Phil will begin their first rounds, and they might be fighting to attract the most fans. Mickelson is wildly popular in the New York area, and Tiger will be gunning to win a major at Bethpage for the second time.

One thing is certain: the New York faithful, and their accents, will be out in force.