Tiger Woods explains what he’s been doing during coronavirus shutdown 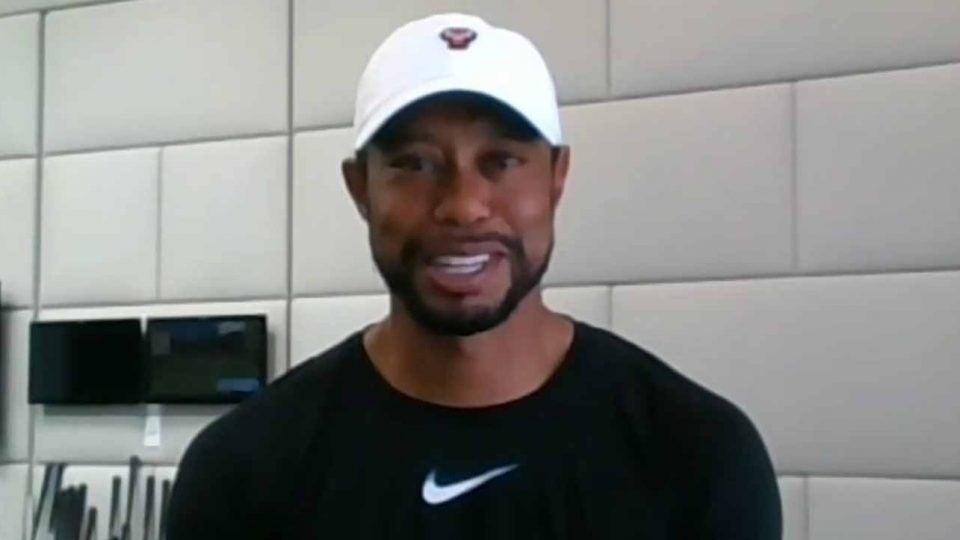 Tiger Woods joined GolfTV for an interview on Wednesday.

In his mind, Tiger Woods was supposed to be teeing off at Augusta National this morning. Yesterday, he would have likely been playing (or more likely, skipping) the Par-3 Contest. The evening prior he’d have served up his first Champions Dinner in well over a decade. And this past Sunday he’d have made dreams come true when he showed up at the Drive, Chip and Putt competition.

Woods sat down with GolfTV’s Henni Zuel for an interview Wednesday and said he’d been feeling peculiar on what would be the week of his Masters title defense.

“I was talking to [Justin Thomas] about this the other day and I felt really energetic, I felt really alive and wired and then kind of irritable and I didn’t know what was going on — and I realized it was Sunday morning and I was supposed to be flying up to the Drive, Chip and Putt to hand out trophies to all the award-winners,” he told Zuel. “It’s not that. We’re not playing this week. But my body was ready to go and I didn’t know why it was acting that way.”

We haven’t seen much of the reigning Masters champion since his last start in mid-February, a 68th-place finish at the Genesis Invitational. There were the occasional photos that surfaced of Woods doing normal-guy things like pumping gas, but apart from the occasional tweet and sorry-I’m-not-playing-this-tournament statement, we’d seen very little of the World No. 11.

But in the engaging 20-minute sitdown with Zuel (which you can watch here), Woods did open up on a little bit of what he has been doing during the coronavirus shutdown. Let’s run through them, in short order. Growing a beard, out of laziness, he said. Doing some cycling, more than he’s done in a while. He’s gotten stronger, he said, though not put on any weight (unlike his mate Bryson, who continues to balloon). He’s been working on a puzzle with his daughter Sam and his girlfriend Erica — an “ungodly” 3,000-piecer, he said — but his colorblindness makes him less effective.

“Once we get done with the borders, I’m useless,” he said.

There are other activities, dad-related stuff, things we rarely hear about. He’s been helping get Sam and Charlie dialed in to school via video, which he knows is tricky but fortunate, too. “I know not every student has that availability, so we’re very lucky in that regard,” he said.

There are other activities, too. Tennis in the backyard. Playing with the dogs. Working with his team at the TGR Foundation to figure how how to adapt to uncertain times and provide more options for online learning.

“For us it’s been these little bitty mini goals that allow us to keep moving forward, and next thing you know it’s nighttime and it’s time for bed,” he said.

Ah, and then there’s the golf. Woods has been able to practice at his home course, Medalist, which has remained open throughout coronavirus closures.

“Every course, virtually, to the south of us is closed but we remain open so it’s been nice to get there and hit golf balls and play a little bit, at least get some fresh air,” he said. Other members have been using the course to go for runs or walk their dogs. For his part, Woods was keen to mention precautions they’re taking when playing.

“Obviously we have our social distancing — we can’t touch rakes or touch the flags, one person per cart — but at least the members and their kids are able to get out there and play and do something active,” he said.

At night come putting matches against Charlie in the backyard, which is also referred to as the “Jupiter Island Practice Facility,” if you check his  architectural website. They play for some high stakes: Woods’ green jacket. Whoever wins on a given night gets to keep the jacket in their closet.

“Occasionally it’s gone into his closet,” Woods admitted, and insisted Charlie’s wins are fair and square. “There’s no wins that are given in this family, you earn all your wins. It’s been fun to see him tease me about beating me and being able to wear the jacket and have it in his closet — where he says it belongs.”

It’s a comforting interview, which I’d recommend watching. Woods looks good, and healthy. He’s unsure about when he’ll play next, which makes practicing particularly weird. He doesn’t make any guesses about when this will all be over, and he recommends listening to officials as to how we all proceed. He knows he’s got a better setup than much of the world, and seems to appreciate that. But he’s got a mantra that we could all learn something from, too.

“I go back to what my dad used to say,” he said, reminding Zuel that he’s a “military brat” at heart. “Just take it one meal to the next. So you go at it until the next meal, and you figure it out.”

You can watch the entire interview here.