What’s it like to caddie in the same pairing as Tiger Woods? It’s one wild ride.

DUBLIN, Ohio — When Pete Persolja, caddie to Keith Mitchell, arrived at the 1st tee on Sunday, he found Tiger Woods and caddie Joe LaCava waiting for him. And he couldn’t believe his ears.

“It was the coolest,” he said after the round. “Here we are, waiting to tee off, probably have at least five minutes before they’re going to announce Tiger, and I swear: not one person talked for those five minutes. Not Tiger to Joe, not me to Keith, Tiger to Keith, not the thousands of people watching. Not one of them said a thing. You could hear the birds chirping.”

“It was the quietest I’ve ever heard it in my life,” he said. “I could hear him grab a tee out of his back pocket.”

Both Mitchell and Persolja were playing in the same pairing as Woods and LaCava for the first time in their respective careers. Mitchell is a Tour winner and Persolja aka “Crunchy Pete” has become a cult hero in his own right. But one thing they agreed upon: this was unlike anything they’d ever experienced.

“It felt like I was in the last group, and I was not even close to that, just because of the energy and everything. It was awesome,” Mitchell added.

Both Mitchell and Woods began Sunday’s round four under, 11 shots off Martin Kaymer’s lead. It didn’t take long for their rounds to diverge. Mitchell started par-par-bogey-bogey-par. Woods started par-birdie-birdie-par-birdie. Through five holes, Woods was five shots up. Through nine holes, Woods was eight up. Team Tiger was sending the crowd into an uproar. Team Mitchell wasn’t sure how to feel.

“There’s obviously no other guy who can send it from pure silence to a huge roar,” Persolja said. But when the Tiger Faithful get roaring, they get running, too. That introduces extra complications for playing partners, who have to deal with mega-crowds on the move. 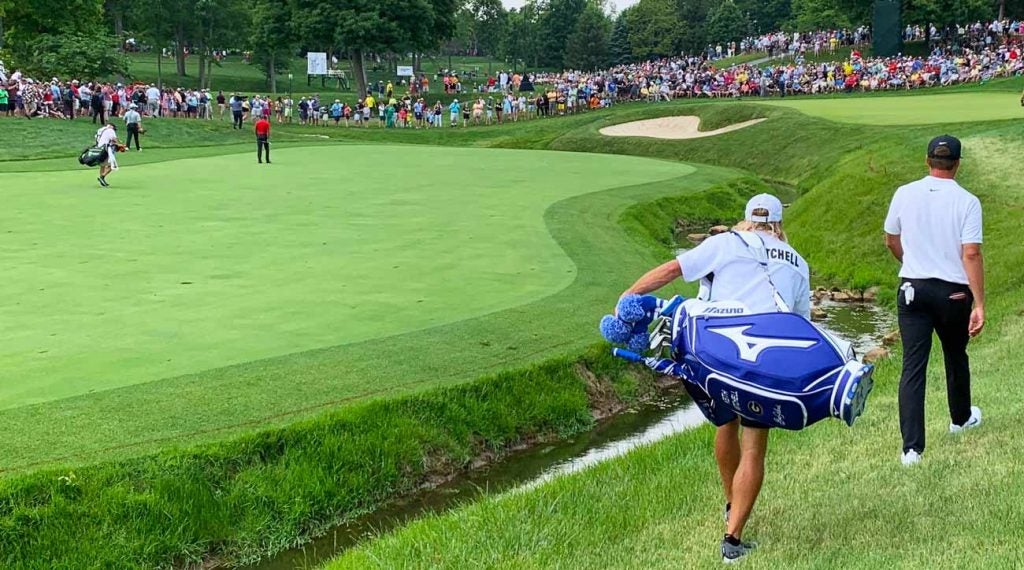 Woods’ caddie, LaCava, is well aware of the complications that come with playing in his group.

“The crowd’s always going to move when he putts out,” he said after the round. “Tiger’s pretty considerate that way. If he knows they’re going to move, he’ll mark it and wait most of the time. It’s just tough to control the crowd — even when we were playing with Rosie [Justin Rose, in the first two rounds] they were running around.”

While the first instinct may be to try to hold the mob in place, LaCava suggested that may not always be the best strategy.

“It depends what your guy wants,” he said “Some guys want you to try to stop the crowds if you can, but sometimes it’s more of a distraction if you’re screaming at the crowd and your guy is still trying to line up his three-footer. So it’s tough, but they get it. Most of the caddies are jacked up to get to play with Tiger.”

For his part, Mitchell felt like the greatest pressure came from himself.

“It wasn’t distracting. I was more distracted by myself because I wanted to play so good and I felt like my game was so good that I actually went the other direction,” he said. “I think it’s all personal…I think us young players that grew up watching Tiger, you want to play as well as you can.”

Woods made the turn at five under, canned a lengthy birdie putt at No. 11 and then poured in another at No. 12. He had hardly missed a shot; if anything, he had squandered birdie looks at Nos. 9 and 10. At that point, Mitchell said, he started worrying that he was delaying play, disrupting a rally.

“I felt like I got in the way after 12, when he made that putt on 11 and I hit it in the water, I thought I hit it in the bunker,” Mitchell said. His subsequent walk-back and drop led to a short delay, although Woods made his putt anyway. “I think it was No. 12 or 13, I was like, I’ll chip this on the green and make a putt and just go to the next hole,” Mitchell continued. Through 13 holes, he was 12 shots down to Woods. He couldn’t help but be in awe.

“He didn’t miss a shot. I mean, it was — I felt like I hit it good the first three days and wasn’t even close to that.”

The two were playing different golf courses, which meant there wasn’t a ton of room for interaction between caddies. “They struggled, obviously, so I didn’t see a whole lot of them,” LaCava said. “Pete was getting a bunker and I was doing whatever — twosomes you’re always running, anyway. We didn’t get a lot of conversations, but it happens.”

Mitchell and Woods had slightly more chance for interaction. “Him and Keith, they talked a handful of times, and you could tell they were laughing, so that was cool,” Persolja said. “I guarantee Tiger was a big influence on Keith…” He paused. “There he goes.” Woods was zipping by in his courtesy car, Stanford-stamped travel bag in the trunk, headed home. It took Persolja a moment to collect his thoughts. “He really has this presence. It’s cool.”

Woods wavered as Mitchell righted the ship coming home. Mitchell birdied 18, while Woods made bogey, cutting the deficit for the day to nine shots, Woods’ 67 to Mitchell’s 76.

So, big-picture, what’s it like, caddying alongside Tiger Woods?