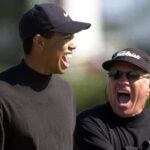 Tiger Woods and Butch Harmon during the 2000 Open Championship.

“It’s all these things. He’s a great guy. You just got to rib him.”

And at an AT&T Pebble Beach Pro-Am, rib Woods Kenny G did.

In one of the best golf gambling stories you’ll hear, one that not only involves Woods and Kenny, but Woods’ coach at the time, the renowned Butch Harmon, Woods and Kenny played a putting contest at Pebble, Kenny lost on the last hole, and he owed Woods $20. From there, Kenny tells it well.

“I said, great, that was fun. Here’s your 20, Tiger,” Kenny said on the podcast. “He goes, no, no, no, don’t worry about it, you can pay me some other time. I said, wow, Tiger, awesome. So I walk around and then I see Butch Harmon. I said, Butch, I just had this putting contest with Tiger, and I only lost 20 bucks. And he goes, he wants you to owe it to him, doesn’t he? I go, what? He goes, he wants to hold that against you. Here’s what you do — this is Butch telling me.

“So by the way, so I play my round of golf and I’m paired with Phil [Mickelson] and I made so many putts that day — I made like putts that were on like ESPN. So the next day Tiger walks by, and he goes, hey, saw your putting lesson really worked; I saw your putts on TV. And I go, hey, thanks, and he’s walking away and there’s Butch because Butch was his coach. And Butch is looking at me like, go get him, go get him. And I go, oh s—.

“So I’m nervous, but I walk up behind Tiger, stuffed the money into his back pocket and he looks around at me and I go, hey, f— you. And he looks at me and goes, hey, that’s a good one. Good job, bro.

“That’s how great Tiger is.”

Woods won, and Kenny G laughed last. Great indeed. The entire podcast is worth a listen, and can be found below.