Tiger Woods battles back to shoot 71, stay ‘right in it’ at Carnoustie 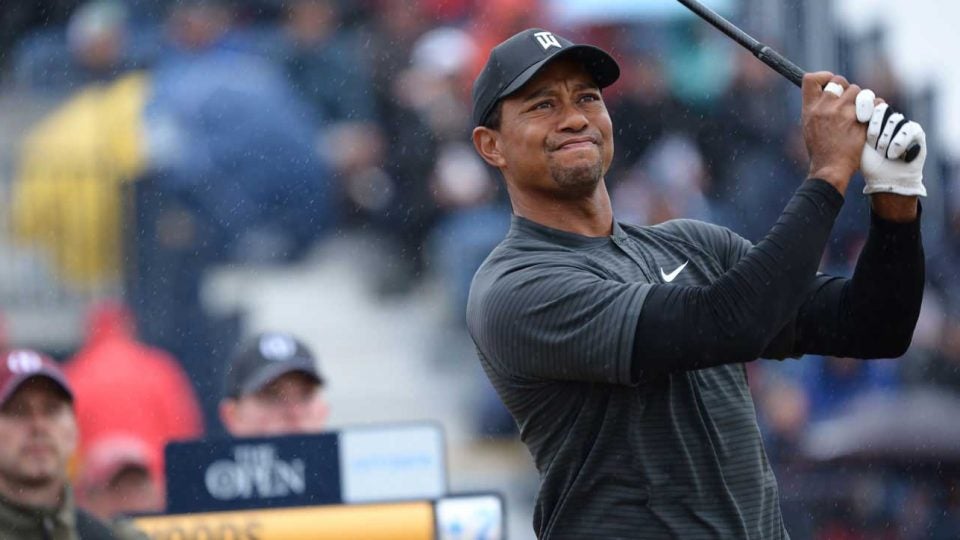 Tiger Woods plays a shot during the second round of the British Open.
Angus Murray

CARNOUSTIE, Scotland — There’s a moment of clarity before every competitive round Tiger Woods plays. As he walks to the 1st tee, optimism strikes, the large majority of the golf world believing more birdies than bogeys await.

And then, somewhere, the first bogey strikes. Woods rarely plays a completely clean round of golf these days, and while that makes him no different than Jordan Spieth, it feels more serious when it happens. On Friday, not one but two bogeys came early for Woods. He hacked out of a tough lie on the 2nd hole and three-putted the 3rd.

But oddly, that was it. In a spot where bad has normally become worse for Woods, he battled back, grinding to an even-par 71 for the second straight day.

“I played a little bit better yesterday,” Woods said. “Today wasn’t quite as good, but I finally birdied a par 5. So that’s a positive. Right now I’m six back, and by day’s end, I think I’ll be more than that. It will be a pretty packed leaderboard, and I’m certainly right there in it.”

Six back and right there in it — that was about all Woods had to say for himself. Perhaps he was a bit peeved about missing a 6-foot birdie putt on 18. At 142 strokes for the championship, he’ll begin Saturday in the middle of the pack.

Woods’s ability to grind out a solid round makes Carnoustie seem — dare we say it — gettable for the 42-year-old pro. Playing with the Pride of Scotland (Russell Knox) and the Pride of Japan (Hideki Matsuyama), Woods was the only man from the game to make the cut. Said Knox, “I enjoyed my time out there. I enjoyed watching him play. He’s Tiger Woods for a reason. He hit some incredible shots and just picked his way around the course well.”

Woods birdied the 4th and 5th and added circles to his card on the 11th and 14th as well. Only a bogey on the 16th kept him from his first under par British Open round since 2014.

Ball-striking always being his forte, Woods hit 11 of 15 fairways and 13 greens. Getting there was no issue, but Woods took 32 putts Friday compared to his 29 Thursday. Now you know why he’s not thrilled.

Would he have a few shots back if he could? Of course. But on Friday at the U.S. Open he was head down walking to his yacht in Sag Harbor. Friday at the Masters, he was headed to his rental home and setting the alarm clock for an early tee time. Recall that he and Ian Poulter were the fifth group out.

Here in Scotland, Woods is a bit more at ease. After his round, he promised he wasn’t headed to practice. Instead, he would head to the gym for a workout.

Woods spent part of his morning playing Carnoustie in a short-sleeve rain jacket. Whenever he was ready to play, he’d remove it to swing. When he was done swinging, back on it went. Off to swing, on to walk, back and forth. Finally, on the 4th hole, after making those two ominous bogeys, he removed it for good, replacing it with a vest.

For awhile there, it was a quasi-Superman cape. We’ll see if he wears it again Saturday.