He didn’t make it look easy, but Tiger Woods made a charge on the back nine of his second round to recover from early struggles and make the cut at the 2018 Farmers Insurance Open. His finished with a one-under 71, but it took four birdies on the back nine, including one on his final hole, for Woods to make his first cut since the 2015 Wyndham Championship.

His day got off to a rocky start on the first few holes. Woods hooked his drive at the par-4 10th (his first of the day) 65 yards left of the fairway. He got relief from the media tent and laid up, eventually saving par. Two poor chips at the short par-4 11th led to another par for Woods, but only after a clutch putt to avoid dropping a shot.

Things looked like they were trending in the right direction on 12. He stuck his tee shot at the par 3 but just missed the eight-foot birdie putt, settling for another par. The big hook returned at 13 when Woods drilled his drive into the bushes left, forcing him to surrender a stroke for an unplayable lie. After a couple more messy shots, Woods cleaned up a short one for a devastating double bogey that dropped him to two over, and three shots off the cut line at that point in the day. He closed out the front with five straight pars.

On the 1st hole, Woods’s 10th of the day, he got the spark he was looking for to start his final nine. He left his approach some 50 feet to the right of the hole, just off the edge of the green, but he sank the monster putt for his first birdie of the day. He would add another birdie at the par-5 5th hole to get back to even par. 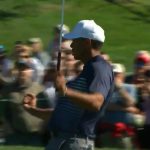 You may also like WATCH: Tiger drops 51-foot bomb for birdie in Round 2 at Farmers Insurance Open

By the time Woods reached the 6th hole, the cut line was flirting with two under, making his attempt at finishing safely above it that much more challenging. A brilliant chip from the right side of the green gave Woods an easy par at 6.

Woods stayed on a roll at the short par-4 7th, where a crafty chip led to a three-foot birdie putt. With that, his third birdie of the round, Woods moved to one under for the tournament, right on the cut line.

But another disappointment waited at 8. Woods came up short and left with his tee shot on the par-3, setting up a chip from a tight lie. Woods was unable to manage it effectively, hitting it past the hole and over the green, setting up a bogey to drop back to even par and one off the cut line.

But Woods did exactly what he needed to on his final hole. He found the green safely in three on the par 5, then hit a beautiful lag put from 75 feet to set up a tap-in birdie and the first made cut of his latest comeback.