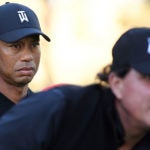 UPDATE: Due to heavy rain in the Hobe Sound, Fla., area, The Match II has been pushed back 40 minutes and will now start at 3:40 p.m. ET on the same networks.

There has been much talk about Tom Brady and Peyton Manning’s handicaps in the lead-up to Sunday’s big match. Brady is currently playing to an 8.1, according to his official number in the GHIN handicap system, while his golden-armed counterpart is a few ticks better, at 6.4.

But what about the other two protagonists in The Match: Champions for Charity? What of Tiger Woods and Phil Mickelson?

Mickelson keeps an official handicap index out of Whisper Rock GC in Scottsdale, Ariz. His last 20 posted rounds, all in competition and entered between August 2019 and March 2020, result in a gaudy index of +6.0.

Tiger Woods handicap requires more heavy lifting. Woods doesn’t keep an official ‘cap, at least not in the USGA’s GHIN system, so we leaned on two of the USGA’s handicapping whizzes, Steve Edmondson and Lee Rainwater, to compute the number for us.

Under the new World Handicap System, an index is calculated via the eight best scores from a golfer’s most recent 20 rounds. So, we grabbed Woods’ scores from his last 20 competitive rounds on the PGA Tour, paired it with the course and slope ratings from the championship tees at each of those venues, and sent the data to Edmondson and Rainwater.

Tiger Woods’ handicap index, for the purposes of this exercise, is +7.1, or more than a full stroke better than Mickelson’s.

That means if you play to an index of 14 — the average among male U.S. golfers — and you played a match against Woods, the 15-time major winner would have to give you a whopping 21 strokes. (At this weekend’s Medalist match, Brady and Manning, who are playing with Mickelson and Woods, respectively, will get only three shots a piece in the front-nine team best-ball format, before the match shifts to a no-strokes-allotted alternate-shot on the back nine.)

Curious about how your own handicap stacks up with America’s golfers? Here’s a handy chart courtesy of the USGA that shows how each index fits into the landscape of U.S. male golfers: