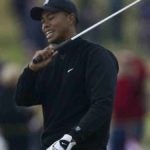 Welcome back to the Tiger Woods YouTube Project, where we’re here to remind you that life ain’t all sunshine and roses. We’re going through Woods’ life, one YouTube video at a time, and we’ve arrived at the rainiest, windiest stop along that road, with some help from an all-British roundtable. Come with us.

Let’s begin this episode of the Tiger Woods YouTube Project with a few basic facts about Tiger Woods entering the 2002 Open Championship.

-Tiger Woods had won the first two majors of the year.

-Tiger Woods had won seven of the previous 11 major championships.

-For the six years before the third round of the 2002 Open Championship, and the 12 years after, Tiger Woods did not shoot a single round in the 80s as a professional golfer.

-Tiger Woods entered the third round at Muirfield just two shots off the lead — in perfect position for a charge, in other words.

Then, golf happened. That’s where we come in — with some help from the good folks at Me and My Golf.

RELATED: Chapter 18 — Better than Most

But then golf happened. Woods teed off Saturday at 2:30 p.m., and here’s how he described the scene to ESPN’s Bob Harig in an excellent lookback from 2013:

“It hit when we were on the putting green getting ready to go,” Woods told Harig. “By the time we got on the first hole … the temperature dropped, rain was coming sideways, blowing. And gusts were over 40 [mph]. The fourth hole, a par-3, normally we were hitting 7-irons. I hit a 2-iron, and it probably should have been a 3-wood. O’Meara hit a 3-wood. And then the next hole was a 2-iron, 2-iron par-5 and I hit driver, 2-iron, 2-iron. And it was so cold.”

We had one YouTube video lined up for this episode, a strange medley of highlights from that day set to a Pink Floyd soundtrack. I’m not sure the reason for the Pink Floyd soundtrack, but I can assure you it did not add to the understanding of the day, and it did lead to the video being taken down. Thus we’re left without the perfect video, but this will give you a good idea of how things were, and if you’re a true sicko, there’s a 5-hour version of the day’s events that I’ll attach below that.

I’ve assembled a Brit squad, Piers and Andy from Me and My Golf plus our own Luke Kerr-Dineen, to break down the day’s events. One thing to remember: Had Woods shot 75 that Saturday and the same score in the other three rounds, he’d have ended up in a playoff. Shoot 74 and he’d be in possession of the first three majors of the year. Rich Beem’s one-shot win over Woods at that year’s PGA would have been that much more heartbreaking. Ah, the what-ifs. Here’s the squad:

What, if anything, do you remember about this day in particular? Do you Brits relish this type of weather when it comes time for the Open?

Piers Ward, Me and My Golf: I watched this in the pro shop at Oxley Park and remembered it being the worst weather I’d ever seen at an Open. I remember the weather being good in the morning and Justin Rose shooting 68 and getting to -2 and thinking, given how the weather was looking from lunchtime, that Rose was going to be right up there! The wind and rain was so extreme that the cameras couldn’t see the coverage! Players were hunching and hiding under umbrellas!

It summed it up when Tiger was 40 yards short on the par-3 4th, his cap nearly blowing off, hitting three clubs longer than the day before. The course was still playing really firm, and with the wind the course looked ridiculously hard. But I couldn’t believe how many spectators there were there, that was very impressive.

It was noticeable when he walked off the 18th green that he looked remarkably calm, had a little grin at his playing partner Mark O’Meara and had almost resigned himself to the fact that he gave his all on every shot but he was just in the middle of a vicious storm that saw temperatures plummet. I suppose you could say, ‘Well, why couldn’t he try and get it ’round in the mid-70s?’ But he was there to win his 3rd major in a row! He was chasing the Grand Slam and winning was all that mattered.

Andy Proudman, Me and My Golf: We are pretty used to this weather over here so it’s nothing unusual to see a bit of wind and rain, although this was a little more than a shower! I just remember that it was good to see the best players struggle and that I was excited to see how they dealt with it.

Luke Kerr-Dineen, managing editor of instruction: Between late 1999 and mid 2002, Tiger Woods wasn’t a golfer. He was superhuman. He was unbeatable; Tiger’s dominance had become normal. Inevitable, even. That’s what I remember about this round. The day Tiger’s peak officially ended. He came into the 2002 Open Championship on (another) streak of two consecutive majors, and came out with his second-worst finish since 1998, the first of an almost two-year major-less streak. And you know what? Yes, I did relish it. I relished the fact that the oldest and most prestigious championship was the site of it. And that it wasn’t the product of a tricked-up course, but of the elements. Something so basic and simple that has felled golfers across every generation.

What, if anything, does this teach us about Tiger Woods?

Piers: Two main things, for me! His drive and determination to never give up on a shot and his ability to move on from adversity and never let bad shots or a round effect his mental resolve. Hence his final-round 65.

Andy: That his desire to get the best score possible out of his round is always there. He has incredible resilience and the ability to not let previous experiences effect the present of future.

Kerr-Dineen: We go on about Tiger as a once-in-a-lifetime talent, which he undoubtedly is. But rounds like this, similar to his final round at the 2008 U.S. Open, prove that his determination and grit surpass his supreme ability. There’s no quit in him, regardless of what is thrown in way. That, more than is talent, is the indefensible engine of Tiger’s success.