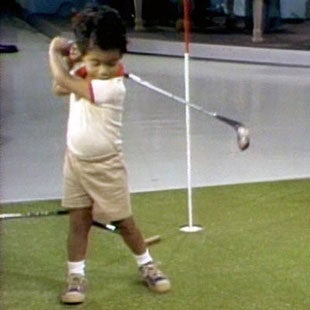 Tiger Woods made his television debut at age 2.
CBS/Getty

Tiger’s Biggest Moments: No. 36 – Appearance on The Mike Douglas Show

Tiger Woods started at the top in television.

At age 2, he appeared with his father, Earl, on a national daytime talk show, “The Mike Douglas Show.” The other guests on the show that day were legendary names as big as Tiger would one day become—comedian Bob Hope and actor Jimmy Stewart.

Douglas spotted Tiger in a Los Angeles news station’s feature about kids hitting balls at a driving range. “Tiger stood out like a sore thumb because they were all swinging like babies,” Douglas told The Cincinnati Enquirer in 2000, “and Tiger swung like he does now.” The rest is history. At the urging of Douglas, Tiger was book for the show on Oct. 6, 1978. Douglas introduces young Tiger, who strides across the stage in adorable fashion carrying his tiny golf bag. Tiger hit some full-swing shots off a mat, then had a putting contest with Hope, who was a pretty good amateur golfer in his day. Tiger hit two putts ten feet past the hole, then picked the ball up, walked over and placed it right next to the cup. The studio audience roared, and Hope bent over laughing.

“That tape has played all over the world,” Douglas said then. “I did over 6,000 shows, interviewed over 40,000 people and I had seven presidents, or people who would become president, on the show. And the most exposure I got was for the show with Tiger Woods.”

The Douglas show was nationally syndicated from 1963 until 1982.