Tiger Woods’ 40 Biggest Moments: Shot in the Dark at Firestone 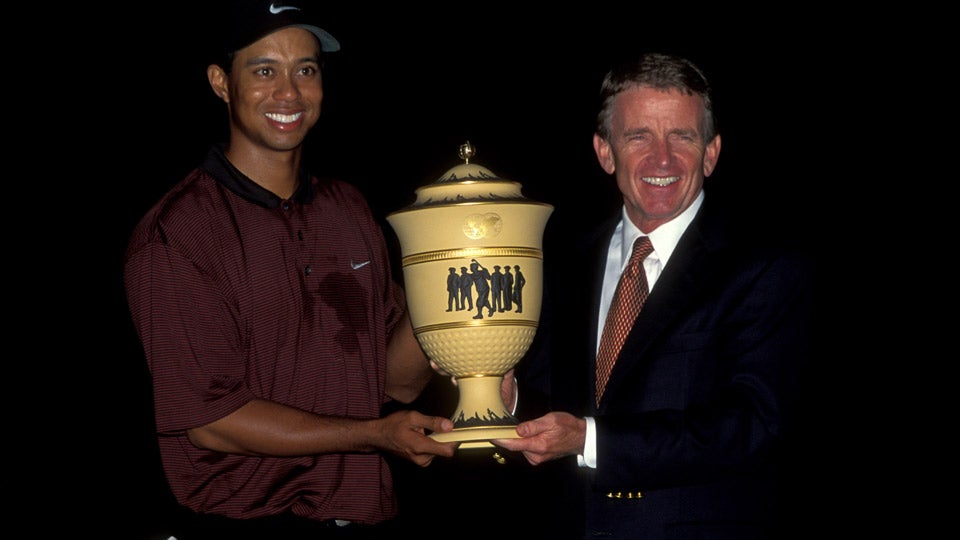 One of the most memorable shots Tiger Woods ever struck was also one that no one actually saw.

Due to a storm delay, Woods and Hal Sutton finished the final round of the 2000 NEC Invitational at Firestone Country Club in near-darkness at 8:30 p.m. in Akron, Ohio.

Tiger was coming off a scintillating PGA Championship playoff victory over Bob May the week before, and as he stood in the fairway on the 18th hole, 168 yards from the pin, fans gathered at the 18th green could hardly see him. All he had left was an 8-iron shot and after he swung, long seconds passed until, as I wrote for Sports Illustrated then, it appeared “out of a dark sky as suddenly as if Scotty had just beamed it down from the starship Enterprise.”

The ball landed just past the flagstick and spun back to within two feet.

The crowds roared and many of them held up burning lighters, a rock concert tradition, and gave Woods a thundering ovation as he approached the green.

Asked where it ranked among his best shots, Woods replied only half-jokingly, “I don’t know, I couldn’t see it. But I could hear it.”

It was dark enough that Tiger wouldn’t normally have played that shot. Except he had a gigantic lead — that last birdie left him at 21 under par, 11 strokes ahead of the nearest contender. Also, he just wanted to get done. He battled flu-like symptoms all during the final round, forcing him to make numerous restroom stops during play and another one immediately after finishing.

The win was Tiger’s eighth in 2000, his second straight year with at least eight titles.

Darren Clarke, who beat Woods in the 36-hole final of the World Match Play Championship at La Costa earlier in the year, left a message on Tiger’s answering machine after Tiger’s U.S. Open victory at Pebble Beach and probably should have reprised it after this finish in Akron: “The better you play,” Clarke told him, “the better it’s making me look. So keep on going.”