Tiger Woods’ 2020 schedule: What tournaments will Tiger play this year?

UPDATE: On Thursday, January 9, Tiger Woods officially announced that he would make his first PGA Tour start of 2020 at the Farmers Insurance Open at Torrey Pines in late January, a tournament he has won seven times. At the Farmers, Woods failed to add an eighth title, but he played well enough to earn a T9 finish to start the year with a Top 10.

His next tournament was the 2020 Genesis Invitational at Riviera in February, where he made the cut before shooting 76-77 to finish last in 68th place. Woods then sat out the WGC-Mexico and the Honda Classic before his agent announced that he would also skip the Arnold Palmer Invitational due to a stiff back. He is next expected to tee it up at the Players Championship at TPC Sawgrass, which begins March 12.

Tiger Woods had a busy few months to close out 2019. He underwent his latest surgery at the end of August, returned and won a PGA Tour event in October, and then captained the 2019 U.S. Presidents Cup team to victory in December (while recording a 3-0 record on the course).

The questions Tiger fans are asking now are what will his playing schedule look like for 2020, and, where will he play next?

The truth is, Tiger has kept his Tour schedule for the upcoming year secret, as he usually does. He rarely commits to events too far in advance, with occasional exceptions. Strangely, even though he hasn’t finalized his schedule for 2020, he’s technically already won a tournament this season. The Zozo Championship, which Tiger won to tie Sam Snead’s all-time Tour record of 82 wins in October, is part of the new wraparound 2019-20 PGA Tour season.

Fortunately for our purposes, Tiger is a creature of habit who often plays the same events season to season, so we can get a good idea of which tournaments he’ll play in 2020 based on previous years.

For starters, it is almost certain that he starts his 2020 campaign at the Farmers Insurance Open at Torrey Pines (Jan. 23-26). Woods chose to start his last three calendar years at the Farmers, a tournament he’s won a record seven times. Torrey Pines’ South Course also hosted his 2008 U.S. Open victory, so there are few more comfortable settings for him to work out the rust.

Where Tiger will show up next after the Farmers is a trickier prediction to calculate. Woods has been open about the realities of his battered body and its effect on his ability to play as frequently as he used to, even admitting to playing too much in 2018. In 2019, he played in 12 official Tour events, down from 18 the year before. 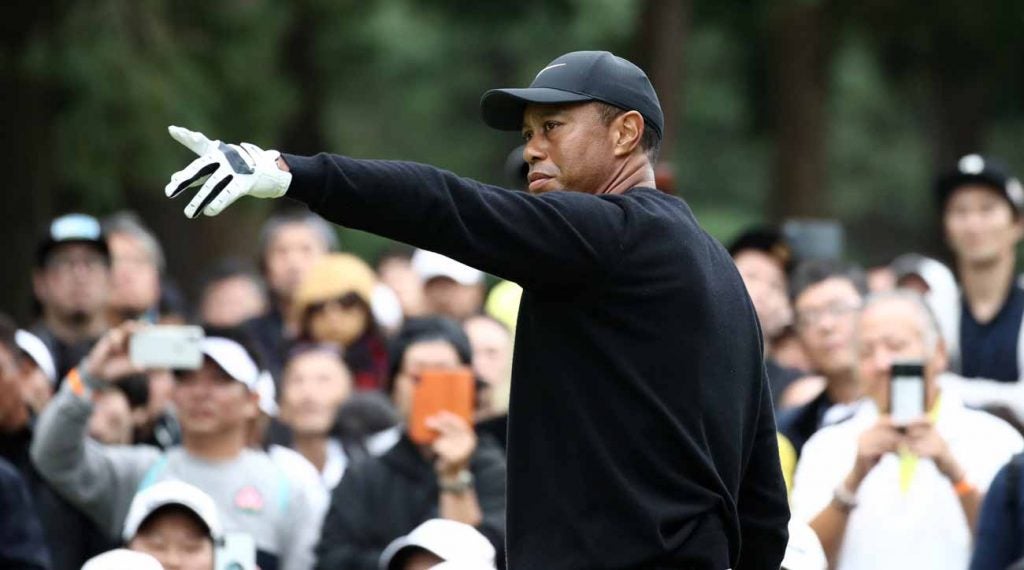 Tiger Woods during his most recent Tour start at the Zozo Championship, which he won.
Getty Images

All signs suggest he’ll try to keep his total starts down again this year to give his body as much time to recover as it needs. It’s unlikely he’ll play back-to-back weeks at any point. So even though he loves Pebble Beach and has played the AT&T Pebble Beach Pro-Am many times, he’s probably going to skip this year’s edition (which runs from Feb. 6-9).

But we are certain he’ll tee it up the very next week at the Genesis Invitational, where he’ll play tournament host. Due to his hosting duties, Woods already committed to play in the event back in November.

After that he’ll most likely skip the WGC-Mexico, which will be played the week after the Genesis in favor of the Honda Classic beginning Feb. 27. Either that or he’ll play the Arnold Palmer Invitational a week later, but likely not both. With the Players Championship following the API beginning on March 12, Tiger would have to tee it up in three straight weeks to play them all, which is just not going to happen this year.

News
How much money did Tiger Woods make this decade?

That brings us to April and the Masters, where Tiger will make his next start and attempt to defend his title. After that, he’ll most likely follow the same summer schedule he opted for in 2019, playing the PGA Championship at TPC Harding Park (May 14-17), the Memorial (June 4-7), the U.S. Open at Winged Foot (June 18-21), and the Open Championship at Royal St. George’s (July 16-19).

Believe it or not, the Open could be his final Tour event before the FedEx Cup Playoffs. If Tiger gets what he wants and qualifies, his focus will then shift to the 2020 Olympics in Tokyo, which runs July 30 to Aug. 2. If all goes well, he’ll finish his season out with the three playoff events, culminating at the Tour Championship Aug. 27-30.

News
Azinger: Why Tiger Woods has an edge on today’s young players

In short, if you’re a Tiger fan, you won’t have to wait long to see him on the PGA Tour again, though you may not get to watch him as often as you’d like this year due to the demands of his now 44-year-old body. But given his age and injury history, we’re all lucky to get to watch him play golf at all, let alone compete at the highest level.