What’s it like when Tiger Woods comes to your hometown? 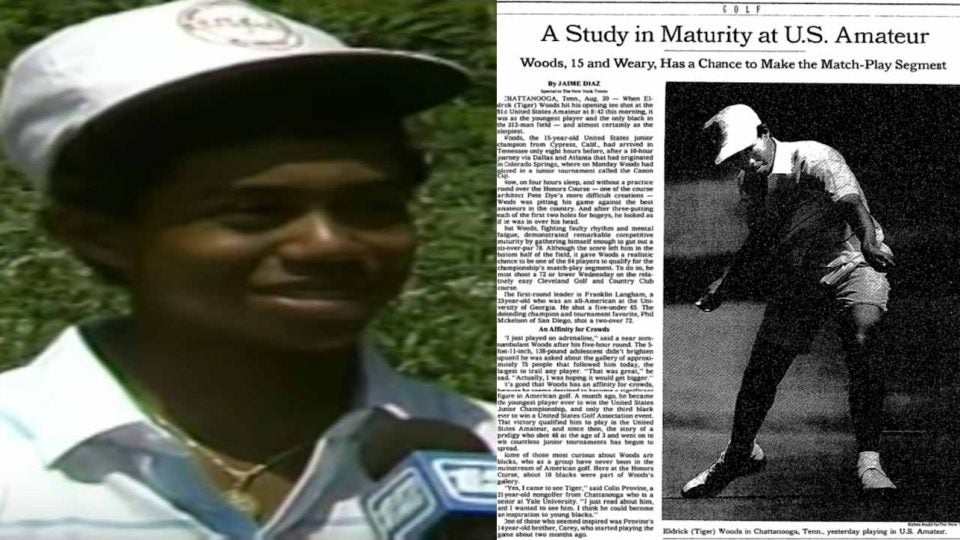 The New York Times followed Woods to Chattanooga in 1991.

Chapter 4: What’s it like when Tiger Woods comes to town?

Before Rob Collins was among the world’s hottest young golf architects, he was a kid in Chattanooga, Tenn. In 1991, there was another kid about the same age from Cypress, Calif., making his first-ever trip to Chattanooga, to play the U.S. Amateur. Today, Rob Collins remembers what it was like to have teenage sensation Tiger Woods come to town.

But first, the video!

DYLAN DETHIER: 1. As a son of greater Chattanooga, I’m wondering: Were you aware that Tiger Woods was coming to town? Did that register as a big deal?

ROB COLLINS: Oh, yeah. I definitely remember the ‘91 Am coming to town and what a big deal it was. Locally, The Honors Course was seen as this rare gem that only a few had the privilege of seeing. I also remember there being a lot of civic pride in a Chattanooga area course hosting such a big event.

As far as Tiger is concerned, I still remember being aware of him. I’m six months older than him, and I remember wondering how he and other child prodigies were capable of succeeding at such a high level. 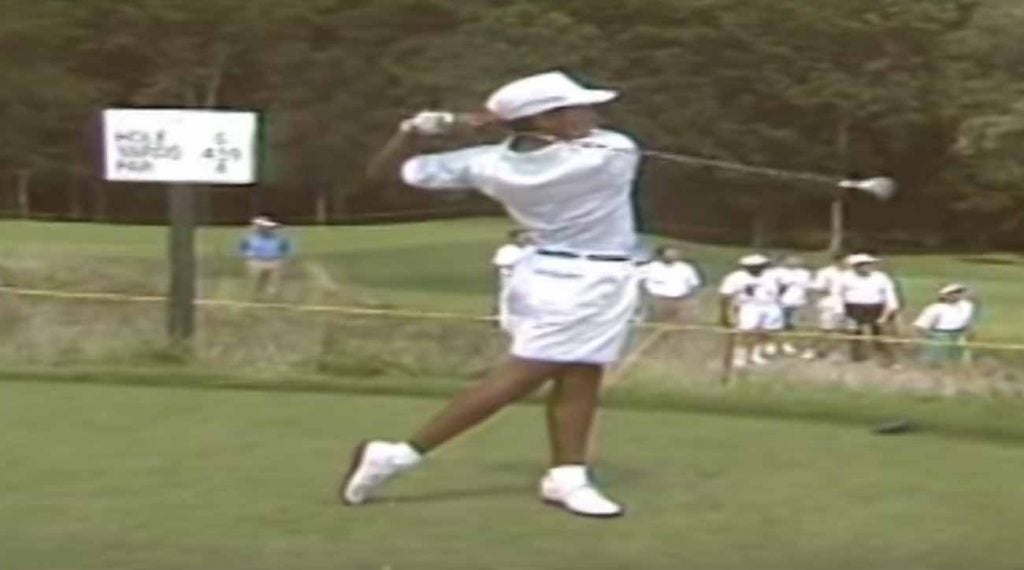 DD: What are your first impressions rewatching the video? What do you make of Woods’ mindset heading into the event?

RC: It’s a time capsule, and I’m taken immediately back to what life felt like at that time. The hats, the fashion — or lack thereof. It seems fresh in my memory. As far as his mindset is concerned, it’s clear he was there to win. It’s no different than he is now, which isn’t surprising — but it was fun to see.

I did cringe at the awkward way they mention his race, “a player who happens to be black.” It reminded me of the infamous Doug Williams interview before his Super Bowl appearance.

(Ed. note: Before the 1988 Super Bowl, Redskins quarterback Doug Williams was deluged by a string of race-related questions, most infamously this one: “How long have you been a black quarterback?”

“I’ve been a quarterback since high school,” Williams responded. “I’ve always been black.”)

DD: I’m struck by Woods’ desire for bigger crowds. Writing for the New York Times, Jaime Diaz observed a gallery of 75 or so watching Woods in the first round. He’s always played well in front of an audience, but I never remember him actively rooting for more people around — if anything, I’d imagine by now he’d prefer some anonymity. Is there anything Tiger says in this interview that sticks with you?

RC: Well, it’s important that he says he’s not famous “yet.” He knew what was coming — as if it was preordained. I think it shows again the power of his mind and how important his vision and mindset have been to his success.

DD: It’s notable that Tiger refers to his stepbrothe, Kevin, who’s carrying his bag here, as “my brother” — because I grew up thinking of Tiger basically as an only child. Family deep dive aside, my point is this: The 1991 U.S. Am was a LONG time ago. Many things have changed. How has Woods changed since then?

RC: I didn’t even realize he had a stepbrother. That stuck out to me as well. As for Tiger, I’m sure he’s changed. We all have! But the impact of his close family on his life is well- documented, and you get a glimpse of that here, for sure. 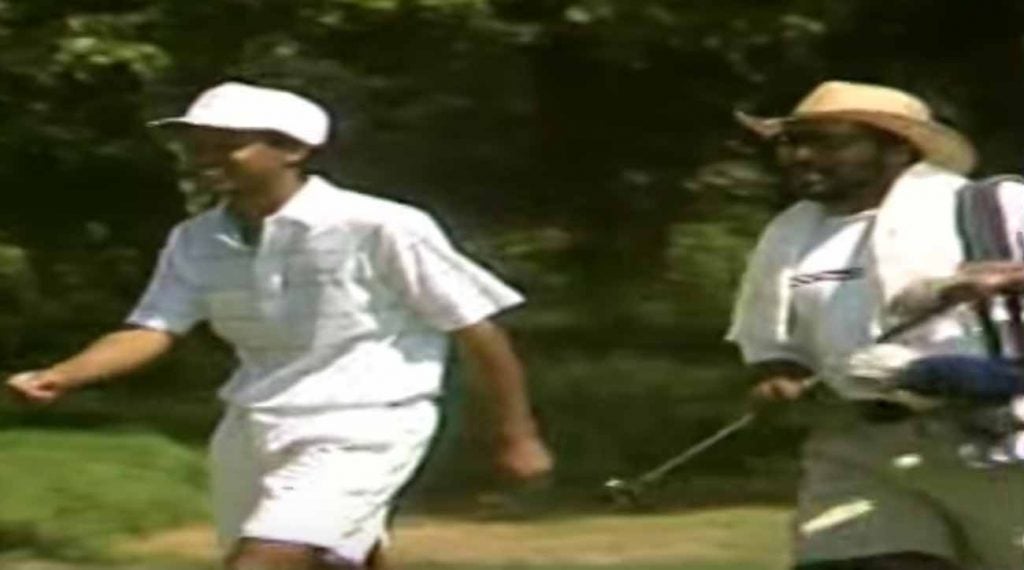 Tiger Woods and Kevin Woods, who caddied for him at the '91 U.S. Am.

DD: Tiger returned to The Honors during this time at Stanford — and won the NCAA Championships there. Was Woods a bigger deal the second go ’round? What do you remember of NCAA Tiger?

RC: Oh, I remember his visit in ’96 vividly. He was a huge deal at that point, having won the last two U.S. Amateur tourneys. I went to The Honors one day during that event with my dad and we followed Tiger for 16 holes, and in many cases we were on the front row of the tee box.

Every time I play the Honors (and it would be another 14 years from that spring in ’96 until I had my first round there! Special shoutout to 18 in America by the interviewer in this article), I think about his tee shot that day on the fourth hole, a gentle dogleg right. He hit this towering fade that cut the dogleg and was so far beyond his competitors that it was blatantly obvious he was on another level than everyone else. It even brought a little smile to his face. To this day, I think about how he turned pro only three months after that. From that point forward, it would be forever impossible to get a front row seat at an event in which Tiger was competing.

It’s also well-known locally that he triple-bogeyed the 9th when he got above the hole and his chip trickled into the pond on the left side of the green. In spite of that, he still ran away with the tournament. 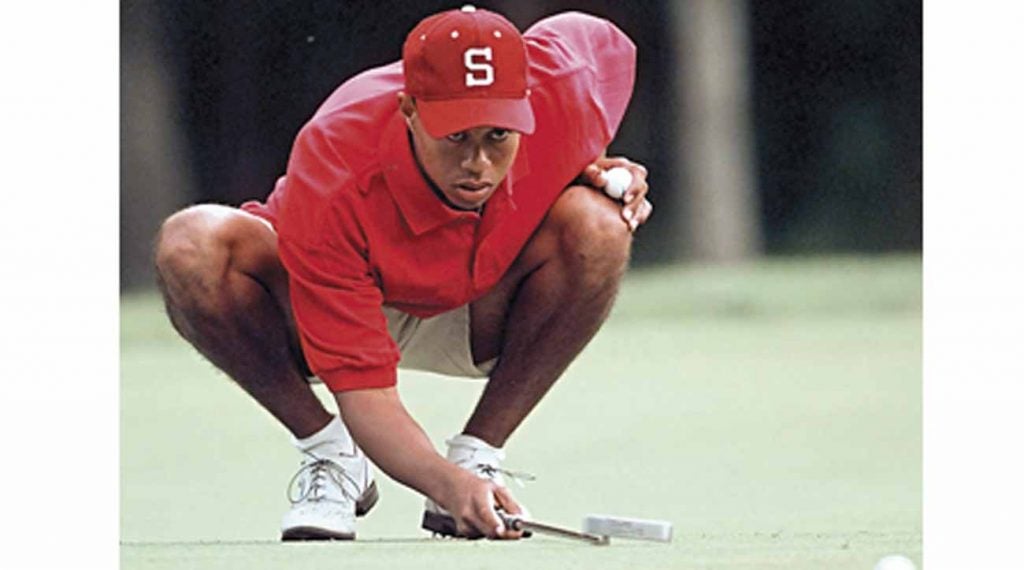 Tiger Woods returned to the Honors Course in 1996 and won the NCAA title.

DD: What’s your favorite memory from Tiger in Chattanooga?

RC: That day with Dad at the Honors is something I’ll never forget. As a side note, I remember seeing his Mom and Dad in the gallery, too. We were right on the cusp of the golf world changing forever.