Tiger likes the idea of shaking up formats, too: ‘Anything to draw interest’ 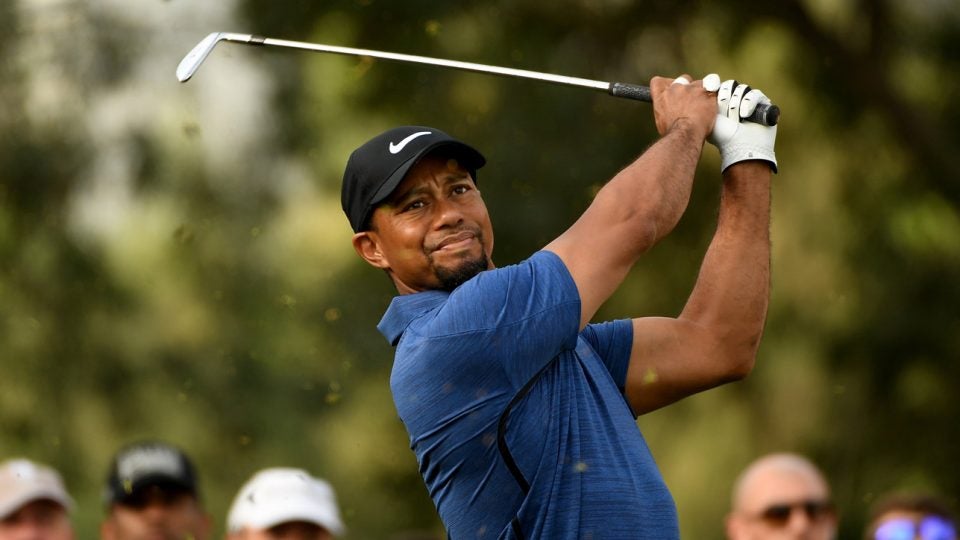 Would Tiger be open to playing an alternate-format Tour event? '[I support] anything to draw positive interest in golf," Woods said.
Ross Kinnaird/Getty

The old New Orleans tournament—oh, what the hell; let’s give ‘em a shout-out: the Zurich Classic!—is creating an interest with its new two-man team format. A format from yesteryear that suddenly seems brand new. Some of you know that Byron Nelson’s run of 11 straight victories in 1945 began at the Miami International Four-Ball, playing with Harold (Jug) McSpaden.

One of the reasons we’re so taken with the Zurich format is that the pros are playing our game, or a version of it. Four players get together on a Saturday morning, it’s two-on-two, without the “shirts and skins” divisions. That’s at the heart of the American golf experience.

The PGA Tour would benefit from more departures from 72-hole stroke-play events. That’s not just my opinion. Tiger Woods makes the case for new types of events on pages 207 and 208 of his new book about his 12-shot win in the 1997 Masters. He writes, “I would love it if we played a tournament every year where we had to use half a set. Or play with persimmon and balata on a 6,400-yard course. It would be fun for us to do a couple times a year. Low score would still win. The best player would still win.”

I love these ideas. Woods, 41, played his early golf and much of his celebrated amateur career with the soft, high-spinning balata ball and persimmon woods. He won his first Masters with a small-headed, steel driver and a Titleist Professional ball, a forerunner to the Titleist Pro V1, which many think paved the way for the modern smash-and-grab game played on Tour today. A quick and relevant aside: Curtis Strange told me at the Masters this year that he won the 1988 and ’89 U.S. Open with a MacGregor ball that he said had very similar playing characteristics to the Pro V1. That is, it curved less on tee shots, had a harder feel for chipping and putting and held its line better in the wind than the traditional balata ball.

I believe Woods would have won 100 Tour events, including 20 major titles, had equipment standards never changed since, say, 1980. Golf took more skill when its equipment was more primitive.

By email and through his representatives, I asked Woods what he would think about having his own Tour event, the Quicken Loans National, played with seven clubs. Not for this year. The tournament, in Potomac, Md., begins on June 29. But somewhere down the road.

Woods said, “I don’t know if the Tour is ready for that, but maybe someday it could happen. For now, an unofficial event or an exhibition in that format would be cool to see.”

“I think it would depend a lot on the player, and what he’s comfortable hitting, on which seven clubs he’d select,” Woods said. “I would take a 3-wood, 2-, 5- and 7-irons, a couple wedges and a putter.”

He’s obviously given this some thought. My feeling is if you were going to have a tournament with a restricted club count (the regular limit is 14), the really interesting number would be four. Players would be manufacturing shots now and again with seven clubs. With four they’d be doing it on almost every shot. It would be an incredible test. It would be a powerful reminder of how some golfing artistes, like Seve Ballesteros and the underrated Carlos Franco, learned the game with very few clubs. It would be fascinating to see how the players would adjust their in-the-bag lineups on a daily basis. I once played in a four-club, nine-hole event, and it was one of the most memorable 90 minutes of golf in my life. In theory, fewer clubs should speed play.

A quick note to manufacturers who might worry about an event in which players carry seven clubs or four clubs or whatever it may turn out to be: Many beginners are overwhelmed by the prospect of 14 clubs. Seeing the best golfers play with far fewer clubs will make the game more inviting to more people. In time, it will improve business! You’ll sell more clubs.

I asked Woods what he thought about a four-club event. He said, “It would be a great test of how creative a player could be, and low score would still win.”

Low score would still win. That’s why all this makes sense.

With seven in the quiver, I am surprised Woods would want to carry a 3-wood and a 2-iron. But such debates would be a huge part of the fun. (My four: lofted driver, 22° hybrid, wedge with bounce, putter. That would actually be a perfect modern starter set, along with a strong 8-iron.)

I asked Woods how he would feel about the Masters being played with a tournament ball. And if so, should it be balata or something else?

“The Masters always has the option of using its own ball. I remember when Hootie implied that might happen,” Woods said, referring to Hootie Johnson, the Augusta National chairman before Billy Payne. “The ball doesn’t have to be balata, but there has to be a limit on how far it can travel. As a golf course architect, I hate to see outstanding, classic courses not played the way they were intended.”

I asked Woods a fantasy question: Whom would he pick for a two-person team competition? To get him in the mood, I offered a few names: Young Tom Morris, Ben Hogan, Walter Hagen, Annika Sorenstam, Jordan Spieth.

“I’d hate to pick one, but that’s a pretty strong list,” Woods said. “I’d add Jack, Stricks [Steve Stricker], Seve and a few others to the group too. I wouldn’t leave my pop off of it, either.” Earl Woods was a good putter, and he carried a long needle.

I asked Tiger how he would feel about a regular-season event in which players from the PGA Tour and the LPGA would compete as two-person teams. Woods said, “I think a mixed-team event would be good. I played in the old JCPenney Classic in 1996 with Kelli Kuehne, and we finished, I think, tied for second. We had a lot of fun. [I support] anything to draw positive interest in golf, [anything] that would be good for the game.”

Woods’s memory is correct. He and Kuehne finished a shot behind Donna Andrews and Mike Hulbert.

I find Woods’s responses fascinating in a number of ways. You can see how much he thinks about the game and that he is open to new ideas. You can tell he wants to see the game prosper, and he wants to contribute to it. (His course-design work seeks to find paths to the game for every level of golfer.) And you can see he is a person, like Palmer and Nicklaus before him, who can have a long and productive life in golf whether he is competing or not.

But before he plays his final events, it would be neat to see him compete in (say) a seven-club tournament (or four!), a balata-and-persimmon event, a mixed-team event and a two-man team event. The four majors are well-established. Four minors in the heart of the real golf season would be huge fun.