Tiger is talking smack but thinking big picture: I’m fully aware of how special this is for me’

PONTE VEDRA BEACH, Fla. — “We all know as we age that we’re not going to be as athletic as we used to be, and so we have to do it different ways,” Tiger Woods said during his Tuesday press conference at the Players Championship.

He’d been asked about LeBron James, but Woods was clearly speaking about his own experience as he continues to try to do it a new way.

It’s possible that we’ve finally settled at the correct level of expectation for Woods. Top fives in the leadup to Augusta had sent the he’s-back!-o-meter through the roof. But now, after middling, distinctly flawed showings at the Masters and the Wells Fargo Championship, expectations have readjusted again, settling somewhere around cautious optimism. Woods says he shares that optimism, and it sounds like he means it.

“I didn’t know what to expect this year,” he said. “I didn’t know if I would even be able to play the Tour consistently or I’d be relegated to just hanging on the sidelines and watching from TV or maybe just playing one tournament a quarter or something like that.”

That’s not to say the comeback tour has been called off, nor even put on hold. Not at the biggest non-major of the year, and particularly not playing alongside Rickie Fowler and Phil Mickelson. Woods was asked about Mickelson, who had thrown shade his way earlier in the day. The 14-time major champion didn’t back down. “Big picture,” Woods said with a grin. “How many times have we both won on Tour?”

Even better was his reaction to the possibility of a high-stakes, one-on-one match against his longtime rival. “I’m definitely not against that,” Woods said. “We’ll play for whatever makes him uncomfortable.”

There was plenty that was lighthearted about the presser. He relished the chance to poke fun at Golf Channel analyst Brandel Chamblee, who he said makes golf interesting “for people who don’t play the game,” with the implication obvious. And he fielded a question from the back of the room from Patrick Reed, who was in line to give his press conference after Woods.

“Are you going to be wearing the azalea pink on Thursday?” Reed asked.

Woods cracked up. “Whatever the Masters champion is wearing I will wear,” he said.

But there was still far more that was serious and thoughtful than there was joking. That’s how it always is now with Woods, who appears to care more and more about answering questions earnestly, knowing the gravity his words carry across the sporting world. It was with that earnestness that he praised Jason Day’s play during his win last week, and touched on how fun it has been gaining friends like Justin Thomas, and spoke appreciatively of Mickelson’s support during on- and off-course struggles in recent years. He mused on the golf industry, mentioning that the current country club model is “not sustainable,” and reflected on the peak of his own career: “I mean, I played well, I thought well, I putted well,” he said. “I did everything well for, I guess, a few years there.” 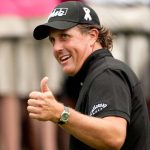 You may also like ‘I don’t know if he wants a piece of me’: Phil hilariously mocks the hype of his marquee pairing with Tiger
And it was that same thoughtfulness that he tackled several questions on LeBron James, Michael Jordan, and transcendent athletic greatness. “You know, I think what M.J. did, getting to the Finals and dominating the league like he did, he did it in a different way than LeBron is doing it, just because of the nature of their body, the build and their game and their mental makeup. But at the end of the day, they both win, and they’re both guys that we look at and say, it’s unbelievable what they’re doing, and they’re just changing the game, the game how it’s played.”

That brings us back to that “big picture” thing, and the man who has changed golf at least as much as Jordan changed hoops, and the reminder that, “fifth major” or not, whatever happens this week will do little to define Woods’s career. “I’m just so thankful to be able to have this opportunity again, because I didn’t know if I would ever have it,” Woods said. “Trust me, I’m fully aware of how special this is for me.”

Of course, if Woods gets in contention on the weekend, context and gratitude and thoughtfulness will all go out the window. We should all be so lucky.