‘Tinder’ for tee times: How golf-club members are using digital networks to partner-up

If you play a lot of golf on the world’s best courses, well, then, lucky you. But unless you log those rounds in the cheerful company of kindred spirits, you haven’t hit the jackpot of good fortune.

At 54, Goel (pronounced Go-yull) has a compact swing, a single-digit index and the relaxed disposition of a man who no longer has to work for a living.

Two years ago, he retired from his role as a tech industry executive and put his mind to an enviable question: how to spend his newfound bounty of free time?

The answer arrived quickly. Goel wanted to play golf, and plenty of it. On great courses. With great people. The people part being the biggest key. As a member of a prominent club on the Monterey Peninsula, Goel didn’t lack for access. But access alone only went so far.

“Very often your pro can get you on the course you want to play, but that’s usually an unaccompanied round,” Goel says. “And I personally find playing unaccompanied to be boring as hell, because I just don’t like my own company that much.” 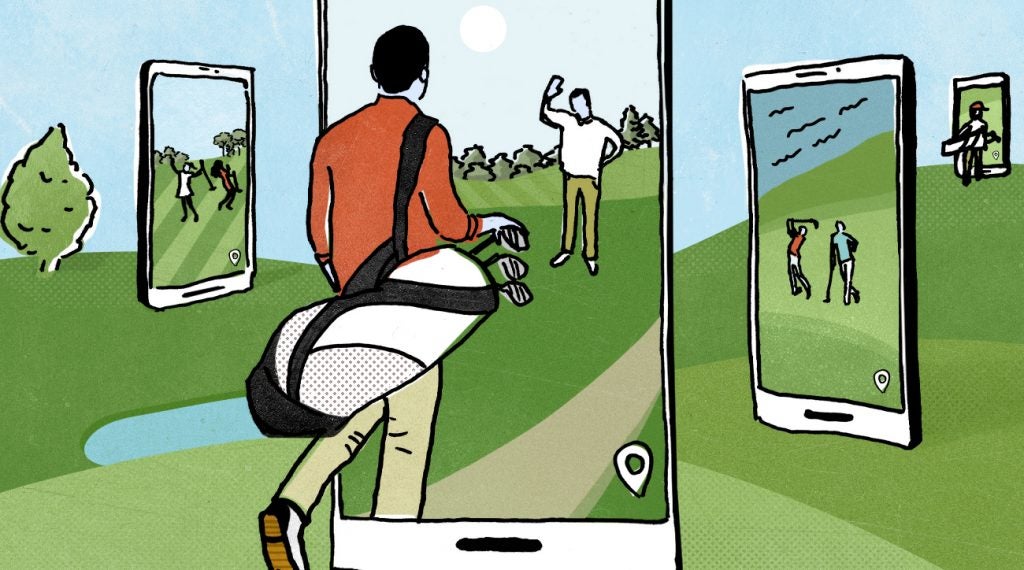 Goel’s solution was to build an online platform that married his interest in on-course camaraderie with the wireless connectivity of the Silicon Valley, where he lives. In April 2017, Thousand Greens was born.

In tech industry-speak, Thousand Greens is a peer-to-peer network, a digital linking of the like-minded. In golf industry-speak, it’s a private network for members of other private clubs who are keen to play one another’s courses, except that it costs nothing: no initiation fee, no annual dues.

In that way, it stands out from a small but growing subset of golf societies — the Outpost Club, the Eden Club, the Eligo Club and the Eighty Club, among them — that offer either access or fellowship or both on many of the world’s top tracks.

Taken together, it’s tempting to see these entities as an internet-age disruption of the country-club model — an end-around onto exclusive grounds. But Goel says the idea isn’t to upend but to expedite a service that country clubs have long provided, often inefficiently, through communications from one pro shop to another.

The analogy he draws is to the automatic teller machine.

“It used to be that taking money out was a pain because you had to rely on the bank hours, go to your local branch and stand in line,” Goel says. “With the advent of the ATM, you could get your money anytime you wanted, so for the customer it was fantastic, and for the bank, they were elevating their service at the same time they were reducing the cost of delivering that service. That’s really what we’re trying to do for the game of golf for members of private clubs.”

As with other private clubs, Thousand Greens has a barrier to entry: You have to belong to a “highly regarded” club, which, of course, is a highly subjective term. From the outset, Goel defined it as a club on a prominent “Top 100” list. Yet as most golfers know, not all such lists are created equal, and not all clubs on them carry equal cachet. This presented an uneven playing field, which Goel recognized as a potential problem.

“Without the right design, people would join the network simply as a means of accessing the most highly desirable clubs,” he says. “And that would make it unattractive to members of those clubs who didn’t want to be inundated with an unrealistic level of demand.”

To address this imbalance, Goel refined his membership criteria, categorizing clubs into four tiers of prestige: best in world; best in country; best in state; and best in city. The rule was that, when seeking access to another club, you had to stay within your tier or lower, safeguarding a member of a world-renown club like, say, Prairie Dunes, from being flooded by requests from members of the top club in Peoria.

“The trick was to offer the right level of protection,” Goel says, “without fine-graining it to the point where you basically have a subset of one.”

I’m just pretty crazy when it comes to golf and I like sharing what I have with other people. And what’s blown away my expectations is how many other people out there are willing to share, too.

Before launching Thousand Greens, Goel told his wife that he planned to call his network Tinder for Golfers. He was joking. But the concept quickly proved its sex appeal. From an initial group of around 50, all from Goel’s existing circle of friendship, membership soon doubled, then doubled again. Today, it stands at nearly 1,600 golfers, representing nearly 1,000 clubs in 15 countries.

One of those members, who asked to remain anonymous, is a 29-year-old who plays out of a Boston-area club with a revered Donald Ross design. Since joining Thousand Greens last fall, he has parlayed the network into accompanied guest rounds at several notable Florida courses. He plans to host as many or more rounds in return.

“It doesn’t really matter to me where you belong or if you’re in a lower tier or whatever,” the member said in a phone interview. “I’m just pretty crazy when it comes to golf and I like sharing what I have with other people. And what’s blown away my expectations is how many other people out there are willing to share, too.”

To help ensure that sharing — that members give as much as they receive — Thousand Greens operates on a token system; every time you host a round, you earn a token, and vice versa. It’s a free market, of sorts, under limited regulatory control.

Not surprisingly, there are some clubs at which no amount of tokens can buy a tee time — clubs too rarified even for Thousand Greens’ most elevated tier. Goel calls them “the super clubs,” and he estimates that there are “no fewer than 20 and no more than 40 in the world,” including fortress-like retreats like Augusta National and Cypress Point. Members of “super clubs” are free to join Thousand Greens, and some have, but for guest-play purposes, they offer up other courses to which they belong.

“There will always be clubs that a model of this nature will never appeal, simply because of the way they consider their privacy or exclusivity,” Goel says. “But that’s okay, because at a certain level, the way we think of Thousand Greens is as a network of willing members at willing clubs.”

Most clubs meet that definition. Over the last two years, only one has asked to be removed from the Thousand Greens network; Goel obliged.

Just as Thousand Greens guards the privacy of clubs, it also protects the privacy of members. The roster is kept anonymous, with names and club affiliations revealed only after a host has fielded a request. As part of the arrangement, guests are expected to cover all fees and to comport themselves according to host club rules.

Not that Thousand Greens attracts a lot of Al Czerviks. More common are scofflaws who attempt to join the network by pretending to belong to a Top 100 club. The antidote to that is a simple background check.

“Any time you create a system, there are always going to be people trying to game the system,” Goel says. “But validating information isn’t difficult. We can check [the handicap network] GHIN. We can ask them to send us proof of membership from their club.”

The allure of such clubs has given rise to a familiar species in the golf kingdom: the list chaser, collecting rounds on marquee courses like trophies in a case. Nothing says that list-chasers are bad people, or unpleasant playing partners. Goel just doesn’t see himself as one of them. Nor does he view list-chasing as the raison d’etre of Thousand Greens.

What has come as something of a surprise to him is the number of golfers who fall into his camp. The rapid growth of Thousand Greens has prompted Goel to reassess the prospects for what he first envisioned as a network with relatively modest reach. If membership continues swelling as he now projects, Thousand Greens might evolve into Ten Thousand Greens, with local chapters in this country and overseas. Carefully chosen sponsors could come into the picture, along with high-end events and outings. As more and more rounds are logged through the network, Goel sees the potential for collecting data that could help him further fine-tune his tier system: a kind of ranking-within-a-ranking of desirability, based on the demand for different clubs.

There are so many courses, and so little time. Goel would like to have enough time to play them all.

Just not on his own.

“The idea of just checking marking a box to say, ‘I have played that club’ is simply not of that much interest to me,” he says. “I’ve played golf by myself enough times in my life to know that if that’s my option, I would probably rather not play at all.”