Wall-to-Wall Equipment: Tiger Woods’s latest club change was made with Mexico in mind 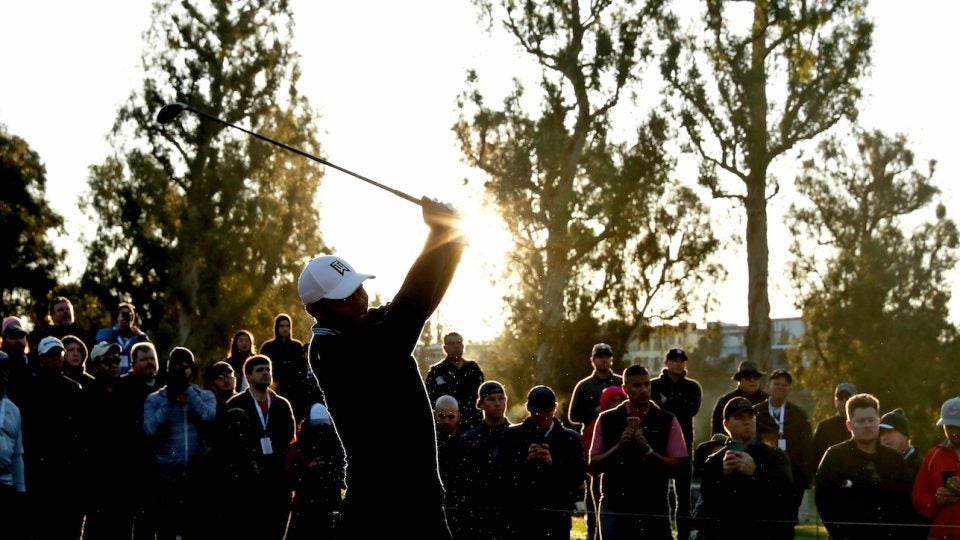 Tiger Woods's latest 3-wood alteration was made for the WGC-Mexico Championship.
Getty Images

The air up there

At nearly 8,000 feet above sea level, the significant change in elevation will force players in the WGC-Mexico Championship field at Club de Golf Chapultepec to calculate new yardages for every club in the bag to account for the thin air, which adds roughly 10 percent more carry at altitude. For Tiger Woods, that meant breaking in a new TaylorMade M5 3-wood at the Genesis Open that’ll likely see a lot of use in Mexico.

With a few significant elevation changes, Woods felt Riviera Country Club was the perfect site to use the 15-degree M5 3-wood, which has two degrees more loft than the 13-degree M5 that was part of his setup at the Farmers Insurance Open.

Considering even players who don’t hit it over 300 yards on a regular basis will feel like Dustin Johnson this week, accuracy takes on a higher priority. For Woods, that meant finding a way to get the ball in the air with additional carry and have it land softly.

And while it wasn’t in the bag at the Genesis Open, keep an eye out for the TaylorMade P760 2-iron Woods has reportedly been testing behind the scenes. It could be a viable option for Club de Golf Chapultepec’s tree-lined layout and tight landing areas.

Two weeks after he credited Bryson DeChambeau with his decision to use a 43-inch arm-lock PLD Anser Tri-Sole putter in Phoenix, Bubba Watson was seen working with DeChambeau on the practice green at Riviera to get a better idea of how the ball was launching at impact with his new stroke.

“The only thing I’ve really worked hard on is putting, and I’m trying this, I don’t know what you call it, I love Bryson so much, I’m just trying to be like Bryson,” Watson said.

Ranked 115th in strokes gained: putting during the 2018 season, Watson felt it was time to mix things up and get outside of his comfort zone on the greens in an effort to improve the one area of his game that’s lagged behind at times during his career.

Bubba Watson switched to @PingTour Sigma 2 Arna with a 21-inch grip at 43 inches/5 degrees of loft. Sticking with arm lock this week. pic.twitter.com/EEJwL5sm7v

“I’m looking at it, I’m trying it, I’m dabbling with it,” Watson said of the arm-lock method. “Next week I might not putt that way. I mean, I can change at any minute. So for me it’s just learning something to see if it does help me one percent. If it helps me get one percent better, then I’m better.”

Watson finished T4 at the Waste Management Phoenix Open despite losing 1.363 strokes on the greens with arm-lock but remained determined to figure it out with DeChambeau’s guidance — and some additional work with Ping’s Tour reps.

Watson continued to test the PLD Anser Tri-Sole (5 degrees of loft, 1 degree flat and 365 grams total head weight) he used in Phoenix, along with a Sigma 2 Arna Stealth mallet that ultimately received the nod for the first round. The mallet was outfitted with a 21-inch Ping grip that allows the putter shaft to rest against his forearm during the stroke.

Switching to a mallet head shape produced a positive week for Watson on the greens, who finished T15 and ranked 24th in strokes gained: putting (plus-2.714) with the arm-lock method.

Before TaylorMade’s P730 irons were a retail option, they were in Rory McIlroy’s bag under the name “Rors•Proto.” McIlory used the proto version going back to when he first signed with TaylorMade midway through 2017, but when the calendar turned to 2019, the four-time major winner chose to go in a different direction.

Instead of requesting another set with the Proto badging, McIlroy received irons with P730 stamped on the head that looks identical to the retail offering. According to Tomo Bystedt, TaylorMade’s senior director of metalwoods, who oversaw the creation of P730, the new sticks are identical, in terms of shaping and grind, to what McIlroy’s been playing for almost two years.

“We created the P730 with the final feedback from Rory with the RORS•PROTO so the irons are essentially the same from a shaping perspective,” Bystedt said.

According to John Oldenburg, the company’s chief product officer, OLYSS RSC utilizes “a constant taper physical profile that gives the prototype a feel of smooth, controlled loading and release.” With a mid-stiff tip section, the prototype will yield a low-mid ball flight with low spin for golfers with moderate to high ball speeds.

More from Oldenburg: “The shaft incorporates a unique, high-tech, composite material in the grip end of the shaft. This new, never before used material, is an ultra-lightweight, thin ply composite weave combining high modulus graphite with Zylon fibers. The combination of the stiff, high strength carbon fibers with lightweight, ultra-strong, high damping Zylon provides the shaft with significantly increased stability in the hands and outstanding feel at impact.

“The rearward placement of the new material also aids to counterbalance the shaft, making it perfect for today’s heavier driver heads. The prototype gives the modern bomber the stiffness and stability they need with tremendous feel, a smooth load and release, and an optimized low-mid launch, low spin launch profile.”

New putter shaft designs have been popping up on tour over the last several months as manufacturers attempt to find an edge with a piece of equipment that’s remained almost unchanged for decades. Recent offerings have centered around tip-stiff, multi-material designs that improve stability, and lightweight profiles to boost Moment of Inertia (MOI).

KBS’s new prototype — only eight were brought to Riviera — features a .580-inch diameter handle and midsection that steps down to a .370-inch tip section. The step is extremely noticeable and gives the shaft a softer, more responsive feel at impact.

First week out on Tour for @KBSGolfShafts prototype putter shaft. Consists of .580 handle/mid section with a heavy step down to .370 tip. Supposed to make the tip section more active. pic.twitter.com/qPfT3xKh3a

“We’re just trying to see what works,” said shaft designer Kim Braly. “From the feedback we’ve received, some players have said the feel is even softer than we anticipated. We’ll probably change the step location to see how it affects the feel and performance. It’s very much a work in progress.”

J.B. Holmes came from behind to win the Genesis Open with a Scotty Cameron 009M putter that helped him lead the field in strokes gained: putting for the week. Those familiar with Jordan Spieth’s Scotty Cameron have likely heard of the 009 before. The Tour-only version has a flatter, sharper topline and edges than the retail Newport, with a carbon steel head material that isn’t offered to the average golfer.

So what’s the difference between Spieth’s 009 and Holmes’ 009M. Back in 2016, Cameron chose to give the 009 a makeover, adding a slight bevel to the topline to give it a thinner appearance. The edges were also softened and the sole given 1-degree more roll than its predecessor. The changes likely wouldn’t be picked up by the average golfer unless you put the two putters side-by-side and studied them carefully, but there is a difference between the 009 and 009M.