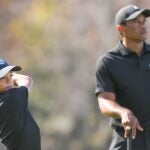 Charlie Woods and Tiger Woods on Friday during a pro-am for the PNC Championship.

“Oh, that’s awesome,” said Woods during the video — of him watching a video.

Like father, like son. But, as Woods confessed Friday, maybe even more spectacular is where Charlie is unlike dad.

After his pro-am at this year’s PNC, where the elder Woods will be playing his first competitive golf since his car crash in late February, he was asked of his and his son’s mannerisms. And while similar, it wouldn’t quite be the same if you dialed it back, say, 33 years ago. To when Woods was 12, or Charlie’s age.

“Well, I didn’t have speed like that at that age,” Woods said. “I was probably a little bit taller than Charlie is at that same age. I was skinny as a rail. I looked like a 1-iron. The way we move, the way we push off or — sorry, the way he pushes off, or how I used to push off, very similar.

“But that’s what is neat about this event. You look at the history of the event and you look at mannerisms of the father and the child — to me, the best of all time is watching the Stadlers play. I mean, that’s just the absolute best: The frustrations, the enjoyment, the cup throws, everything about it, that was the best.

Notably, a year ago at the parent-child PNC, not only did the younger Woods make his television debut, but the elder Woods played in his last event before first back surgery, then the crash. Tiger Woods was also asked about the timeline of his return and “how much of that was because Charlie wanted to or because of the unique tournament that it is.”

“I think it’s just being able to have the bonding experience of being out there with Charlie,” Woods said. “Unfortunately this year has been very hard, and I haven’t been able to play at all until — this would be probably my second or third round this year. It’s been a long year. But just the fact that I’m able to play and have this experience with him and watch him, watch him hit shots or encourage him to hit shots, where to think — that’s one thing I can do, I can think my way around the golf course.

“I may not be able to execute it, but I can help strategize some of his shots, how to hit it, things of that nature and make sure that he’s in his little bubble and he’s having fun.”