‘This is a massive miscue:’ Pro hits eagle putt into the water at the Masters 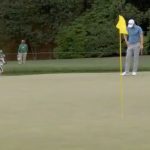 Bernd Wiesberger watches his eagle putt slide by the hole on the 15th hole at Augusta National on Thursday.

Bernd Wiesberger, during Thursday’s first round of the Masters, hit his 43-foot putt for eagle on the 530-yard, par-5 15th at Augusta National 43 feet.

Plus nearly another 43 feet.

Wiesberger, two over at the time, putted, stood up, then put his right hand on his hip and lowered his head. He had putted neither left enough nor slow enough. As his ball came within a few feet of the cup, it was already off line and gaining speed.

It would roll 42 more feet and into the water that fronts the green.

“Oh look at this,” an announcer said on the broadcast. “This is a massive miscue.”

Wiesberger would drop from where he putted and try again. From putting for eagle to putting for par. He hit putt two, and stroke five, to within four feet, and he’d make the bogey 6.

A little while later, Shane Lowry, from behind the green on 15, chipped his ball past and into the drink. All of which begs the question: Just how fast were those greens out there?

“This is about as fast as I’ve seen it,” Ian Woosnam said after his round.