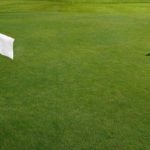 Two holes on every green would help golfers social distance.

With the goal of bringing back golf to the masses in the U.K., the R&A has apparently cooked up a long list of measures golfers and golf courses will need to take to reboot the game in a safe and responsible manner.

According to a draft of an R&A document procured by Bunkered, those precautions would include playing in twosomes, prohibiting golfers from picking up stray balls, one-golfer limits in pro shops, plus a slew of other measures that already are in play at many U.S. courses (no bunker rakes, caddies or foursomes — twosomes only).

It’s a highly sensible list, and one to which golfers and courses on our side of the pond would be wise to subscribe. It also got me thinking about one other measure that courses ought to consider: cutting two holes on every green.

Two days before golf courses were shuttered in my home state of New Jersey — this was about six weeks ago — I played 12 holes at a club in my town with a couple of friends. Social distancing was already a thing. The pro shop and clubhouse were closed. Bunker rakes had been pulled. Keeping a safe distance from one another was mostly no trouble, but in retrospect, it’s likely my golfing comrades and I occasionally violated the six-foot rule on the greens.

The closer our balls got to the hole, the closer we all got to one another. Among the R&A’s proposals for when golf returns is continuous putting, meaning keep putting until you hole out. Make senses, but here’s another solution that’s even more fail safe: cut two holes on every green. Two-hole greens would be a natural extension of yet another of the R&A’s suggestions: two sets of tees on every hole that would “provide an equal challenge over a round.”

Why not take that precaution a step further and have a yellow and green flagstick on every green, with at least 15 feet between each, or even 50 feet? On rare occasions when the “other” hole inhibited a player’s putting line, the player would be permitted to move his or her ball one club-length no closer to the hole.

Pin positions can, of course, dramatically influence the difficulty of a hole — a front-left hole on one green, for example, might be far more accessible than a back-right location — but if grounds crews are mindful, they could easily keep the playing field equitable, i.e., an easier green-flag location on the 1st green would be followed by a more difficult location on the 2nd green, and so on, and vice versa for yellow-flag holes.

Drastic? I don’t think so. Whatever measures golf needs to take to get golfers safely back on courses are measures worth taking.

What are Tom Brady's nine takeaways from The Match II?

How is the coronavirus changing golf's future?