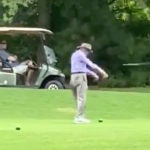 Dr. Lemack, a 102-year-old friend of longtime PGA Tour pro Steve Elkington, was a bit angered after a recent shot.

Dr. Lemack takes a warmup swing and holds the pose. He squares himself to the ball. He takes a look up at his target. He likes it.

He swings. He does not like it. At all.

“Everyone knows golf is hard … Even Dr Lemack at 102 yrs young is still looking for the magic….” tweeted Steve Elkington, the 1995 PGA Championship winner, this week under a video of Lemack’s toss.

Lemack’s anger is justified, at least based on previous videos Elkington has tweeted.

The two have been friends for a while. Most, if not all, of the videos were shot at Champions Golf Club in Houston, which hosted the 1967 Ryder Cup and the 1969 U.S. Open. “Doc” stripes the ball in each.

This year, on April 17, a day before his 102nd birthday, he drops about a 15-footer on a practice green.

“Nice, Doc,” Elkington said after Lemack hit his driver in the video four years ago. “Pretty good for …”

“For an old guy,” Lemack continued.

In good shots and bad.