The U.S. Open leaderboard has a handy new feature — keep an eye on it on Sunday. 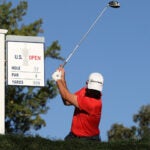 It’s U.S. Open Sunday, an annual tradition in golf that for a moment, we weren’t sure we were going to get this year. But thankfully, it’s here, an the anticipation of who will lift the trophy at Winged Foot is heightening with each moment.

Who will win? We’ll have to wait and see, but in the meantime, a quick public service announcement to help you make sense of it all:

Go to the U.S. Open leaderboard and click on a player’s name. You’ll be presented with a bunch of interesting stats and scores. But over on the right side of the dropdown you’ll see a handy “win probability” feature.

There’s a little slider which says “vs Leaders” which, as you might, tracks your selected players’ chance against the players around him.

The probabilities updates after each hole, and there are two trackers operating at the same time: A top 10 tracker, and a win probability tracker.

Coming into Sunday, the tracker showed Wolff had more than a 46 percent chance to win.

Bryson, by contrast, has a nearly 28 percent chance to win.

Something to keep an eye throughout the day as the action unfolds.