The Social 7: Tiger vs. the rulebook, goodbye Mr. President, clubs for a cause and more 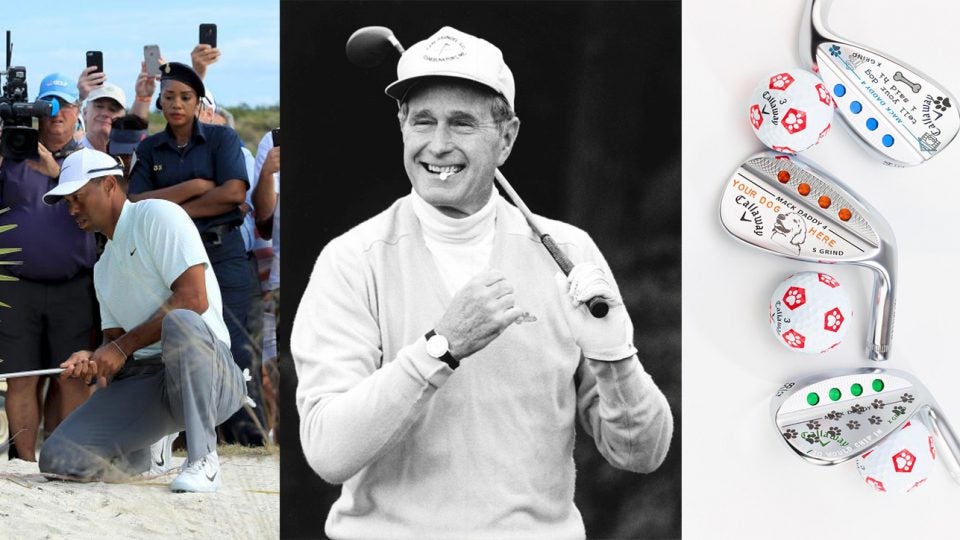 Tiger took on the rules, we said goodbye to a president and avid golfer and Callaway's clubs for a cause were a few things that created buzz on social media.

1. Tiger Woods found himself in a position I’ve been in more times than I’d like to admit. He left himself a nearly unplayable lie that didn’t allow a swing to get the ball back in play. So, Tiger went with the old shovel method instead. This situation would spark everyone’s favorite debate — a rules debate!

Woods would go on to finish the Hero in 17th place. Does that still count as a top-20 finish when the field was only 18 deep?

"If the player did not know that he did that and the only way you can tell that is by using this type of slow-motion technology, he’s exempt from the rules."

Video, explanation and analysis of Tiger Woods' ruling today from the plant: https://t.co/04SWXPSj9K

2. The world lost the 41st President and avid golfer over the weekend. George H. W. Bush passed away at age 94. Upon receiving the Bobby Jones award in 2007, Bush was asked what the game meant to him: “It means friendship, integrity and character.”

“Golf has meant a lot to me. It means friendship, integrity and character." George H.W. Bush, the son and grandson of USGA presidents, and the 2008 Bob Jones Award winner, carried on his family's strong legacy in the game. https://t.co/mlLJtrvt4E pic.twitter.com/98X9cj0Ass

3. Anne van Dam is a 23-year-old Dutch professional golfer whose swing was the talk of Twitter last week. After posting a video from her winter workout, swing experts everywhere began drooling over her mechanics. I’m no expert, but van Dam’s swing looks pretttty, pretttty good.

If you think her swing makes golf look easy, mine will remind you how hard the game is.

4. Jon Rahm made a statement at the Hero. No, I’m not talking about his dominant performance on the course. With his fiancé, Kelley Cahill, in attendance, we got a glimpse at the engagement ring. That rock is nearly the same size as the TaylorMade TP5X ball Rahm plays.  With the holiday season upon us, a “Rings by Rahm” jewelry store could clean up.

Jon Rahm leads the Hero World Challenge, but what really caught our eye was his taste in engagement rings 💍😮

5. Golf dogs are the best dogs. That’s just a fact. Callaway golf’s wedge art specialist Anthony Taranto whipped up a few dog-themed Tour limited wedges in partnership with We Rate Dogs to help raise money for K9s For Warriors. These clubs are almost as good as the good dogs whose likeness are featured on the wedges. Kudos to all parties involved. Now go make a bid!

BID NOW and this ultra-custom @dog_rates inspired wedge set could be yours >> https://t.co/Okm9DWYt3O

All proceeds from winning bid will be donated to @k9sforwarriors, and the winner gets their dog’s picture custom lasered on the third wedge. pic.twitter.com/KCbLAhxe5B

6. In the most bizarre scene of the week, John Senden’s shaft broke mid-swing while playing in the Australian PGA Championship. This is the first time I’ve ever seen this happen, and it’s now my biggest nightmare. Let’s break this down once more:

– He’s driverless for the remainder of the round.

– The broken shaft hurts his hand.

– This somehow still counted as a stroke.

Have you ever seen a driver snap mid-swing?

Never seen anything like what just happened to John Senden in Australia. His shaft snapped inside his grip as he started his downswing. Lucky he didn't slice his hand open. And then a long rules discussion. pic.twitter.com/UamVAfviEG

7. Club Pro Guy is social media’s favorite certified teaching pro. Where exactly did he receive his certification from? Chalk that up under don’t ask, don’t tell.

At one point or another, we’ve all been stuck behind an elderly golfer that struggled with pace of play. Fortunately, CPG is doing the Lord’s work and preaching change one student at a time.

Working with our senior net club champion on 1) Taking more time over the ball and 2) Getting to more of a “full” finish position. Results like this is why I do what I do. pic.twitter.com/As5Py0e7Ou