The Open 2019: What would a 15-handicap have shot at Royal Portrush in Sunday’s squall?

The rain came hard and fast on Sunday at the 2019 Open Championship. So did the wind.

The R&A saw it coming and took some drastic measures to keep the course from becoming unplayable. They moved up the tee times and slowed down the greens. Still, players struggled.

“The weather is testing players to the very limit,” Graeme McDowell said.

“It will be carnage,” predicted Tyrrell Hatton after walking off the course with an impressive 69.

He was right. The scoring average for the final six groups was 75.41, and J.B. Holmes, playing in the second-to-last group, shot 86. Combined, the final seven groups played the course in 64 over par. 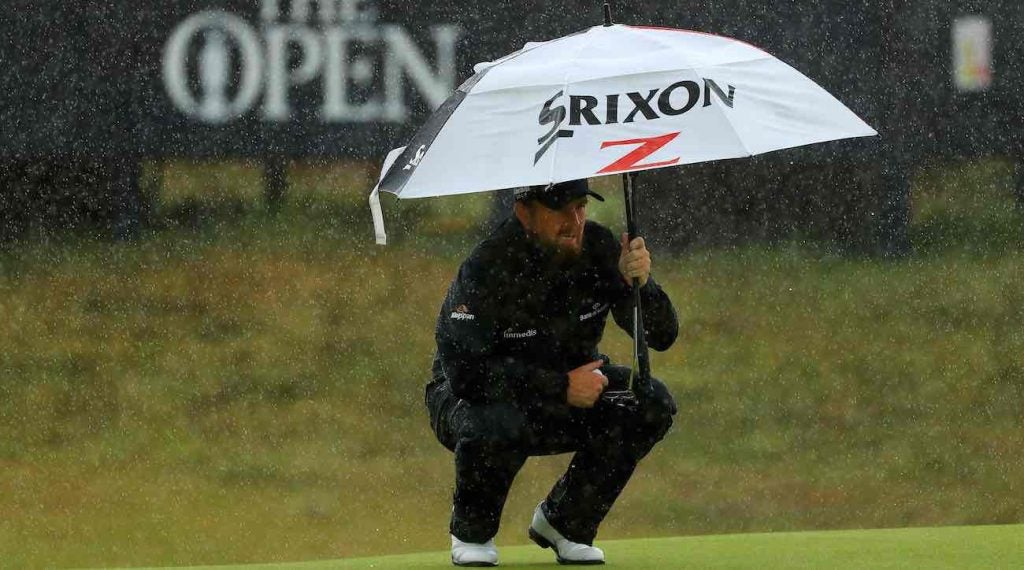 Watching the pros bleed shot after shot made us wonder: What would a 15 handicap shoot out there?

The greens are pretty manageable — they were rolling at about a nine — so putting wouldn’t be as big a problem as one might expect. The issue would be from tee-to-green. Few 15 handicaps have the control required to navigate sustained winds at 20 mph (at at times reaching 35 mph).

Trying to hit fairways would be a nightmare. They’d be hacking out all day, and once they do get close enough to the green, they’d see how the surfaces severely run off into valleys. Heavy rain on-and-off throughout the day, means they’d never get into a rhythm. Not to mention the course stretches to more than 7,300 yards.

A moment Shane Lowry and Ireland will never forget! pic.twitter.com/9atCLBD2sT

First, I wanted to hear what our resident 16 handicap, Josh Berhow, thinks.

What would I shoot at Royal Portrush today? Man, I don’t even want to think about that. I’m a 16 handicap who doesn’t play as much golf as I’d like to, and here’s the brutal truth about the majority of fellow 16s like myself:

2. We aren’t consistent. Shanked irons and thinned wedges can pop up at any turn.

3. We don’t play smart. Part of that is the mentality of, “Hey, I’m not gonna set the course record today, so who cares?”

That said, luckily for me I’m blessed (?) with an extremely low ball flight (take that, Irish wind!) and hit my 3-wood and hybrid better than anything in the bag, so my optimistic side believes I could find some fairways, work my way to the green and mix in some decent numbers.

So after some thorough thought, careful to give myself a little credit without being too optimistic, I’ll settle on a 128.

Pretty honest and brutal assessment from Josh there. But what do players think?

“They definitely wouldn’t break 100,” Russell Knox said after an eight-bogey 77.

Added Cameron Smith after his 76, “If they were counting every shot, I’m not sure they would finish today if I’m being honest.”

So according to my highly unscientific poll, the consensus seems to be hovering around 120, which sounds about right. But what do you think?

Final seven groups played the course in 64 over-par. What would a 15 handicap shoot if they played Royal Portrush today?