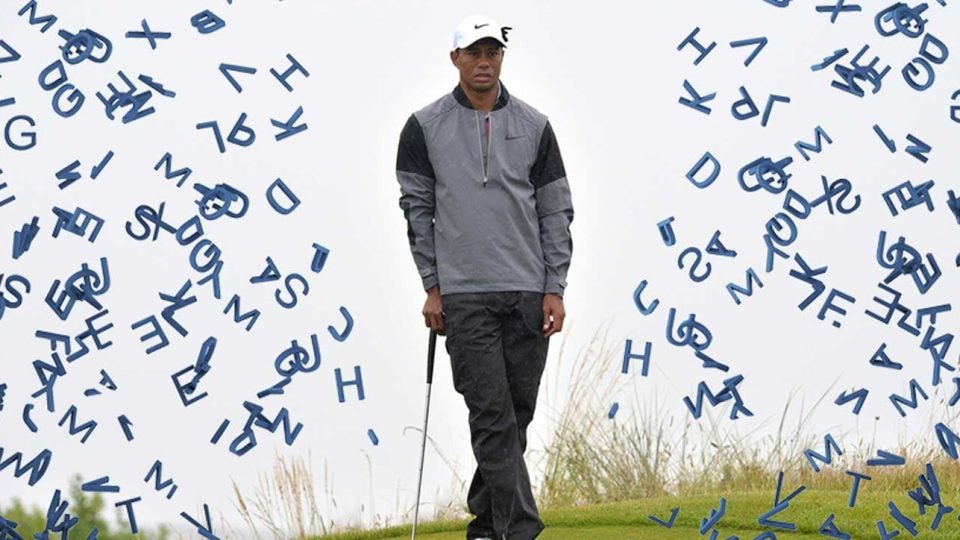 It's time we take a look at the words that define this game.
Getty Images

Patron is an official word of the Augusta National Golf Club, but that doesn’t mean the rest of us have to use it. Fan is my preferred noun. The USGA is trying to pull the plug on halved and replace it with tie. That won’t happen. Tie carries no emotion. When you and an opponent halve a hole, it’s personal. The choices we make, both in written golf and spoken golf, are personal.

Tournaments
As a European golf fan, I’m terrified about the 2024 Ryder Cup

Ace is a fine golf word. Mulligan is cheesy but entrenched. I dislike Tour, with the tall T, but that battle is over and the trademark lawyers won. It complicates things. Al Czervik was not playing Bushwood C.C. with a Tour bag. Nobody uses touring pros anymore because the pros jet from one far-flung place to the next with a stop at home in between. Languages must evolve. But 3-metal will always sound ridiculous. Wood is now a shape, not a material.

If you never hear anybody using your pet word, give it up. On that basis, I have retired singleton, for a golfer playing alone. But I’m holding on to Mongolian Reversal because Fred Couples uses it, too. (Example: When the guy who drove it short and in the hay wins the hole over the guy who mashed it down the middle.) Does anybody refer to the clubhouse bar as the 19th hole? Maybe some hipster in a ski cap in Asbury Park, tongue in cheek.

The USGA, in the new-for-’19 rulebook, has cut all references to dormie. Good riddance. I never felt secure about using the word, even after reading up on its French roots. (From dormir, to sleep.) Caddie is also from the French (cadet) and generally is best as a six-letter word, though a movie called Caddieshack would have died on the vine.

Curtis Strange is the best of our American TV golf talkers, but his headphoned overlords require him to use flagstick and not pin. That must be hard for Curtis, since he’s folded so many pin sheets into so many yardage books. Pin is descriptive, unless you’ve never seen an army general’s wall map in a World War II movie. Still, flagstick is fine for the rulebook. There’s a par 5 between how we speak and how we write.

Yes, a par 5. Not a 5 par. Blech. Also grating is three-shotter, two-shotter and one-shotter. And who needs the new penalty area when hazard conveyed it all? As Strunk & White say in Elements of Style, “Be clear.” That doesn’t mean be literal. Golf requires a measure of irony, which is why any body of water, including a gunky Ohio pond on a pitch-shot par 3, may be referred to as a lake. Here are the exceptions that prove the rule: the ocean to the left of 18 at Pebble and the burn crossing the first on the Old Course. Show some respect: Swilcan Burn is not a lake.

Allow for regional preferences. What the Scots call a bunker, Texans call a trap. The rest of us don’t have to make a long-term commitment to either word. I liked medal play, common now only in the British Isles. Its replacement, stroke play, is less evocative but simpler. I hope its rise doesn’t come at the expense of medalist, even though the awarding of medals at club events is rare these days. (Everybody wants shop credit.) Along those same lines, alternate shot is preferable to foursomes. We’re not trying to scare people away here. For the newly arrived, you’ll know a three-finger cut shot when you see it.

These terms are pretentious and should be avoided: hole location, green complex, signature hole, double cross, overseeding, C.O.R., learning center, practice tee, links-style, second-shot course, Championship Course. Traj. Also: to cover. (“He’s got 210 to cover.”) While we’re at it: Mr. Hogan, Mr. Palmer, etc. If you’re almost 10 and want Big Jack’s autograph, yes, Mr. Nicklaus is fine and appropriate. But if you’re at the bar and talking about Hogan, just say Hogan. I once heard Tiger refer to him as Ben and some graybeards-in-training started clearing their throats. Please. We’re all just human beings on this green earth trying to get a small ball into a distant hole. Sunday at Augusta, Tiger recalled “Arnold” blowing the ’61 tournament, and it was wonderful.

The first job of language is to share information. With that in mind, avoid barranca, as it raises more questions than it answers. Ditch, happily, does not. And if you want to know about another golfer, don’t ask for his handicap. Try this instead: What can he shoot?