The Mysterious Matsuyama: Japan’s star is a force on the course but what’s he like off it? 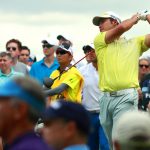 Hideki Matsuyama at the 2017 PGA Championship.

“He drinks a lot of it,” a reporter for a Japanese news agency told me Saturday afternoon as I was on a mini-quest to learn more about what the mysterious Matsuyama is like off the course. The drink is part of his heritage. Matsuyama’s birthplace of Matsuyama (nothing more than a weird coincidence, apparently), a five-hour drive southwest of Kyoto, is renowned for its rice wine.

At the Tournament of Champions in Maui earlier this year, Matsuyama was asked about what was the most fun thing he did during his short off-season.

“Probably drinking sake,” he said through his interpreter.

So Hideki likes his sake. But, gosh, we know so little else about the world’s No. 3-ranked golfer, who after three rounds of the 99th PGA Championship here in sweaty Charlotte is one stroke off the lead, in excellent position to claim his first of what most pundits believe will be multiple major titles.

O.K., now this is something we can talk about.

“He has the greatest passion for golf that I’ve seen since Seve,” Bob Turner said as he followed Matsuyama along the second hole Saturday. Turner is Matsuyama’s manager, interpreter and general fix-it man, a role he previously filled for three-time PGA Tour winner Shikegi Maruyama and, before that, Joe Ozaki (younger brother of Jumbo), who won 32 times in Japan and made 185 starts on the PGA Tour. Turner, whose wife, Hiroko, is Japanese, studied at a Japanese university. After graduating he employed his talents to start a business helping Japanese athletes — baseball great Ichiro Suzuki would become one of his clients — acclimate to life in the United States. (Turner has also assisted European and American golfers, including Seve Ballesteros and Tiger Woods, when they’ve played in Japan.) “We do everything,” Turner said Saturday. “Housing, transportation, dinner reservations.”

Turner has been at Matsuyama’s side since his first Masters appearance, as an amateur in 2011. He has had a front-row seat to the 25-year-old’s precipitous rise, one fueled by a relentless desire to improve. Golf cannot be perfected but don’t try to tell Matsuyama that. At home in Orlando, where he lives in a gated community, he spends virtually every day on the course, the practice range and in the gym. “He sets a very high standard for himself,” Turner said. Never is that more obvious than when Matsuyama follows a seemingly hammered drive or flushed iron with a club-release and a look of utter disgust. Tough to please? Try impossible.

After a seven-under, tournament-tying-low 64 in the second round of this PGA, Matsuyama said he couldn’t possibly count all the bad shots he had hit. In the third round Saturday Matsuyama posted an admittedly shaky 73, but he wasn’t in a hurry to emphasize the positives of still being only a shot off the lead with 18 to play. “The worries that I had about my swing showed up today,” he said. At 8:15 Saturday evening, in suffocating humidity, Matsuyama wasn’t kicking back with a sweet tea in the air conditioning. He was on the practice green hitting one-handed putts.

The scene called to mind the 2013 U.S. Open at Merion, where in dreadful conditions Matsuyama fired a final-round 67 to notch his first top-10 finish in a major. He rewarded himself by repairing to the range for a two-hour practice season.

Who is this guy, you’re thinking.

There must be more to him. An epic stamp collection, perhaps? A Taylor Swift obsession? A hidden yodeling talent?

“There’s not much,” Turner said with a smile as he bid me farewell by the 3rd tee. “That’s just who he is.”

Turner wasn’t being coy. At that press conference in Maui, Matsuyama was asked to describe his perfect day off the golf course.

“There’s not that many days that I’m not playing golf,” he demurred, “so I don’t know.”

“He has the greatest passion for golf that I’ve seen since Seve.”

The writer followed up: “Have you done any Maui type of things, like go to the ocean, wind surf, anything like that, surfing, paddling?”

At the Tour Championship last year, Matsuyama was asked what would be the first thing he’d buy if he won the $10 million playoff bonus?

American reporters aren’t the only ones who struggle to unlock the Matsuyama mystery.

“He’s really, really shy,” Eiko Oizumi, a writer and photographer for Golf Today Japan, said as she was following Matsuyama up the 5th hole Saturday.

She had company. A pack of reporters, photographers and camera operators representing various Japanese media outlets paced the fairways with her, as they always do when Matsuyama is in the field. Kakomi is the Japanese word — press scrum. Depending on the prestige of the tournament and Matsuyama’s place on the leaderboard the group can include as few as two or three journalists or as many as 20 or more. Their charge is to chronicle Matsuyama’s every move inside the ropes and transmit those dispatches and images back to his legion of fans across the Pacific, where with every bombed tee shot and Tour title (he already has five on the PGA Tour, including a pair of WGC crowns) the Matsuyama legend grows.

“He doesn’t want to show his private life,” Oizumi continued, adding that Japanese reporters are reluctant to ask him questions about his off-course pursuits for fear of making him uncomfortable.

Of the media scrum that shadows him, Matsuyama observed recently: “They are doing their job. But in other ways, too, sometimes it’s good if not too many come, if that makes sense.”

Reiko Takekawa, a Japanese golf writer based in California, has been covering golfers from her homeland for nearly two decades. She said that the ever-flashy Ryo Ishikawa is still the most popular player in Japan — she likened him to the “Rickie Fowler of Japan” — but that Matsuyama’s stock is surging and with that comes a responsibility to lower his guard and feed the public’s interest in him.

“Once he wins a major it’s all going to change,” she said.

If it happens Sunday at Quail Hollow, we may not know much about the new champ, but we may just learn something about the Wanamaker Trophy: how much sake it can hold.