The controversial side-by-side picture of Tiger and Rory’s drives, explained by experts 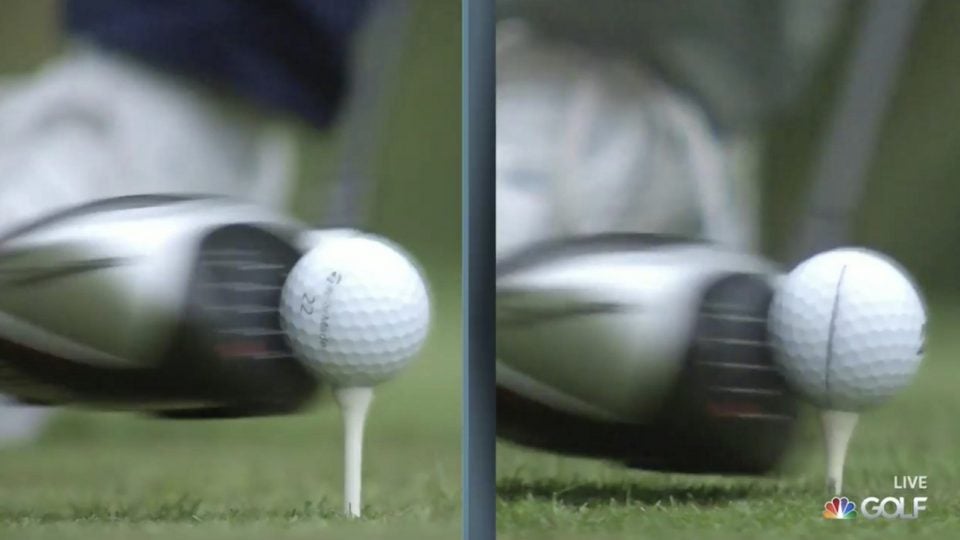 If you were, like most golf fans, watching the Tiger Woods and Rory McIlroy match during the WGC-Dell Match Play Championship over the weekend, you may have noticed an interesting freeze-frame from the telecast: A side-by-side of Rory McIlroy and Tiger Woods’ clubhead’s respective impact positions.

My friend and GOLF.com Dylan Dethier colleague — sweet, innocent Dylan — tweeted-out the “really cool” picture and, in doing so, set off a feisty debate among avid golf fans.

For reference, here’s ground zero — aka, Dylan’s tweet that started it all…

This was a really cool side-by-side of Rory and Tiger at impact — look how high off the ground Rory's driver is! pic.twitter.com/LIf45zPODN

The picture set off such a passionate debate because it inevitably led to endless fans rushing to interpret the results.

We can tell, looking at this picture, that Rory (on the left) hits the ball lower on the driver face than Tiger’s (right). It also appears that Tiger’s shaft is leaning more toward the target than Rory’s. The conclusion many observers came to is that Tiger Woods hits more down on the ball than Rory McIlroy, which is why Rory is a “World Class Driver of the Golf Ball” and Tiger isn’t.

That might be true, but … it might also be false. Why? Because as many teachers were quick to point out, there are many things you can’t tell from a still picture — like, say, Angle of Attack, which was the sticking point of this debate.

Photo can't see angle we need 3-D as in Trackman. But the average tour players is -1.5 AA. Hitting up is not always best for high speeds.

You can’t see angle of attack in a still picture.

Tiger swings up. It was a mishit. This picture has very little to do with why Rory is longer.

I called one of those teachers up: Rick Silva, one of GOLF.com’s “Teachers to Watch” and a pioneer in the 3D golf space, to help explain why golf fans shouldn’t jump to conclusions when analyzing pictures like this:

“In a still frame like this, you have no idea what that club is actually doing. How it’s moving. Think about it this way: If we were able to become miniature versions of ourselves and ride on top of the golf club as it’s traveling, we would experience all kinds of things. Whether the club is moving forward or back, up or down. When it’s a still frame, we’re not experiencing anything. It’s just a snap in time. When somebody looks at a still picture and asks if the club is moving up or down, the answer is neither, because we just don’t know.”

But, can you look at a picture and make an educated guess about where the club is moving? The short answer is yes, but with some big caveats, Silva says:

“It’s like when you read something but there are words missing. Sometimes your brain can fill-in the gaps enough for you to somewhat understand what’s happening. That’s human nature. But we’re human beings, and we’re not always good at knowing when a picture could be lying to you, or tricking your brain into coming to a false conclusion.”

It’s wonderful insight from Silva, and here’s an example that illustrates it, courtesy of GOLF Top 100 Teacher Andrew Rice.

Many would look at the still picture of this golfer, see his hands so far ahead of the ball, and assume he’s hitting down on the ball. But he’s not! On the contrary: He’s actually hitting 11 degrees up on the ball.

Errr no! You cannot tell angle of attack from a still image. This image from the swing that generated an 11.6 degree ascending blow. #andrewricegolf pic.twitter.com/1qJmL8GWjR

And here are two more examples from the pro ranks: On the left is a picture of Jon Rahm, who was measured on this swing hitting more than five degrees up on the ball despite this still image suggesting otherwise. He’s hitting up on the ball almost six degrees more than the golfer on the right, Xander Schauffle, who was hitting down more than a degree on this swing. So, in short, to understand a golfer’s angle of attack, you have to understand where the low point of a golfer’s downswing is, and which way the club is moving — either toward that low point, or away from it. You may be able look at one picture and make a guess, but there’s no way to definitively tell.