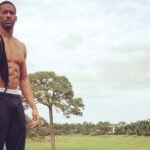 Matt James has made a name for himself recently on The Bachelor, but as host Chris Harrison shared, he's not a very talented golfer.

With a golf resort as the location for this season of ABC’s The Bachelor, golf fans who also happen to be fans of the hit show were hopeful for some crossover. Nemacolin Resort in Farmington, Penn. (one of GOLF’s Top 100 resorts in North America!) plays host to this season, and while there have yet to be any golf scenes on the show, that doesn’t mean the course didn’t get any use during the show’s stay.

In a recent appearance on Golf Channel’s new show Golf Today, The Bachelor host Chris Harrison shared a story about bachelor Matt James that has him in the running for worst golfer ever associated with the show. When Shane Bacon asked who the best golfer who’s ever been on the show was, Harrison was quick in his response.

“I’ll tell you who it’s not, and that’s Matt James,” he said. “We played a lot, and I’ve never seen a golf pro have to actually drive golf balls out to us in the middle of the course because Matt had gone through a solid dozen.”

And while losing a dozen balls in a round is pretty embarrassing, it turns out that the damage was much worse. James responded in a tweet that he’d actually gone through 36 (!) balls in seven holes when he played with Harrison.

“True story; I personally went through 36 balls in 7 holes, my first and last round with @chrisbharrison,” the tweet said.

That’s almost an unheard-of number of balls to lose during a round, but when you consider that Nemacolin’s courses were designed by Pete Dye, it becomes more believable. The legendary course architect hasn’t been known to take it easy on those who play his courses.

Here’s hoping the next time Harrison and James go out for a round, they play somewhere with less potential for lost balls.