The 9 Big Changes At St. Andrews For This Year’s British Open 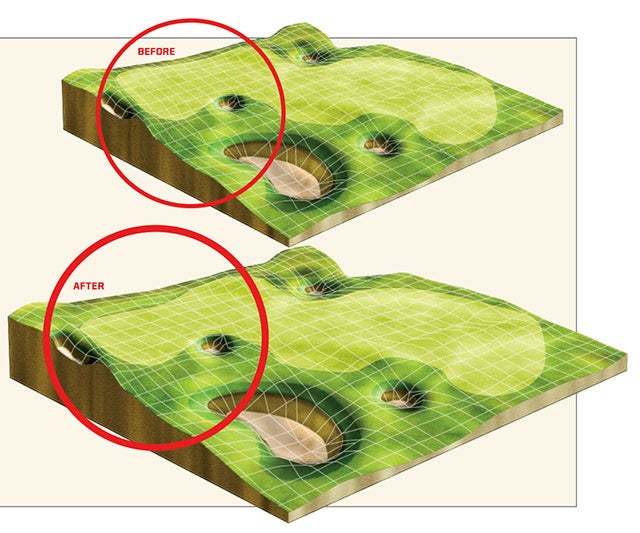 Earth’s most hallowed golf ground, the Old Course at St. Andrews, dates to the 1400s, and this July it will host its 29th British Open, continuing a tradition that began in 1873. Its firm, rippled fairways have roused legends from Old Tom Morris to Tiger Woods and every famous name in between. Ancient riddles of strategy, incomparable history, and a hand-inglove setting in the “Auld Grey Toon” combine to make St. Andrews’s Old Course a singular, sublime links experience. And yet…

If there’s one constant about the Old Course, it’s this: It never stands still. Change—and controversy—is not new at the Old. Ahead of the 2010 British Open, only one hole underwent a transformation, and it antagonized many. A new back tee at the fabled par-4 17th lengthened the Road Hole from 455 to 490 yards and sparked criticism from the likes of Retief Goosen and Bill Coore. That reaction paled compared with the outrage provoked in November 2012 when the St. Andrews Links Trust announced plans to alter no fewer than nine holes, including eight of the 14 par 4s. “Horrified,” was architect Tom Doak’s response at the time. “I have felt for many years that the Old Course was sacred ground to golf architects, as it was to Old Tom Morris, C.B. Macdonald, Harry Colt and Alister MacKenzie before us. It has been untouched architecturally since 1920, and I believe it should remain so.”

On the other hand, Jack Nicklaus, twice an Open winner at St. Andrews, dismissed the hue and cry, stating that the tweaks wouldn’t change the nature of the course. Tiger Woods, also a two-time champion on the Old Course—and who, like Nicklaus, calls St. Andrews his favorite course— was similarly unmoved. Woods told me that he agreed with some of the changes, such as those in the works at the second and ninth holes, but he wouldn’t go as far as endorsing what had been proposed for the 17th. At a 2012 press conference he remarked, “I think 17 is hard enough as it is,” he said. “I don’t think we need to make that bunker any deeper or bigger.”

The thankless task of modifying the Old Course fell to the Royal & Ancient’s go-to architect in recent years, Martin Hawtree, who has made alterations to Royal Birkdale and Royal Liverpool. Hawtree’s charge at the Old Course, according to a press release from then chief executive of the R&A, Peter Dawson, was to “stiffen its defences.”

To put Hawtree’s changes (they were completed early in 2014) into perspective, we enlisted the help of New Zealand architect Scott Macpherson, the author of 2007’s St. Andrews: The Evolution of the Old Course, considered the definitive source in documenting the Old Course’s design journey.

Macpherson concedes the need for preservation, calling the Old Course “an anchor for our game.” Yet he adds that it’s impractical to “wrap the course in plastic,” because improvements in playing technology and the evolving nature of linksland have historically meant that course changes are inevitable. “This means do the least required, not do nothing,” he says.

Did the Links Trust, the R&A and architect Martin Hawtree get it right? Here are Macpherson’s thoughts on the latest changes to the Old Course. Judgment Day will come soon.

THE CHANGES: The two bunkers right and short of the green have been moved closer to the edge of the putting surface, and the ground to the right of the green was recontoured to create more undulation. Two fairway bunkers on the right, near the third championship tee, have been removed.

THE IMPACT: “The two repositioned bunkers will come into play, especially when the hole is cut on the right-hand lower level of the green,” Macpherson says. “I think they’ll increase the premium on an approach shot and will be applauded in the fullness of time.”

THE CHANGES: The first fairway bunker on the right has been removed and a new one carved into the bank on the same side, about 275 yards from the championship tee.

THE IMPACT: Significant, Macpherson says. The old bunker, 216 yards from the back tee, had long been rendered obsolete by equipment advances. No matter what the wind direction, the new one will be in play.

THE CHANGES: Two bunkers short and right of the green were replaced by one larger bunker positioned closer to the edge of the green. Also, some reshaping has been done right of the fourth green to create “broken” (i.e., uneven) ground.

THE IMPACT: “Bringing the bunker closer to the green again puts a premium on the approach,” Macpherson says, “and the broken ground will add a degree of difficulty to recovery shots. Personally, I would have liked the back edge of the bunker to be higher [in profile], so golfers would have seen the bunker from the fairway.”

THE CHANGES: The ground to the right of the green has been recontoured.

THE IMPACT: “It’s less natural in appearance compared to similar changes made at the fourth hole,” Macpherson says. “However, the idea is the right one, as this land was almost dead flat previously.”

THE CHANGES: The large depression in the landing area of the fairway has been filled in and a slight mound created. The area to the right of the green has been remodeled to create more undulations.

THE IMPACT: While the valley in the fairway was undeniably distinctive, it was also a maintenance nightmare. Says Macpherson, “This renovation was driven more by the Links Trust, which had difficulty keeping turf in the hollow because of the divots.”

THE CHANGES: A fairway bunker has been added short and left of the green, about 25 yards to the left and diagonally toward the green from the last bunker on the right side of the fairway.

THE IMPACT: This drivable par-4 has always sported the dullest terrain and green surrounds on the Old Course, so anything that adds interest is an improvement. “I think they could have done more with this hole,” Macpherson says, “but [at least] the new bunker pinches in the approach to the green.” THE CHANGES: The back portion of the green has been lowered to create more hole-location options.

THE IMPACT: Although seemingly subtle, this alteration is by far the most controversial, as purists rail against any transformation of one of golf’s most revered par 3s. “The back left corner of the green has been slightly reduced in height so that the contours closest to Hill Bunker could be softened,” Macpherson says. “Because of the slope, a pin position here was previously impossible when the green was running at speeds over 10 on the Stimp. If the cost of bringing the famous Hill Bunker back into play is adjusting the contours of the green, it might be a price worth paying.”

THE CHANGES: The ground to the back right of the green has been recontoured to create more undulations.

THE IMPACT: Additional variety and interest on recovery shots to the green.

THE CHANGES: The Road Bunker has been widened on the right by half a meter, and a small portion of the front of the green was recontoured to enable it to gather more approach shots.

THE IMPACT: Minor, says Macpherson. “In my view, these changes are less significant than previous changes made to the Road Hole Bunker, and they’ll be unnoticeable to many people— even those who claim to be familiar with the green.”