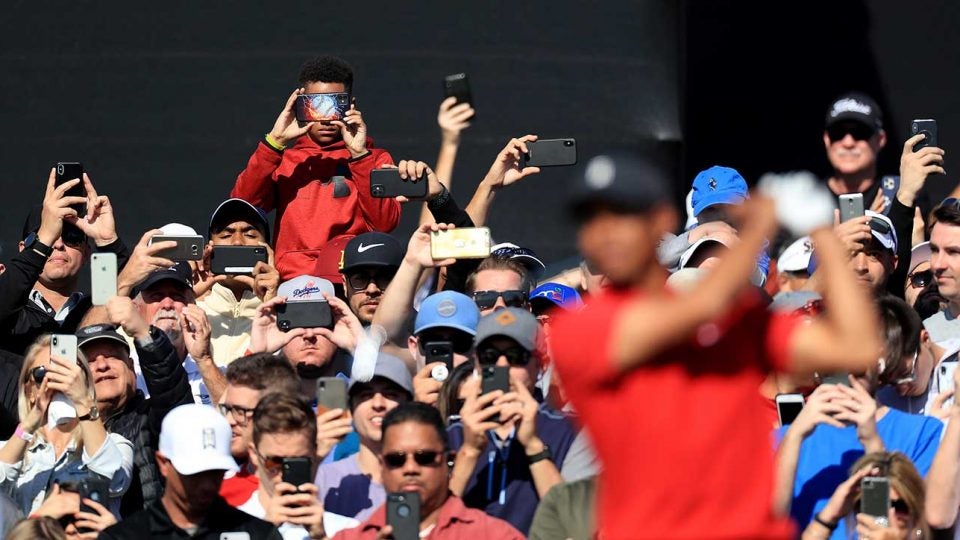 As the golf world takes a pause, let's a take a look through some of the best moments of 2020 so far.
Getty Images

The 2020 Players Championship (and all golf through the middle of April, for that matter) is no longer. It was certainly the right decision by the PGA Tour, but being right doesn’t make the situation any less disappointing, concerning and sobering.

While there’s nothing we can do to get golf back on your television screen, we can bring you through golf’s dark month with us. Today, we’re taking a look through some highlights you might have forgotten from the early portion of the 2020 season.

It’s not ideal, but it’s a heck of a lot better than nothing:

News
As we grapple with a crisis, golf matters now more than ever

1) Tiger’s dunk-and-out at the Farmers

Tiger Woods was near the top of the leaderboard on Sunday at the Farmers Insurance Open, seeking a record-breaking 83rd career victory. Making his way down the front nine, Woods dunked his approach shot in the cup from the middle of the fairway, only to have it bounce off the bottom of the hole and back out. In all, the crazy shot led to a tap-in birdie for Tiger, who faded down the back nine as Marc Leishman took home the victory.

2) A left-handed save from Justin Thomas

Nobody tell Phil, but the best left-handed save in 2020 might belong to a right-handed golfer. Justin Thomas’ miraculous play from the trees at WGC-Mexico in late February deserves kudos from everyone, even the native left-handers out on Tour.

Seriously, we have absolutely no idea how this shot from Sungjae Im on the par-3 7th at the WGC-Mexico Championship happened. But it did. Sure, we’ve seen players skip shots across the water at the Masters, but that involves far different science than what Im’s shot did. We may never know how it happened, but that doesn’t mean we’re going to stop watching.

He’s the second-best player in the world. He’s been on a 6-month-long heater. He’s nearly landing his tee shots in the hole on a fly. What can’t Jon Rahm do? This ace on 17 at the WGC-Mexico Championship only adds to the legend.

Webb Simpson's first ace on Tour earned him a share of the lead at the Waste Management Phoenix Open 🙌pic.twitter.com/CT4FBBBJUF

If he tells the story convincingly enough, nobody will realize Webb Simpson’s first PGA Tour ace came on par-3 BEFORE the so-called “loudest hole in golf,” the 16th at TPC Scottsdale. Still, Simpson’s ace (in an event he later won) is a “one” for the books (*ducks*).

He put on a show at Pebble Beach. pic.twitter.com/Yimn6KBlIm

Sometimes, you’ve just got “it.” In February, Phil Mickelson had “it” with his wedges. Lefty holed out not one but TWO shots from off the green on back-to-back holes to remain in contention at the AT&T Pebble Beach Pro-Am. When the dust settled, Nick Taylor outlasted Phil, but those pair of finishes were ones we wouldn’t soon forget.