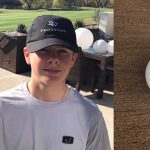 Hughes Petri with the Rory McIlroy tee ball he rescued from his family's pool.

AUSTIN, Tex. — Fourteen-year-old Hughes Petri had a big assignment awaiting him after he finished math class Wednesday morning: handling standard-bearer duties for Kevin Streelman and Viktor Hovland’s match in the first round of the WGC-Dell Technologies Match Play Championship.

But when he arrived back home, to his family’s house along Austin Country Club’s 5th hole, Hughes first had to take care of one other pressing order of business.

“He couldn’t get out to the backyard fast enough to scoop up the ball,” Hughes’ father, Chris, said in an interview Friday morning.

Rory McIlroy’s ball, that is, which by this point was already Twitter famous for settling in the depths of the Petri’s swimming pool.

The ball was already the talk of the neighborhood, too. Ask William Petri, Chris’s father, who lives a few miles from the club.

“My phone started ringing off the hook with three or four friends saying a golfer just hit a ball into Chris’s backyard pool,” William said. “We had just been over there a week ago, drinking wine in the backyard, overlooking the pool and knew exactly what they were talking about.”

In case you missed it, McIlroy had a rough opening match at Austin CC, losing 6 and 5 to Ian Poulter. Among McIlroy’s lowlights was his tee shot on the par-4 5th that hooked … and hooked … off the course and onto the Petri’s property. The wayward drive skirted the Petri’s new stone encircled hot tub before kerplunking in the pool.

“To be fair,” Chris said, “Rory was hole high and only about 30 feet to the left, so it really wasn’t that bad of a shot. We’ve been in the house about a year and we collect about one ball a week, but I don’t think anybody has ever hit driver into the pool like Rory.”

Later that day, when Hughes was working the Streelman-Hovland match, he spotted McIlroy near the clubhouse and couldn’t resist approaching him.

When Hughes informed the four-time major winner that he was in his possession of McIlroy’s water ball, McIlroy responded with a rueful smile then gifted Hughes another ball for one of his buddies.

Did Hughes consider returning McIlroy’s original ball? Not so much.

“I think you’re going to have a hard time prying the ball from Hughes’ hand,” Chris said. “We’ve had a lot of fun with this. All my golfing buddies who have hit it in the pool before have texted me to say they aren’t the only ones now. I’ve heard from people all over the country who saw it.”