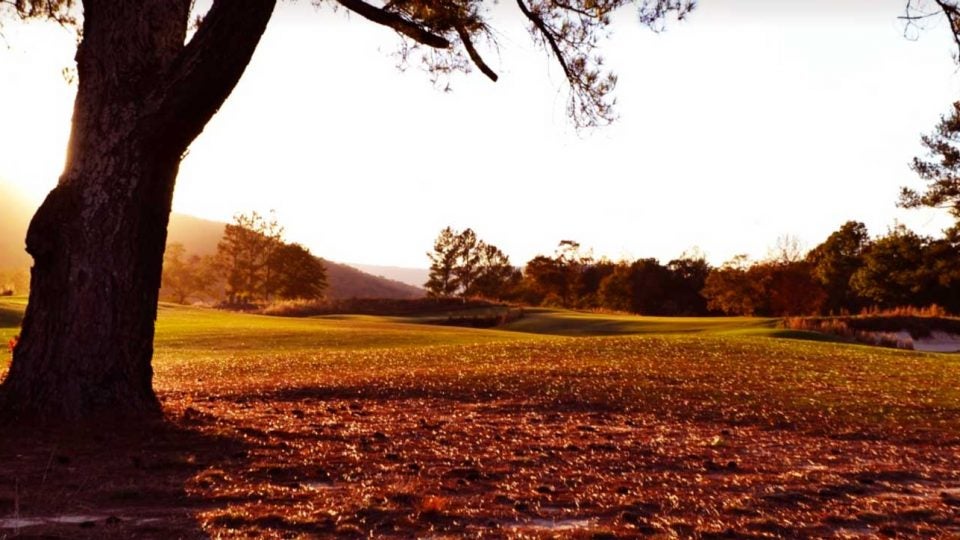 It’s a sweltering midsummer day in upstate New York, and Tad King is behind the wheel of an old white Toyota Tundra, cackling as we bounce along a swath of shapely earth that he identifies as the 6th fairway.

“Oh, you’re gonna die when you see this green,” King says. He hops out the side of the cab and leads me up onto what will become a putting surface so massive and contoured that it’s hard to grasp. In the pre-grassing phase, this is all just carefully configured dirt. But with King as tour guide, it comes alive. A dramatic swale lingers on the left side of the green, deep enough that it’s partially obscured from the fairway, welcoming well-placed shots and ensuring a healthy chance at a hole-out. A pin on the right ridge, on the other hand, is nearly inaccessible from the right side of the fairway. Strategy and variety are baked in everywhere.

That’s just the beginning of this putting surface. King points out the outline of the green’s edge as we climb a slope: this lower section connects to an upper section via an hourglass-shaped sloping funnel. This is a double green: No. 6 occupies the lower section, while No. 3 owns the upper section. In all, the green rises 20 feet from bottom to top, and it’s a rollicking 25,000 square feet of interior slopes and peninsulas caping off to the sort of short-grass collection areas that get King — and design partner Rob Collins — so excited.

Tad King and Rob Collins are the two halves of a golf course design-build team best known for creating Sweetens Cove, a revolutionary nine-hole design carved out of a featureless floodplain in rural Tennessee. King’s official title is Managing Director of Construction. Collins is Principal Designer. Sweetens has become a nine-hole holy site, and the partners who brought it to fruition have become cult heroes among the course architecture set. But Sweetens Cove was also the only King-Collins golf course in existence — until now. Their team has been secretly working all summer on a new nine-holer in Accord, New York — a bold new design that they’re confident will live up to the hype.

There’s no name for this course yet; that, plus site maps and images, will come with a more formal unveiling. But if you stand up above the 4th tee, the highest point of land on site, you can squint across the property and convince yourself you’re at Sweetens. Crazy-wide fairway corridors. Rollicking greens. Ambitious bunkering. A flood plain in the foreground framed by Appalachian mountains rising up behind. Fresh air. Room to breathe. Small-town America.

Golf course construction doesn’t happen quickly. That’s partly to blame for King-Collins remaining on the sidelines these last few years, despite an unparalleled string of rave reviews. But Collins still credits the constant wave of positive feedback with delivering this opportunity.

“Sweetens Cove has turned itself into this perpetual publicity machine, which none of our competitors have,” he said. “Even when it opened, we hoped there would be some attention around it for a little while. We had no idea it could still be going, y’know, years later.”

But in late 2017, a group of New York-area business partners approached King-Collins with a proposal. They had their eye on a golf course in New York — and they had a particular directive. “They wanted the full Sweetens Cove effect,” Collins remembers. “They were clear: Don’t hold back. Give us what you’ve got.” The golf course site was 55 acres and belonged to Rondout Golf Course, a mom-and-pop local track in need of an update. This would turn out to be much more.

RELATED: What’s up with Sweetens Cove? 9 observations from an average golfer’s first trip

King, who has been in the business for more than 30 years, never remembers having this type of freedom. “I’ve seen a ton of golf in my career, but you rarely get a client that lets you see what you see and just cuts you loose. It’s a blast. It’s been so much fun.”

The Sweetens Cove "wow factor" is coming just north of New York City 👀. @Sean_Zak and @dylan_dethier caught up with course designer Tad King to discuss the secret (until now) project that should have golfers everywhere excited.

Rather than resisting comparisons to their first design, both are embracing the idea of a Sweetens sequel. A friend recently visited the site. After a short walk around the property, he chuckled and gave a succinct review.

“This is the back nine!”

Upon arrival in the pro shop, players might glance out the window and not believe their eyes. A green over an acre in size stretches out in all directions. Over an acre in this case translates to some 46,000 square feet. The reason it’s so big? It’s actually three greens in one. The practice putting green shares a continuous surface with the second and ninth greens, one undulating monster. The greens and surrounds are what King calls the “lifeblood” of the place, which makes this opening vista a nod to the course’s identity, and to its designers outside-the-box thinking.

As players climb the first hole, they’ll find a visually intimidating target before them. The back of the green drops off, infinity-pool style, and a gnarly bunker lurks behind. But the entire thing is an illusion. “That’s a little bit of conceal and reveal. It’s not until you get up to the green that you see the bunkers are actually dug into the hill that’s closer to the next tee,” Collins adds. “It’s a depth perception thing.”

The second hole, another par 4, wanders back toward the pro shop and the mega-green. The third is a par-3 that tips out at 220 yards; it culminates at that reverse Redan, hourglass-funnel double green that had King so excited. No. 4 is a reachable par-5 guarded by a barranca that will command every player’s attention.

Behind the par-3 5th green lurks a massive gouge of a trench bunker. “My gosh, it’s serpentine, it gets wide and narrow — it’s probably the coolest I’ve ever done,” King says. Collins agrees. “Absolutely, without a doubt the craziest bunker he’s ever done.”

(LISTEN: You can hear Tad King’s interview in the podcast below)

Then comes the lower side of the radical 3/6 combo green, some two stories below the green’s height of land. The 7th is “a short par-4 gone mad,” while 8 is another gettable par-4 but features water short and right. Many design firms would relish the opportunity to include natural water features. For King-Collins, the five acres of lakes were a nuisance, threatening to gobble up golf balls and limit potential routing options. This duo wants to keep your ball out of the water. Trench bunkering. Catch basins. Shot-saving slopes.

The course concludes with a long par-5 along a boundary line and back toward the pro shop. But it doesn’t really end there. Alternate routings will exist across the property, secret tees that play to secret holes, endless opportunity for cross-country golf. Permission to explore.

What all those features contribute to is what Collins describes as “experiential” golf. “It’s the details of creating an experience, of all these mini experiences,” he says. “Taking on that crazy bunker, or seeing how a ball is going to react off a slope. Maybe it’s an artistic thing, how a green contour or bunker face is going to look. All the weird stuff we do, it’s a little bit off, it’s different than normal, but people really seem to connect with it.

“I don’t know if that level of boldness is warranted on every site, but you want the wow factor? Dude, you’re getting the f—– wow factor.”

Now that the project has cleared its last bureaucratic hurdle from the state of New York, King, Collins and their client are eager to get going. The plan is to begin grassing as soon as next week and complete the process by the second week of October. From there they’ll hope for an Indian summer and fast germination. Before long, visible contrast should be clear between the fairways and the native grasses that line them.

King emphasizes his desire to empower a small, hardworking team, and he’s overseen plenty of the work in person. In the same way that Sweetens was in Collins’ backyard of Chattanooga, Tenn., this site is closer to King’s residence in Connecticut. That means he’s been the guy on the ground the most often. “That’s his great expertise, making things happen on site, implementation — we’re 50 percent partners for a reason, neither of us could do what we do without the other.”

Plenty of their work is already complete. Revered shaper Gus Grantham is on to the next project. Kyle Truax, a summer intern who refers to himself as a “King-Collins disciple” is back to his landscape architecture graduate program. Harry Dorsey, a local guy with no prior golf course experience, is staying on as lead foreman. They expect to lean on a combination of experience and talent operating the course day-to-day. A course is only as good as its caretakers.

The ambitious timeline targets preview play sometime in the spring and a soft opening by next summer. The clients have bigger plans for other parts of the property, but Collins and King are focused on the golf course itself. That’s the anchor. 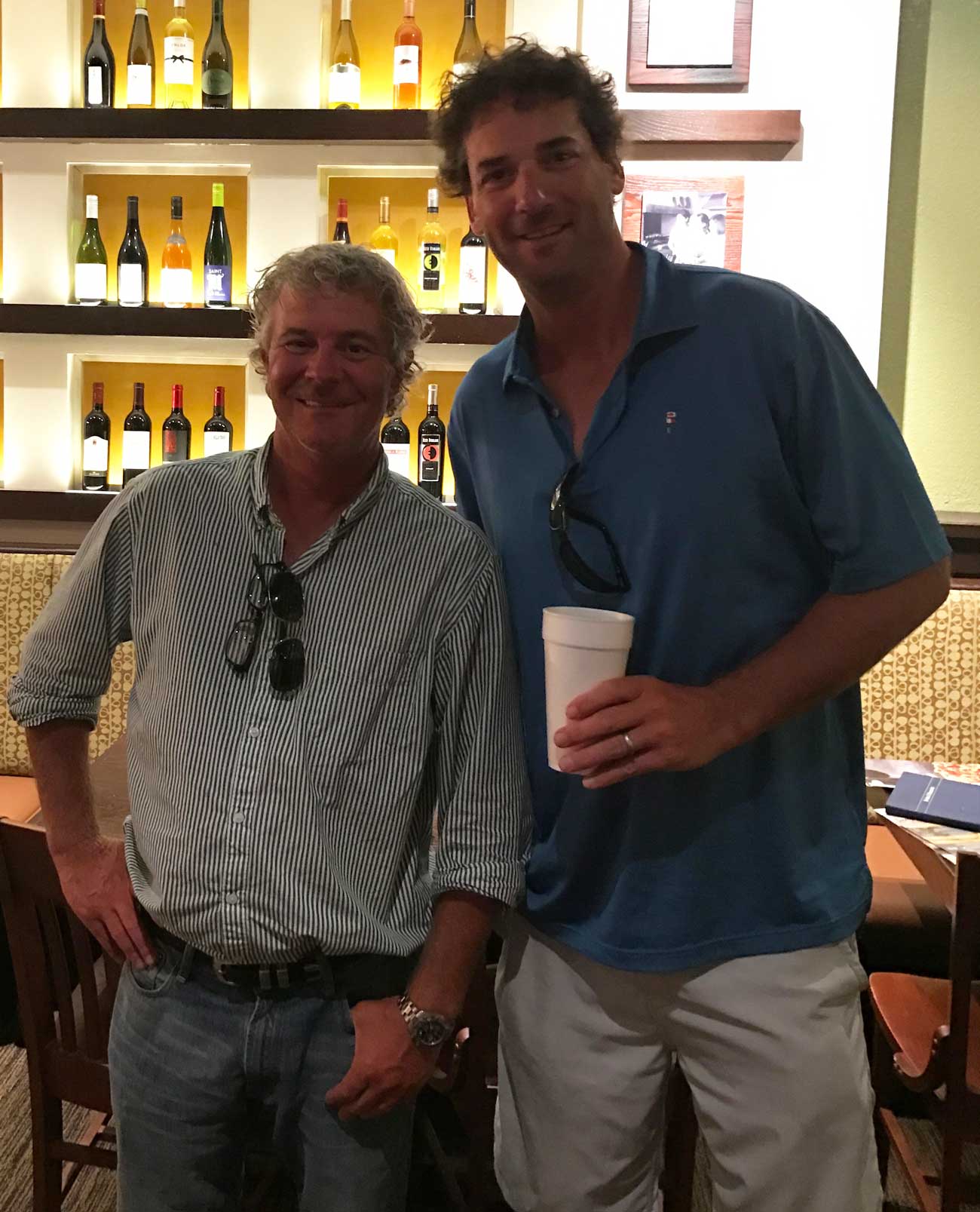 “I don’t want to jinx us, but the phone’s been ringing a lot,” King admits. “We’re in a fortunate position where we can actually start saying no to stuff.”

That’s a new feeling for a pair who have fought tooth and nail to get to this point. Their next “yes” just came through the wire: Landmand Golf Club in Homer, Nebraska. The pair speak effusively about the site they’ve been given (that’s “unbelievable” from King and “ridiculous” from Collins) and expect to break ground there, soon. King insists that’s not an opportunity they’ve taken for granted — and that not taking anything for granted is their very identity.

“We’ve made a firm commitment to each other that we’re not going to overextend ourselves and lose quality. That’s really important for King-Collins; if we take a project it’s going to get 100 percent of the attention that it deserves, and we’re both proud of that.”

It’s an ethos built on experience. King and Collins align completely on how they want to build golf courses in part because it’s how they initially got connected. Their origin story begins in Naples, where the two met on a job site and were dismayed by the process they were forced into. “We saw the dysfunction of the way the whole operation was put together. You can’t draw a golf course in an office, you really can’t,” King insists. “And unfortunately the large design firms, the signature ones, you have to have formal square footage for everything. And as soon as you try to modify any little thing in person, you have the contractor starts screaming, ‘Change order! Change order!’ It doesn’t make sense.”

The partnership was sealed in a Carrabba’s in southwest Florida. You know the rest.

Where they differ is in their knowledge of course architecture. “Rob’s great, he’s a scholar of golf course architecture and partly why we work so well together is because I don’t have a desire to become an expert on that stuff,” King muses. “I like to work off raw imagination, not have template holes in my mind all the time. What he sees and what I’m thinking seem to complement each other in a way that works.”

They work best because each is comfortable being himself. That’s the King-Collins way. And nine more holes in upstate New York has them dreaming big.

“Don’t get me wrong, because I have taken a tremendous amount of inspiration from them,” Collins says, carefully but certainly. “I have absolutely zero desire to be the next Tom Doak, the next Bill Coore. I want to be Rob Collins. He wants to be Tad King. We want King-Collins to forge a new and different path.”