Steve Stricker reveals clever time when he would have paired Bryson, Brooks 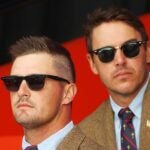 Bryson DeChambeau, left, and Brooks Koepka, during the opening ceremonies at the Ryder Cup.

Had the United States been down entering the final session of group play at last month’s Ryder Cup, and had his team needed a jolt, Steve Stricker was ready to light Whistling Straits up with the combustible couple.

“We kind of had it in our back pocket for like Saturday afternoon if we needed it, if we were down and we wanted to provide some sort of lift or spice to the team,” the American team captain said Thursday ahead of his play this week at the Furyk and Friends tournament on the Champions Tour. “But again, we talked about it; all our assistants talked about it. We felt like it may have been — if we did put them together, that that story would have been bigger than the story itself, you know, the team and trying to win the cup. So we kind of shelved it, I guess.”

In what turned out to be an eventual American landslide, the U.S. won the first three sessions, led 9-3 entering Saturday afternoon four-ball play and never needed the dueling duo together. Still, after two-plus years of bickering and Brooksies, even the thought of seeing Koepka and DeChambeau playing Ryder Cup best ball would seem outrageous.

Or maybe not. On Monday of Ryder Cup week, Stricker said their feud would be a “non-issue,” and after the Americans clinched on Sunday, he revealed the duo came to him earlier wanting to be partnered if need be. They even hugged in the closing press conference, and on the day after Thanksgiving, they will play mano a mano in Vegas in the fifth version of the Match.

“That’s how close this team became,” Stricker said. “To have these two guys that, you know, seemed not as very close that ended up giving each other a hug in the press conference at the end, yeah, it was really kind of a magical week and a magical thing that happened with those two guys. It’s good to see them kind of put it aside for this thing to happen.”

Also Thursday, Stricker was asked for his “most-nervous moment,” and that, too, involved Koepka and Saturday afternoon four-ball. While the Americans were up six, Stricker said he had been told that Justin Thomas “looked a little tired,” so he broke up the pairing of longtime friends Thomas and Jordan Spieth, benched Thomas and sent out Spieth and Koepka together.

“We told the guys earlier in the week, like listen, four-ball, just be prepared that you could potentially go out with anybody,” Stricker said. “Like I said, all these guys got along really well with each other, we felt there was a ton of different combinations that could happen, so it was a little bit of a blindside to Jordan because quite frankly, and Jordan wasn’t very happy with me and they’ve been — that story goes back a long ways because they’ve been in my head, pocket, Jordan and JT, for a long time wanting to play best ball together and then they end up not even playing together.

“But it’s all good. You know, again, it was about the whole, the body of work as a whole and whatever we could do to win this thing. The guys bought into that, and I can tell you that no one really was upset the whole week, which is tough to do, as you know, in a Ryder Cup to please everybody, and to play well at the same time. But I think it goes back to that communication and how we were able to prepare these guys and they knew where they were going and they knew what they were going to do.”