Spieth in the spotlight, Koepka’s knee and other Masters day 1 observations 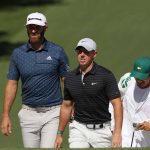 Dustin Johnson will embark upon a repeat bid at Augusta National on Thursday.

AUGUSTA, Ga. — The last of the Monday crowds at Augusta National trickled out of the tournament gates shortly after 6 p.m. local time. At 5:45, a small group of onlookers surrounded the last remaining golfer on the practice range, Joaquin Niemann. Next to Niemann was a man in a green jacket, who briefly chatted with the 22-year-old before continuing on his way toward the hospitality area.

From the other side of the ropes, a patron spoke up.

“Thank you so much,” the man said to the green jacket.

The late-afternoon sun shone over the practice area, casting long shadows from the oaks on either side of the range. Across the way, brilliant pink azaleas floated in full bloom.

“Don’t thank me. I didn’t do anything,” the green jacket replied.

“I had to tell someone,” the man said again. “This place is the real deal.”

If it were ever in doubt, Augusta National is back to its usual self in its usual month.

The golf course looked every bit as green and pristine as advertised on Monday, the first day of tournament week, as pros began to arrive for practice rounds and range sessions.

It’s been a busy few days for the green jackets, who can be spotted lingering around much of the course’s famous iconography at most hours of the day. Over the weekend, they hosted the second Augusta National Women’s Amateur and the annual Drive, Chip and Putt contest.

Now, both the green jackets and the golf world look forward to the 85th playing of the Masters. Here are seven first impressions from day 1.

Jordan Spieth enters in the spotlight

It’s been a minute since Jordan Spieth could be considered a favorite at the Masters, but a quick glance at the betting odds Monday confirmed what many already knew: Expectations are high for the three-time major champion at the 2021 Masters.

Spieth’s confidence was palpable at a press conference just minutes after flying in from San Antonio, the site of his first win in nearly four full years.

“I wanted that monkey off my back,” Spieth said. “It’s actually been a lot easier for me, over the last 12 hours, to just look forward versus kind of looking back. That’s exciting.”

He was careful to cage any talk of “getting hot” at Augusta National. But it’d be hard to find a golfer peaking at a better time than the 2015 Masters champ.

“I certainly wouldn’t mind that this week if that’s what you’re asking,” Spieth said. “I think I also like to step back and think, yeah, I’m 27, and a lot of people’s careers get started at 27 in this sport.  Phil was, what, 31, when he won his first major and had a major championship career after he won his first major. So there’s a lot of ways to look at it.”

“I think for me it’s not forcing into kind of the here and now and more just taking the patient route and taking the momentum route,” he said. “Just try and do something just a little bit better this week than you did the week before; trust something you didn’t trust the week before and pull it off and gain that confidence.”

Fans — erhm, excuse us, patrons — are BACK at Augusta National. A not-insignificant number of spectators could be spotted around the grounds at Augusta on Monday, which would seem to be an encouraging sign of things to come in the “roar” department.

The crowd on Monday was comparable to the one that followed the final round at the Augusta National Women’s Amateur on Saturday. While that’s certainly very many fewer than we’ve come to expect from Monday at the Masters, it was good to see (and hear) something other than the pines at Augusta National.

Brooks Koepka is in the field this week at the Masters mere weeks after left knee surgery of unspecified severity. He’s surely been grinding to get his body in tournament shape, but watching him at Amen Corner this afternoon, it’s hard not to come away with the impression that he’s playing the week at well less than 100 percent.

He told SiriusXM’s Brian Crowell that he’s plotting out the “flattest line” to walk at Augusta in order to minimize the toll on his knees, a point that was clear watching him favor his right leg on the walk from the 11th green to the 12th tee. On the bright side, his swing looked just fine — he had no trouble loading onto his surgically repaired left leg through the downswing.

Whoa, this place really *is* perfect

If there’s a blade of grass out of place on the golf course, I assuredly didn’t see it on Monday. Every single centimeter of Augusta National is as advertised — which is difficult to fully grasp until you’re standing in the middle of it. Horticulturally, the place looks brilliant. It is as if the green jackets used November’s earth tone-heavy Masters as a table-setter for an even-more-vibrant spring.

Dustin Johnson is back with a second-straight Masters on his mind. His champions dinner — featuring, most notably, pigs in a blanket — is Tuesday evening. He looks like his usual self on the golf course. It’s hard not to come away thinking he’ll find himself at least in the conversation on the weekend.

Augusta could get tricky

The greens look fast and the conditions look firm, if notably less toothy than Saturday’s ANWA final round. Still, the course is in perfect shape, and Augusta’s legendary Subair system should be working the putting surfaces to perfection this weekend. As for what that means for the weekend? We could see a traditional Augusta setup — so long as the weather cooperates.

“I think if you get the weather that — if the membership here and those who are setting up the golf course get the weather they want to get — they like to see tournaments like 2014, 2016, a little bit ’17, where it’s potentially less than 10‑under par is a winning score, where it requires a lot more kind of course knowledge where you leave the ball and you have to hit an even more precise shot to get it where you want it to go,” Spieth said. “I think the firmer the better, the way this golf course plays.”

A Masters eight decades in the making

Tyler Strafaci is playing in his first Masters this weekend as the reigning U.S. Amateur champion. Eight decades ago, his grandfather Frank Strafaci was a decorated amateur golfer, and in 1938 was invited to play in the Masters. After three rounds in the tournament, he was forced to withdraw from Augusta National in order to compete in another event and maintain his Walker Cup eligibility.

“It just shows how different the tournament has changed over the years where my grandfather actually withdrew from the Masters to play in a tournament other than the Masters,” young Tyler said.

This weekend, Strafaci hopes to become the first member of his family to complete his first week at Augusta National. Should the 22-year-old make it to the weekend, rest assured he’ll complete it.

“If I did that, I don’t think I would ever be invited back,” he said.