Spieth feeling confident in Hawaii, ready to be ‘the man in the arena’ in 2018

Jordan Spieth kicks off his 2018 season this week at the Tournament of Champions in Hawaii. Coming off a huge season that saw him capture his first British Open title, the three-time major champ is brimming with confidence and excitement for the new year, a fact made clear by his comments during his pre-tournament press conference Tuesday at Kapalua.

Spieth began by noting that in 2018 the current crop of young stars are set to do battle with a seemingly healthy Tiger Woods. 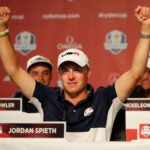 You may also like Shots of the year (and how to hit them!): Jordan Spieth’s Royal (Birkdale) flush

“I think this year, 2018, the unknowns are very exciting right now. I think with the amount of depth and talent at a younger age mixed with the guys in their 30s that are playing, No. 1 in the world, D.J., what is he? 32 or something. Some other phenomenal players that you would call maybe in prime, right. And then, obviously, the major question, which is, what’s it going to be like with Tiger coming back,” Spieth said. “So I think 2018, these unknowns are extremely exciting… it’s a pretty special time to be a part of professional golf.” But most of the media session was devoted to Spieth’s comeback in 2017 after a disappointing ’16. He acknowledged the lingering effects of his 2016 Masters collapse, and even admitted that those thoughts entered his head on the back nine at Royal Birkdale.

“I felt like that round was eight hours long because of the stuff I was juggling, the comparisons I was making in my head to the Masters in 2016 at some point, to being able to shut that off and pretty much say, so what, if you don’t end up winning today it really doesn’t matter. You constantly put yourself in these chances in majors, and you should take enough confidence about being able to do that to recognize that the only person that’s going to get in the way from me doing that going forward is myself. And to not let anybody else get in the way.”

You may also like Did Jordan Spieth propose to his high school sweetheart Annie Verret? It sure looks like it.

“I think that 2017, the British Open, the Open Championship, it just did wonders for me individually. And not only my view of myself, but my view on being the man in the arena and being, I’m the one that’s out there, that’s putting it on the line every single week. I’m going to fail and learn and I’m going to succeed, but I’m the one in the arena.” Spieth continued. “I feel like I’m in a great place of who I am and what I’m doing going forward. And starting 2018 I’m kind of ready for anything. I’m ready for failure, for success, and everything in between.”

Spieth begins the first round of the Tournament of Champions Thursday at 5:50 p.m. ET.